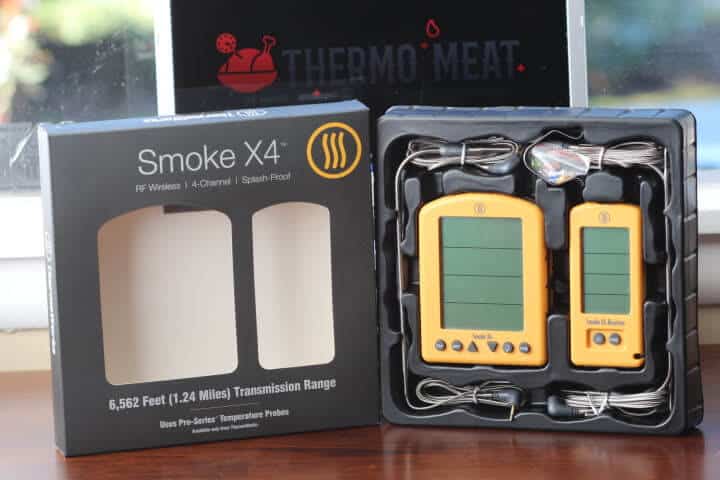 Is there even a need to review the Thermoworks Smoke X Longe-Range Wireless Meat Thermometer?

Like all of the reviews of Thermoworks thermometers, it’s not necessarily a review more than it’s an itemized list of how much better the thermometer is than all the rest. 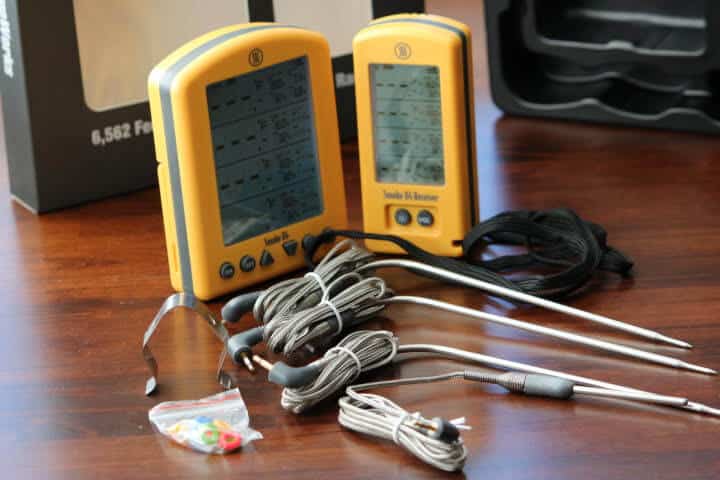 Yes, you can get another wireless meat thermometer that costs less but I guarantee your Thermoworks thermometer will still be around long after that one has gone kaput.

When you have a solid thermometer that you don’t have to worry about it saves your family and friends from eating your overcooked food. Sounds pretty good?

Just don’t wear the thermometer receiver around your neck and you’ll be good to go. 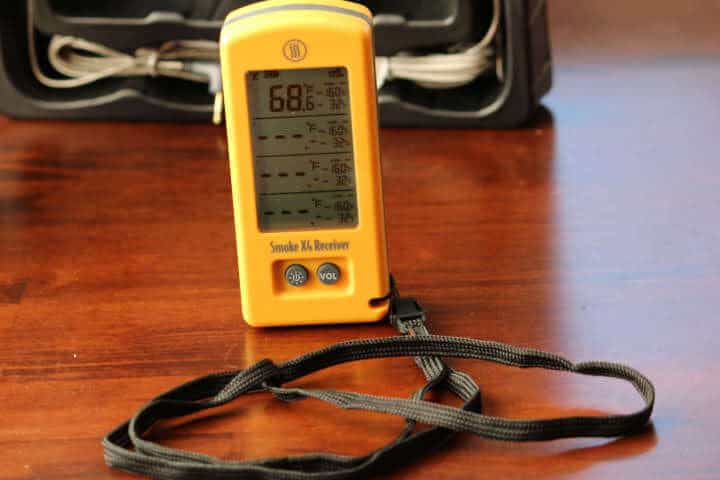 The Thermoworks Receiver comes with a sweet lanyard that you should under no circumstances wear in the company of someone who finds (found) you attractive.

So, how much is your future time and sanity while grilling or smoking worth? 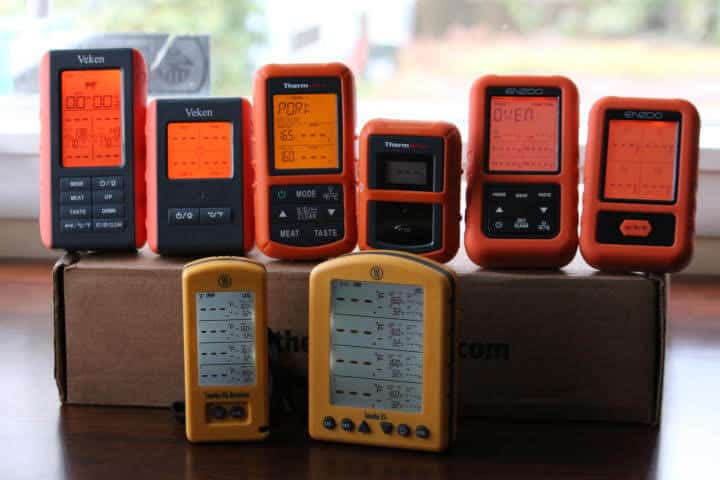 Like all of Thermoworks' products, the Smoke X is the cream of the crop in its category (Wireless remote meat thermometers). I've tested the wireless signal multiple times. Even in a dense urban neighborhood with a lot of houses and massive trees I received a signal 1100 feet away from my kitchen oven. This is through every obstacle you could throw at it. The strongest signal of any remote meat thermometer. All of this combined with the accuracy and durability of Thermoworks. It's legit.

The Value of the Thermoworks Smoke X4 Wireless Meat Thermometer

Thermoworks thermometers are more expensive than other thermometers. There’s a good reason for this. They are the highest quality thermometers you can buy. So you are left with the decision, do you want a thermometer to last a little while or for years to come?

I am not saying you can’t get a good thermometer for a lower price, you can. All I know is that I use Thermoworks thermometers as the guide by which I judge all other thermometers. I’ve had my original Thermoworks Thermapen for over 7 years and haven’t had to even change the battery yet. 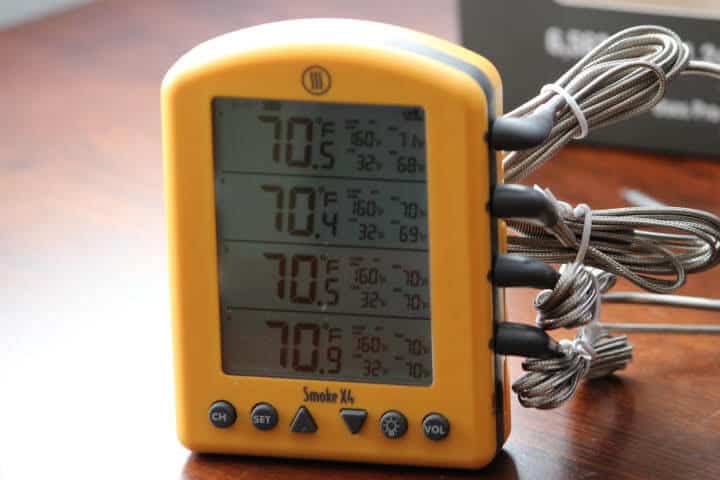 When I review any meat thermometer, I look at its features, usability, accuracy, durability, and what is most important for this review, its price and value relative to its competitors.

I’ll tell you right now that the Smoke X model from Thermoworks is the top performer in all of the first categories I just mentioned. That leaves us to discuss its price and relative value.

If you want a strictly wireless transmitter-to-receiver meat thermometer and plan on grilling and smoking for the foreseeable future, this would be a wise investment.

Why is the Thermoworks Smoke X a great wireless meat thermometer? Let’s take a look. 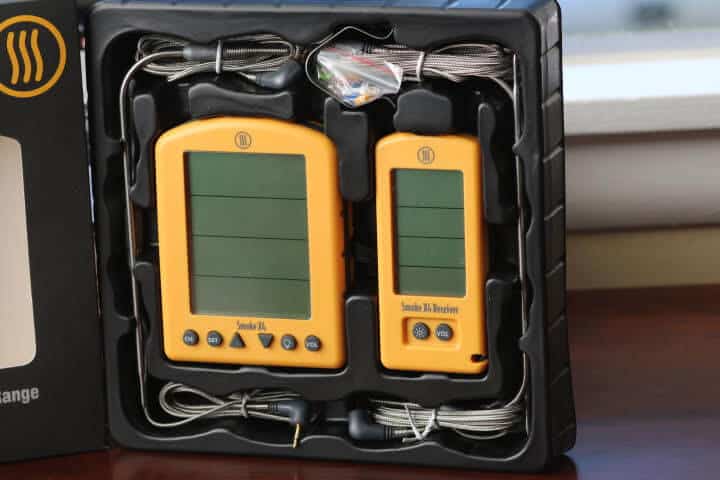 One transmitter, one receiver, four probes, one grill clip, colored grommets, lanyard…….wait, where’s the lanyard?! Oh, there it is, wheww! Close one.

The Features of the Smoke X4 Meat Thermometer

Before I delve into the features of the Smoke X4 I want to discuss its wireless transmission range. It’s the main feature that Thermoworks touts (it’s on the front of the box in large print) and is the focus of their advertising of this thermometer.

So, I consider this the best place to start.

This is the line-of-sight wireless signal distance you can obtain between the transmitter and receiver under the best case scenario. Unless you live with the Ingalls family on Little House on the Prairie you will not get this distance. Actually now that I think about it, they had a barn and some trees, so probably not even there either, but I digress.

This is based on no obstructions such as other houses, trees, walls, etc.

The video below replicates the classic grilling scenario where you give your friend Bob your remote meat thermometer receiver right before he flees your bbq.

All fictional and unrealistic scenarios aside, the Smoke X’s wireless signal is STRONG. My neighborhood has plenty of houses and massive trees to create a lot of havoc on a wireless signal, which can diminish due to many factors.

I used the Smoke X while grilling a chicken in my backyard. I put probes in both thighs and one breast and took a walk.

I should also mention I live in a hilly area. I received a signal between 1,100 and 1,200 feet away, two streets up and many houses and trees between transmitter and receiver.

Not 1.24 miles away, but the importance being the signal strength getting through all the obstacles. You most likely won’t ever need a range of over a mile unless you’re friends with Bob. At that point you might want to reconsider friends.

In case you were wondering what is the range of the other meat thermometers I’ve tested in my neighborhood, here they are: 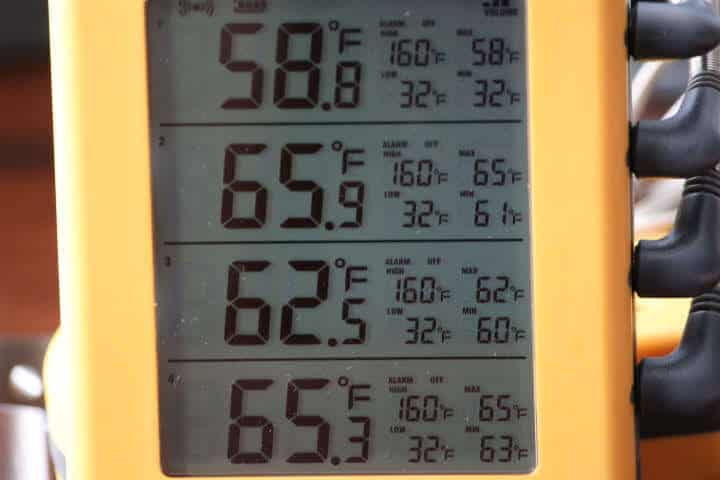 Here are all of the pertinent features of the transmitter unit of the Smoke X4: 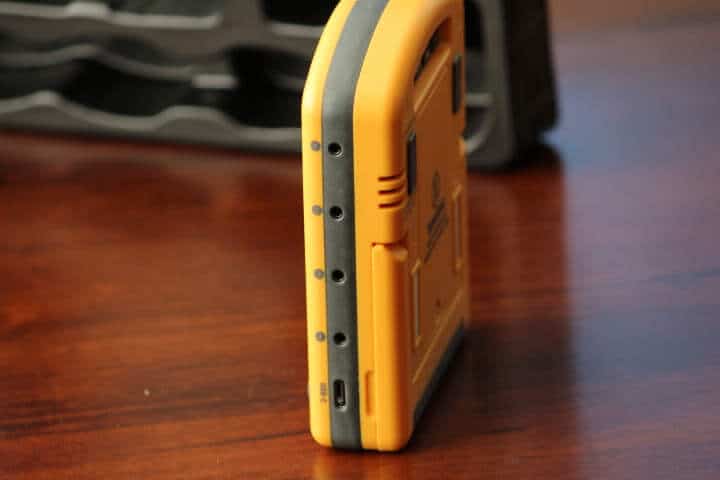 The Smoke X4 is accurate. Usually when I do an ice bath test I have to finagle the probes a bit to get close to 32 degrees Fahreneheit. This is what the Smoke X4’s probes look like still wound up, straight out of the box and plunged into ice water. 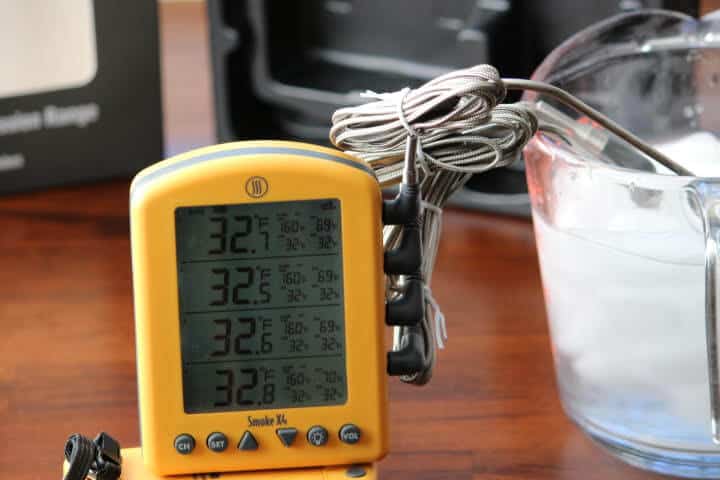 All of these probes are from Thermoworks top-of-the-line Pro-Series. The probes themselves have a maximum range up to 572 degrees Fahrenheit with the cables having heat resistance up to 700 degrees Fahrenheit.

The cooking probes are 6 inches long and both the air probe and cooking probes are attached to 47 inch-long cables. They also come with colored grommets to help you to easily determine which probe relates to what temperature port on the transmitter. 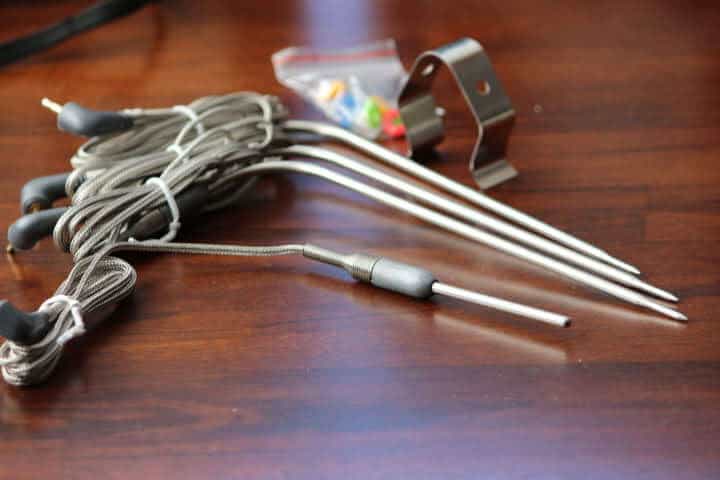 The buttons on the front of the transmitter make it relatively easy to scroll through the four different probe sections. You would press the CH button to do this. If you wanted to set an alarm for any of the probes you would press the SET button. Then just use the arrow buttons to adjust the alarm up or down and then press SET again to confirm your alarm.

You can also adjust the volume on the alarm which is nice. If you’ve ever woken up others because your bbq alarm was going off at 150 decibels then you’ll appreciate this feature.

The backlight button will keep the screen illuminated for 20 seconds, which is nice at night. Most of the other thermometers I’ve tested are usually only around ten seconds. Sometimes you need a little more time than that at 2 in the morning.

Both the Thermoworks X4’s transmitter and receiver units are water-resistant rated to IP 66. What does this mean? Well, they are good to go in a downpour outside but I wouldn’t play Marco Polo in the pool with them in your pocket.

I happen to live in a rainforest so I will give updates on this aspect.

As for the body integrity of the transmitter and receiver they are like all of Thermoworks’ thermometers, sturdy like tanks. 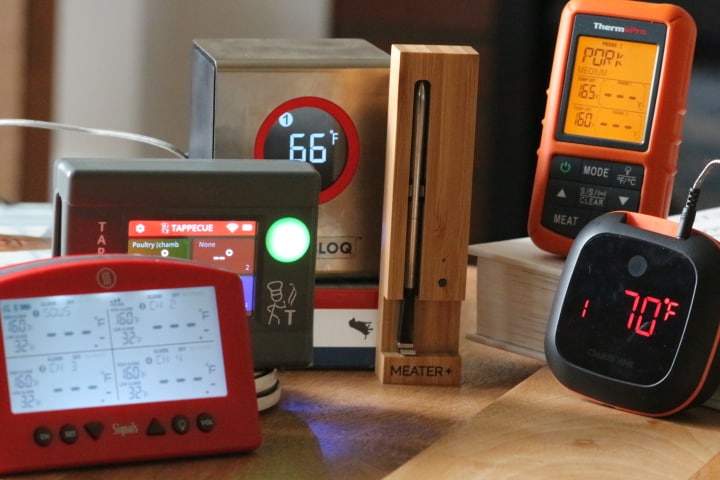 So many thermometers, so little brisket.

The Thermoworks Smoke X Meat Thermometer vs the Competition

Who are the competitors of the Smoke X and how do they compare? This list is strictly remote wireless meat themometers and doesn’t include Bluetooth or WiFi meat thermometers. (More on the differences and what type you should choose in a bit.)

Here are the other top-selling wireless remote meat thermometers you can choose from on the market, starting with the most popular first:

This thermometer has long been the most popular meat thermometer on Amazon for grilling and smoking. For good reason, it’s a dependable remote thermometer with pretty decent range. I’ve consistently gotten a 300 foot signal and it’s pretty accurate. There are some drawbacks but overall a good thermometer. Read my full review of the ThermoPro TP-20 here.

This is another top-seller in the remote meat thermometer category. It’s only drawback is that you can’t set a low temp alarm, which is critical when smoking. You need to know if you smoker’s temperature dips down too low on overnight cooks. Other than that it’s a pretty decent remote thermometer with a wireless range of over 400 feet. Wirel

You can read my full review of the Veken Wireless Digital Meat Thermometer here.

A relative newcomer to the remote meat thermometer space, the Enzoo wireless meat thermometer has a lot going for it. It boasts impressive wireless range. I’ve tested it and it exceeds 500 feet. Less expensive than the first two models on the list and features four probes with both high and low temperature alarm capabilities.

You can read my review of the Enzoo Wireless Meat Thermometer here. 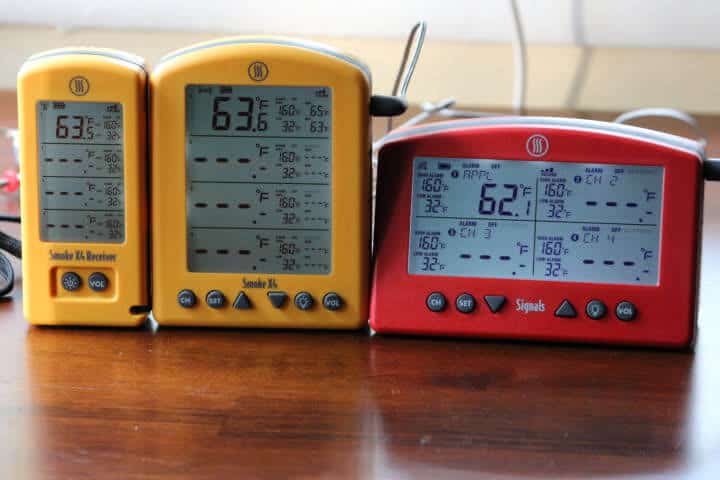 They are basically the same thermometer just with different formats. The Smoke X4 is basically what the Signals thermometer would be without WiFi or Bluetooth capabilities.

The specifications and details on the back of both the Smoke X4 and Signals boxes are pretty identical. Here’s a list of the similarities they share: 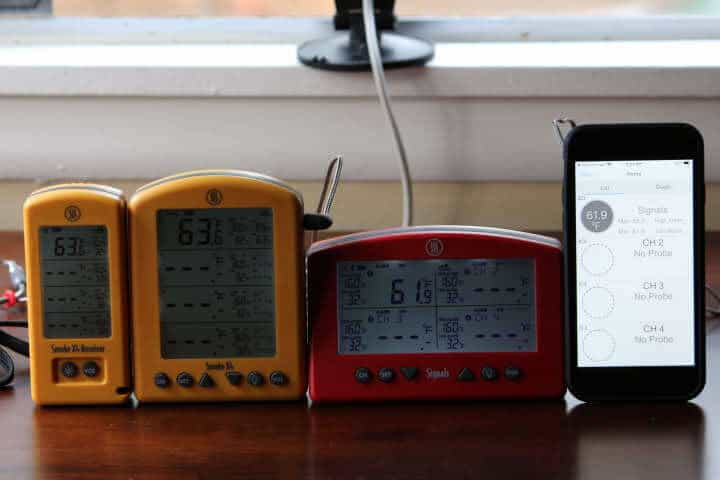 That’s my awesome phone that needs constant charging on the right. It’s connected to the Signals.

Which One to Choose?

I will say this, if you don’t really care about saving your cooking data, then I would definitely go with the Thermoworks Smoke X4 over the Thermoworks Signals. The Smoke X4 is ready to go out of the box and you don’t need to rely on other devices’ WiFi or Bluetooth capabilities.

If you are the type that likes controlling things from your phone the Signals might be better suited for you, just remember you are at the mercy of your phone or tablet’s connectivity. 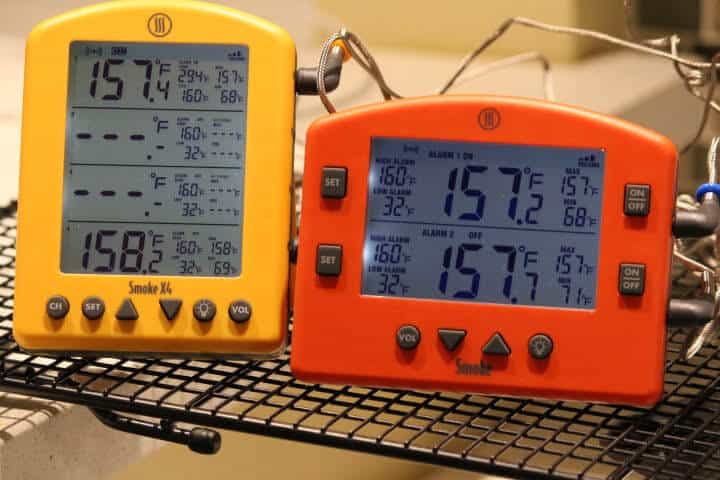 Here are the main differences between the Smoke and Smoke X4:

The Thermoworks Smoke X4 brings more to the table than any other remote meat thermometer on the market. It has best-in-class wireless range, features, accuracy, durability and it’s backed by the second-to-none customer service from the fine people at Thermoworks.

I’ll close with this. I bought my father-in-law a Thermoworks Classic Thermapen for Christmas 5 years ago. He still brings it up every time I see him because he loves that thing. That is the type of quality Thermoworks brings to all of its products.

I hope you found this review insightful, thanks for reading.