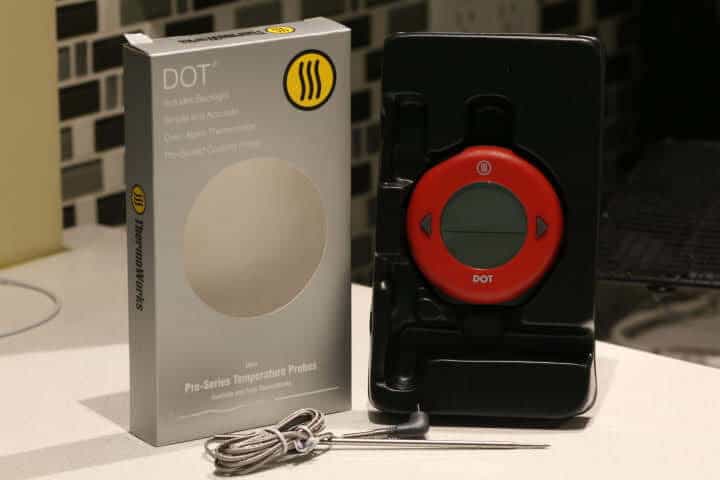 If you are unaware of the Thermoworks company, they make the best thermometers on the planet. Their DOT Oven Alarm Meat Thermometer is no exception.

The DOT combines Thermoworks’ best-in-class thermometry technology with a simplistic design that is effortless to use.

How easy is it? It’s got three buttons. 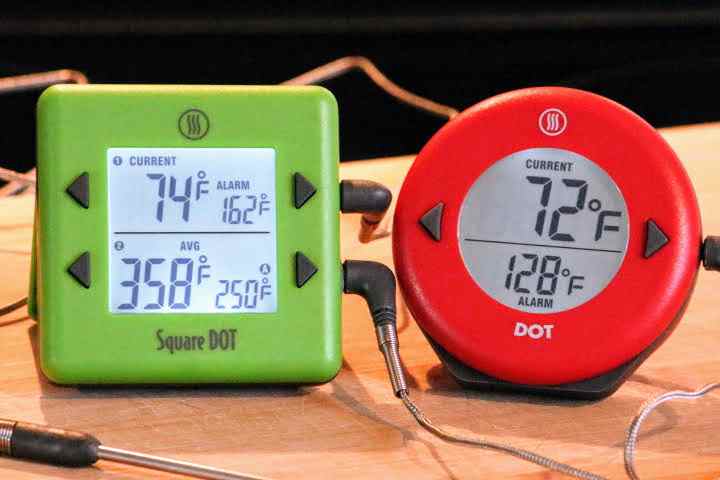 However, don’t be fooled by its simplicity, it has a lot of premium features underneath its spartan design. 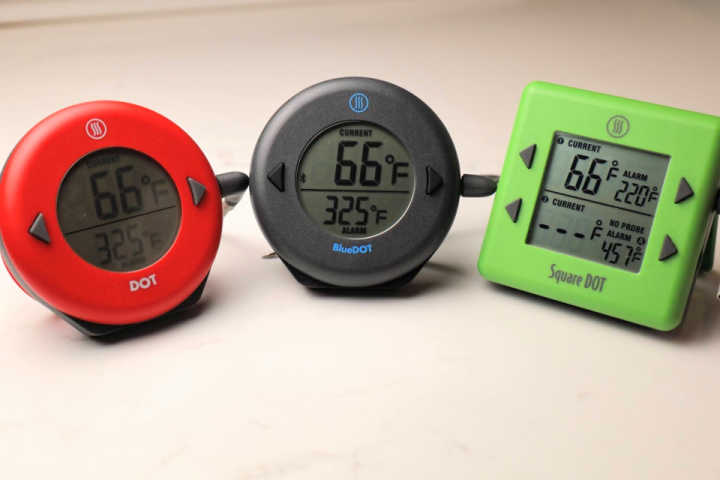 See my review of the Thermoworks BlueDOT Bluetooth Meat Thermometer.

Not only that, but it also has an added functionality that no one discusses when considering this thermometer. It’s actually pretty cool.

I will discuss what these features are as well as usability, accuracy, durability, and price of the Thermoworks DOT probe meat thermometer. 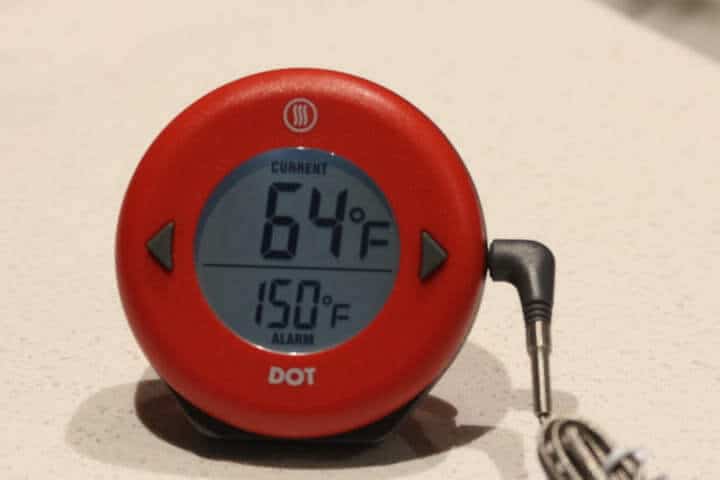 The Thermoworks DOT was made to do one thing, alert you when your food is ready to eat. The simplistic design features three buttons. That’s it. There are two arrow buttons on the front to set your target temperature up or down and there is a power/light button on the back.

You set your target temperature up or down and the DOT beeps when your food reaches that temperature. You then hit any button to quiet the beeping.

This is the easiest-to-use oven meat thermometer that you will ever encounter. 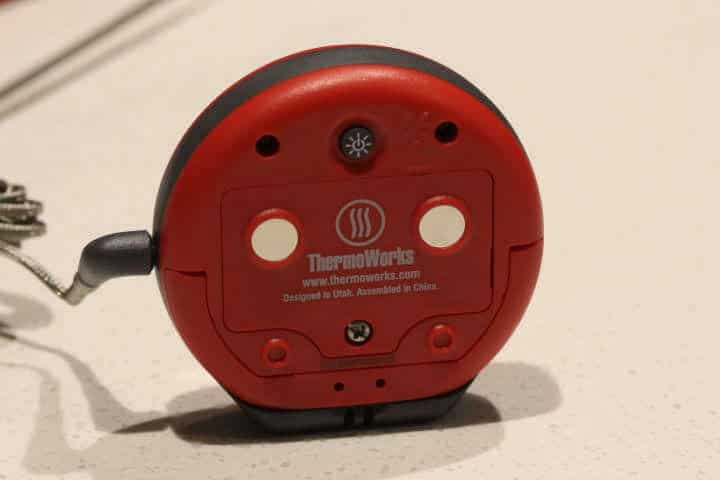 The back of the Thermoworks DOT thermometer.

As I alluded to before, there are a couple of things that make this thermometer an even more compelling option to consider when shopping for an oven meat thermometer.

The first thing I must mention is that this is the lowest-priced probe thermometer in the Thermoworks lineup. There are some instant-read meat thermometers from Thermoworks that are a little less expensive, but as far as devices with the ability to attach different probes, this is the entry point.

This leads me to my next point. You can attach any of the Thermoworks Pro-Series probes to the DOT. This opens up a whole bevy of options other than monitoring food in the oven. 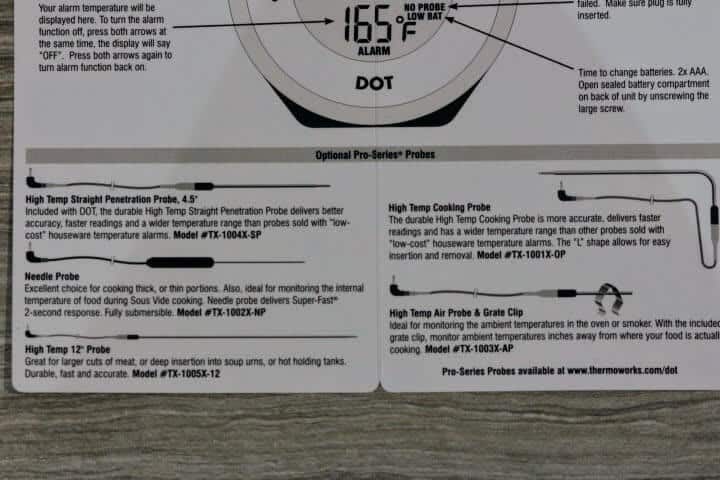 Manual displaying all of the possible Pro-Series probe attachments.

You could attach the 12″ High Temp probe and use it to monitor deep frying, home brewing, and big pots of soup, etc.

There’s a very thin needle probe that works great monitoring thin cuts of food as well as sous vide cooking. There’s also an ambient temperature probe that monitors the air temperature of your oven or smoker. Just be aware that there’s no low-temperature alarm, only high.

The main takeaway is that the DOT allows you to utilize some of Thermoworks advanced tools at a lower entry point price.

Features of the Thermoworks DOT Thermometer

The DOT only comes with one port for thermometer probe attachments. This was one of my main questions/concerns before purchasing. However, this shouldn’t be a problem for most oven cooking. Multiple probe options are nice but would defeat the intent and purpose of the DOT’s simplistic design.

The DOT comes with this probe which is part of the Thermoworks Pro-Series line of probes. These probes are more accurate and deliver faster readings than your standard oven probe thermometers. Thermoworks also includes these probes with their more advanced models like their Signals or the Thermoworks Smoke X4.

This is instruction card is not only the operating manual but it comes with a handy temperature chart for reference while cooking as well. It’s laminated so you can use it in the kitchen and it won’t get ruined if water gets on it.

Here are the other notable features of the Thermoworks DOT:

The temperature range of this probe is large like all of the Thermoworks Pro-Series Probes, so you could use this thermometer for higher temperature cooking situations such as hot oil frying.

The cable is 47 inches long. The cable, along with the probe are durable and can handle high-heat situations.

The IP rating of 65 means that it offers protection against low-pressure jets of directed water from any angle. So you can leave it in the rain for a bit and it will be ok. Or if you want to spray it with your garden hose for some unknown reason, do your thing.

The newest DOT model has backlight capabilities, whereas the original version didn’t have a light function. The screen stays illuminated for 10 seconds after pressing the power/light button once. 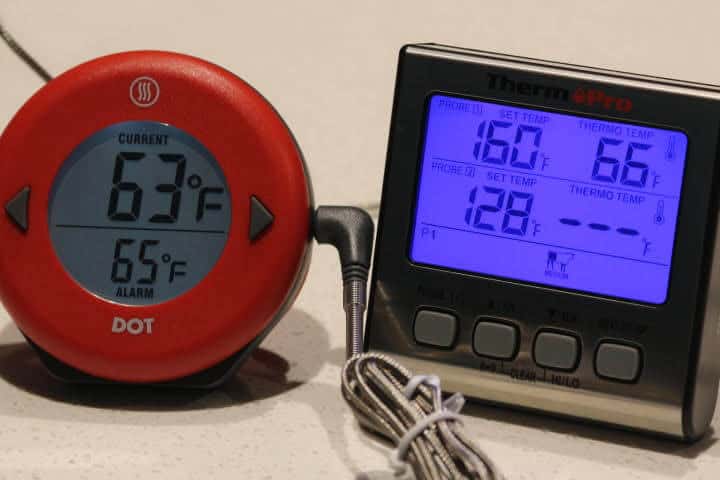 The one gripe I have with the DOT thermometer. The ThermoPro TP-17 Oven Meat thermometer wins the backlight contest.

The DOT has a little kickstand as well as a magnet on the back, allowing you to choose how to position it. 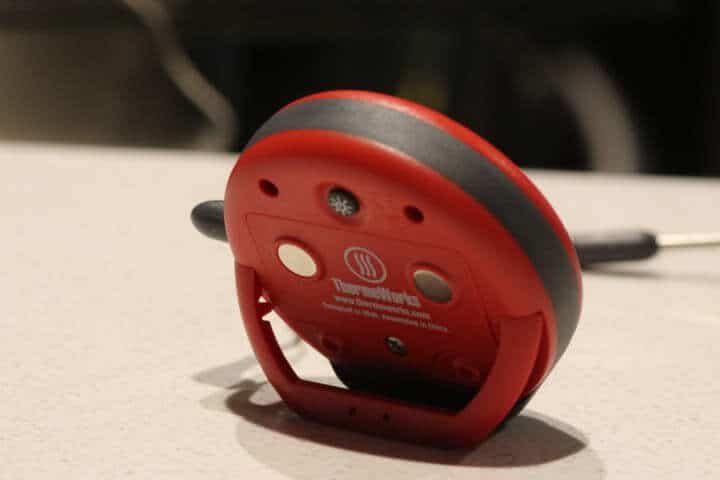 The back of the DOT revealing its fold-out stand.

The digits on the display are not only large (3/4 inch high) but a little thicker which makes them easier to see from a distance. (Like from your couch and you don’t want to get up.)

As I’ve probably mentioned too many times already, anyone can use the DOT right out of the box without an instruction manual.

You turn it on with the power button on the back and then use the arrow buttons to set your temperature alarm. Stick the DOT’s probe in whatever you’re monitoring and when it hits the target temperature it beeps.

Not too complicated. There is something to be said for not having to figure out buttons on a thermometer, especially if you’re entertaining a group of people during the holidays.

The DOT comes with a kickstand on the back that folds in and out as well as a magnet if you want to attach it to something.

The digits on the screen are big and easy to read. The screen stays illuminated for ten seconds after you press the light button. That is one area I wish were better on the DOT. The screen could be a little brighter but I’m sure this would drain the battery-life prematurely.

The battery life is 5000 hours, so you’ve got some time before you forget to add batteries to your shopping list yet again.

To test the accuracy of the Thermoworks DOT I prepared a sous vide water bath set to 140 degrees Fahrenheit. First I compared the DOT’s temperature readings to the Thermoworks Signals and the Thermapen MK4. 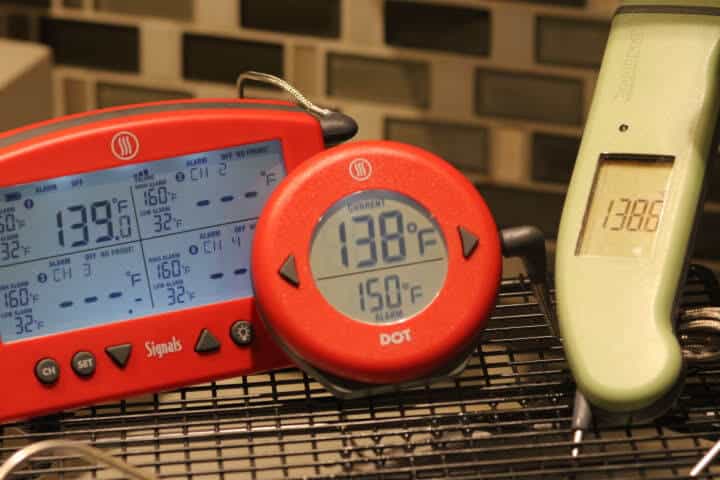 The Thermoworks Signals, the DOT, and the Thermapen MK4 in a sous vide waterbath.

As you can see the actual water temperature appears to be a little lower than 140 degrees but all three thermometers seem to be pretty close in their readings.

Next, I tested the DOT against another oven meat thermometer, the ThermoPro TP-17, as well as the Signals. The water temperature of the sous vide appears to have stabilized, as it is closer to 140 degrees. 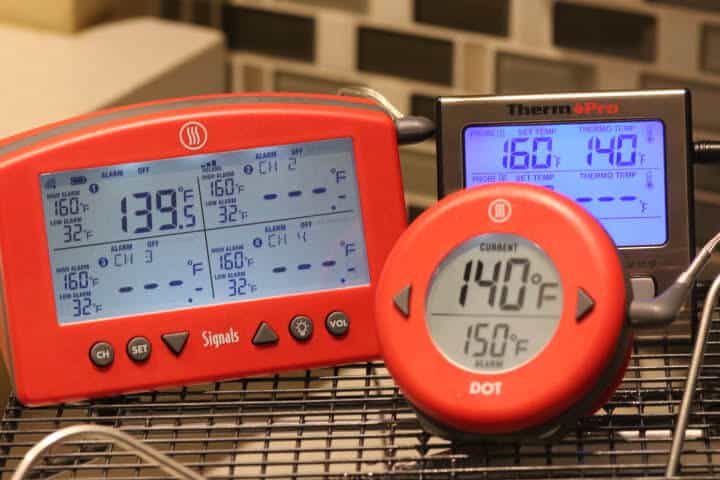 The Thermoworks DOT, Signals, and the ThermoPro TP-17 measuring a 140-degree water bath.

The body of the DOT is sturdy and intended for use in commercial kitchens as well for home use. It has an IP 65 rating with molded-in, splash-proof seals. The DOT is sturdy enough to survive most kitchen incidents save a dunking in water.

I would consider the DOT to be pretty durable.

Quality comes with a price. Thermoworks products are the best in the thermometer category and will stand the test of time better than other cheaper, basic housewares thermometers you will find.

With that being said, the DOT’s regular price is on the higher end for what you might see for an oven meat thermometer. However, that doesn’t mean that Thermoworks thermometers never go on sale, they do.

In fact, I was able to purchase the DOT for far less than its regular price. Subscribe to Thermoworks’ mailing list and you will see some deals popping up in your inbox eventually. 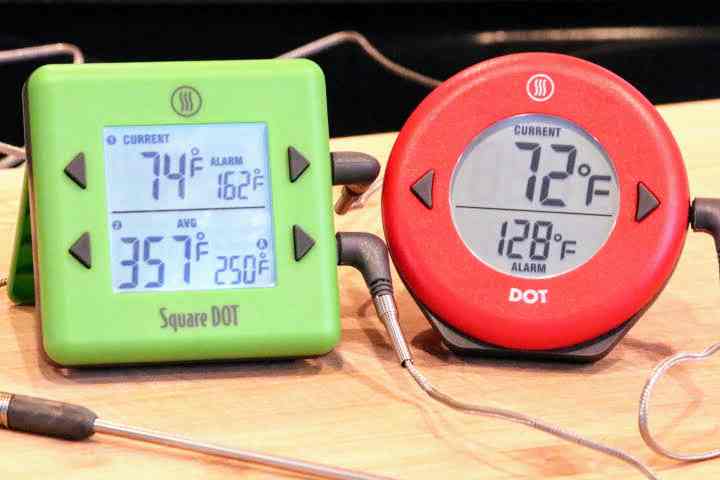 The backlight of the Square DOT is noticeably brighter than the DOT’s backlight.

The DOT and the Square DOT have the same probe temperature measuring range and accuracy specifications, but there are a few key differences between the two thermometers.

Here are the most important differences: 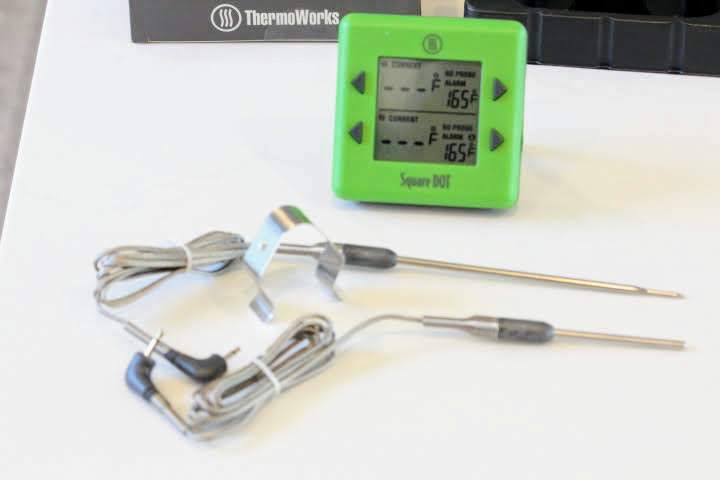 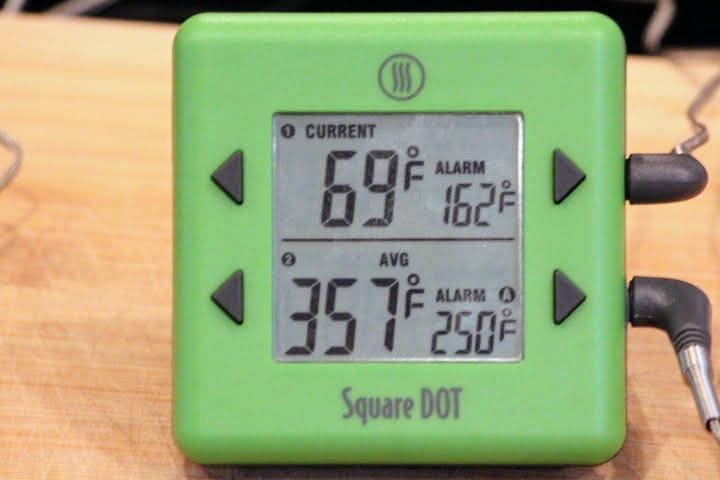 If you’ve been reading the review up to this point you know there are many.

The DOT does one thing extremely well, measuring the temperature of one item of food until it hits your target temperature. There are no bells and whistles with it.

However, the DOT is the lowest-priced entry point that will open up an array of Thermoworks probe attachments.

The arrival of the dual-probe Thermoworks Square DOT thermometer makes things interesting and it will definitely attract more than a few potential customers away from the DOT.

I still think the DOT represents a great value at its lower price point.

The ability to use different Thermoworks probes increases its functionality and usefulness. So, if you’re a home-brewer, sous vide aficionado or do a lot of frying, then I would definitely recommend the DOT due to its versatility.