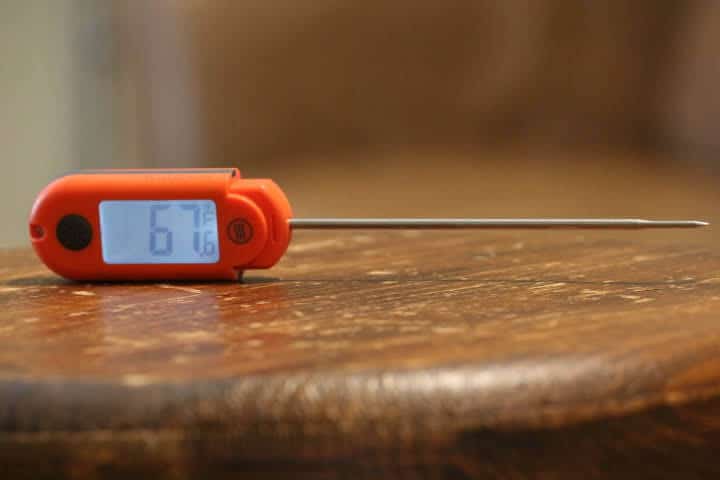 Thermoworks has just released the DASH Super-Fast Instant-Read Thermometer. At first glance, it looks similar to the Thermoworks ThermoPop except for the shape of the body.

So, is it just a different version of the ThermoPop? No, it’s not.

Although they do share similarities, the new DASH thermometer by Thermoworks is more accurate and has more features than the ThermoPop.

Coming in at a price point just a smidge above the ThermoPop, the DASH more than makes up for it in value. 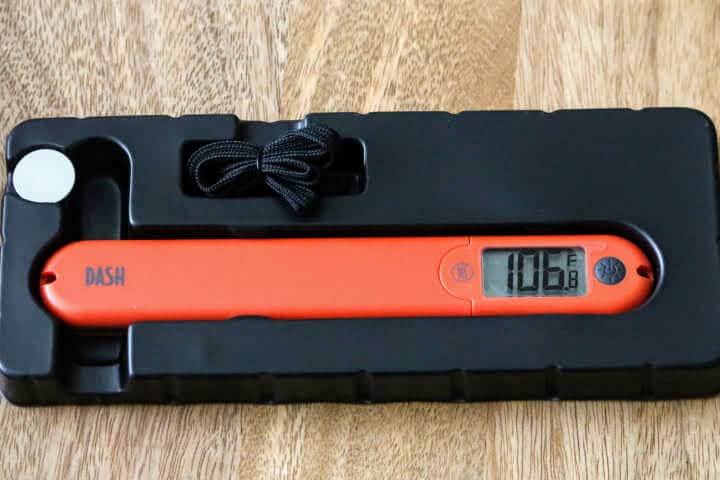 And that is just one of the features of the DASH. I will tell you about the rest in this review of the DASH Super-Fast Instant-Read Thermometer by Thermoworks. 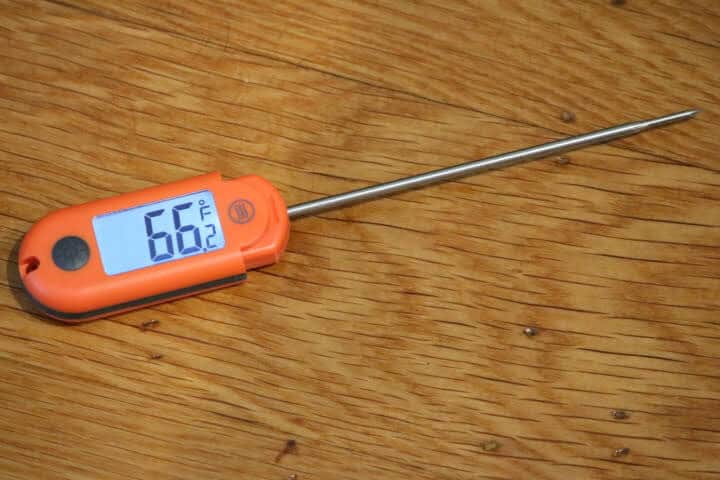 The DASH instant-read meat thermometer comes in two sizes, the DASH, and the DASH mini.

The DASH has a 4.5-inch long probe while the DASH mini has a 2.8-inch long probe. A smaller probe length is ideal for foodservice as it can easily fit in an apron pocket.

An important thing to note is that the DASH is made by Thermoworks, widely considered the top maker of meat thermometers on the market today.

Thermoworks, along with their partners in the U.K., ETI, also makes the top-selling meat thermometers, the Thermapen MK4 and the Classic Super-Fast Thermapen. So, yeah, they know quality. 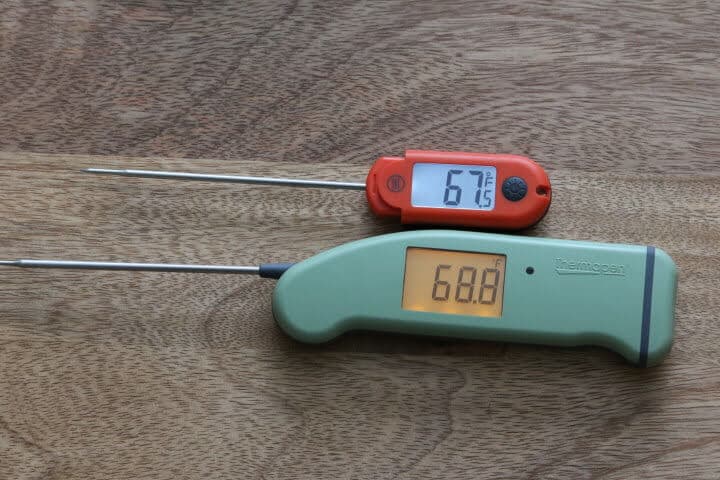 The DASH alongside the Thermapen MK4.

As I already mentioned, the DASH appears similar to another thermometer by Thermoworks, the ThermoPop.

However, the DASH has a lot of nice features that are an upgrade from the ThermoPop.

The DASH alongside the Thermoworks ThermoPop.

What are these features? Let’s take a look.

Features of the DASH

What does this mean? The National Institute of Standards and Technology (NIST) has an assurance program that certifies that a manufacturer is equipped to calibrate products to their standards. The DASH comes with a certificate that states it meets the NIST standards. 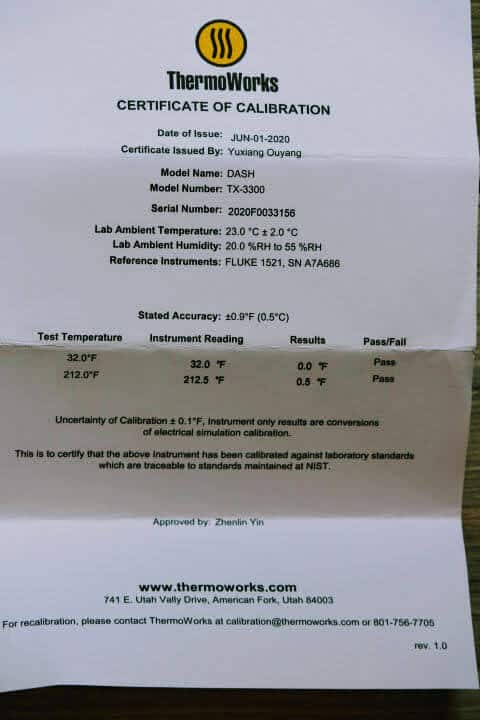 The Calibration Certificate for the DASH thermometer.

There are a lot of $200 thermometers that don’t come with this level of certification.

The DASH is a thermistor-type meat thermometer equipped with Thermoworks patented Super-Fast technology.

The display of the DASH rotates on its own without any button-pushing. This is great if you’re left-handed or need to come at food from another angle. 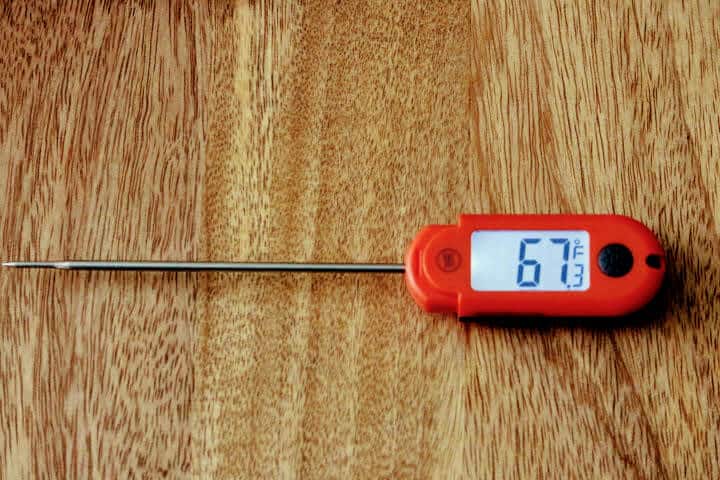 The response time is the same as the Thermopop but a tad more accurate.

The DASH is built for use in commercial kitchens and anything a home cook could throw at it. It’s built with rubber gaskets that will keep water out. An IP rating of 67 is about as high as you’ll see on a meat thermometer. (The Thermapen MK4 also has an IP67 rating.)

The backlight comes on when the thermometer is turned on. It will stay on for 10 seconds. The important thing to note is that the light is bright and the digits are large and easy to read. 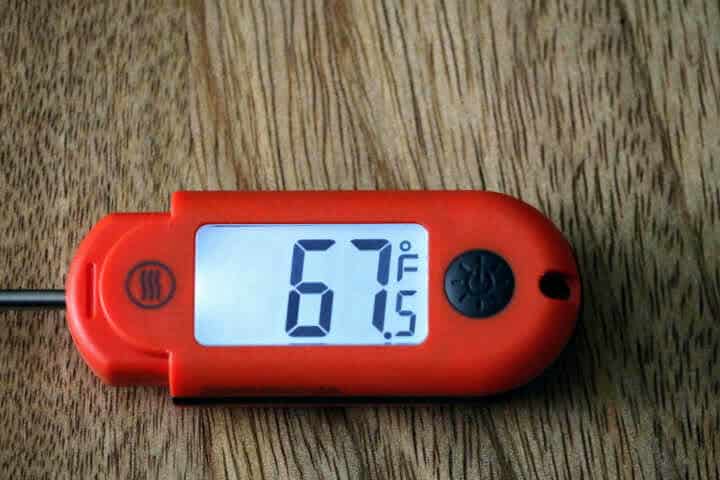 The backlight is nice and bright.

The DASH takes a 3V lithium coin cell battery with an expected battery life of 5,000 hours.

The probe is the same size and diameter as the ThermoPop. The diameter of the probe is .12 inches and reduces down to .08 inches at the tip. 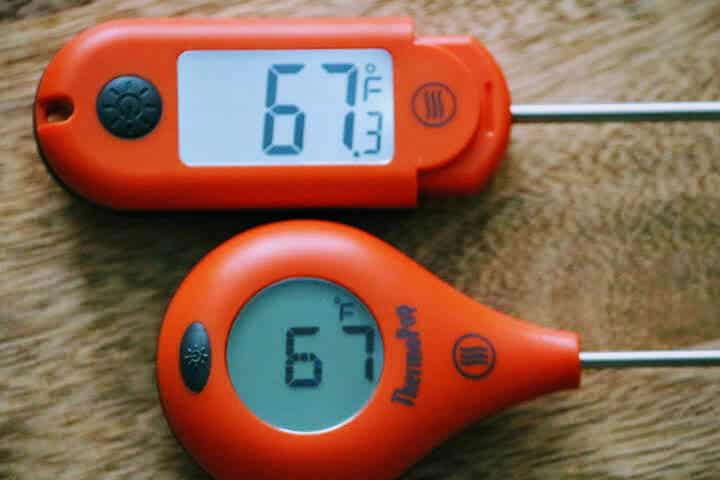 DASH vs ThermoPop: Similarities and Differences

I alluded to the DASH being similar to the ThermoPop earlier. They have the same probe size with the same response time of 3 to 4 seconds. They also have the same temperature measuring range of -58 to 572 degrees Fahrenheit.

Now here are the major differences between the DASH and the ThermoPop:

If you move the DASH to your opposite hand the screen will rotate 180 degrees automatically. The ThermoPop can rotate all the way around 360 degrees but you have to press a button on the back.

For me, this is a big upgrade over the ThermoPop as the digits and the backlight are more visible in low-light situations with the DASH. You can’t even tell when the ThermoPop’s backlight is on.

Both IP ratings are pretty solid with the DASH being a little more waterproof.

As of this writing, the ThermoPop retails for $34 to the DASH’s list price of $39. 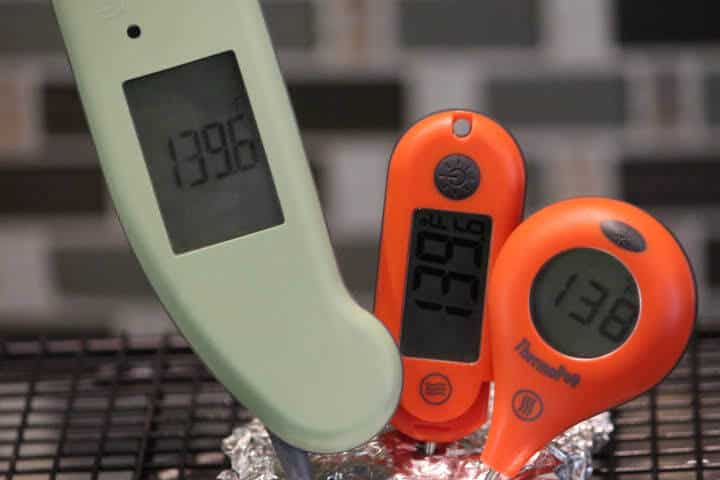 DASH vs the Thermapen MK4

Whenever Thermoworks comes out with a new instant-read thermometer the invariable question of how it compares to the Thermapen arises. And the answer will always be; they are not in the same class.

Although the DASH is a step up from the ThermoPop it still isn’t in the same category as the Thermapen MK4. 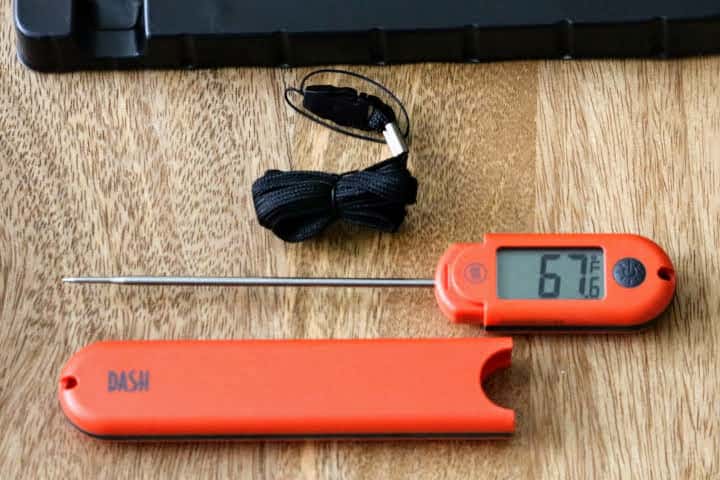 The cover of the DASH for when it’s not in use.

Instead of picking on the other thermometers from Thermoworks, how does the DASH compare to other meat thermometers on the market?

For this comparison, I chose the Lavatools Javelin PRO Duo. The Javelin PRO Duo is one of the better meat thermometers on the market that doesn’t come from Thermoworks.

The Javelin PRO Duo is also very accurate for a thermistor-type thermometer. In my tests, it actually was a tad more accurate than the ThermoPop. But the DASH is a different story, it is just as accurate if not more than the PRO Duo. 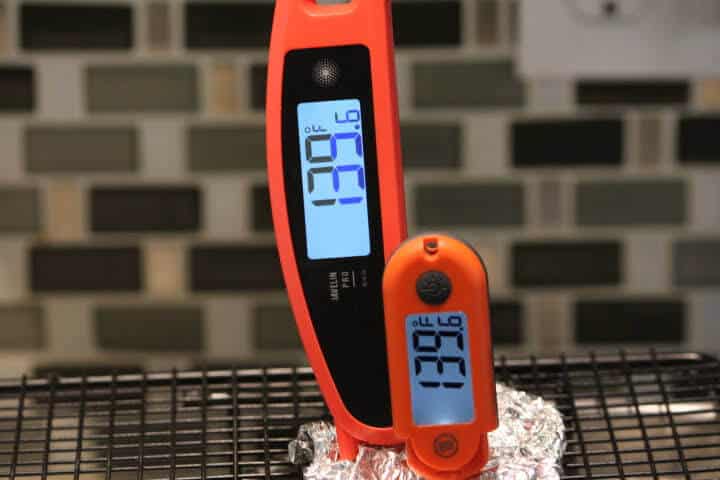 The DASH is also rated IP67 to the PRO Duo’s IP65 rating. I think the DASH is a better value for your money at a considerably lower price tag.

It’s pretty apparent that the DASH is going to lure away quite a few customers from the ThermoPop. While the ThermoPop is still a great thermometer, I think the DASH may have surpassed it in terms of value for the money.

It has a larger display with a better backlight as well as a hands-free rotating screen. Couple this with more accuracy in a little more waterproof body and I think the DASH is the winner here.

I would say all of those upgraded features are worth a few more dollars than the ThermoPop.

I also think the DASH is a better value for your money than the Lavatools Javelin PRO Duo, which at the time of this review was $16 more.

You’re not going to find a better instant-read meat thermometer under $40.