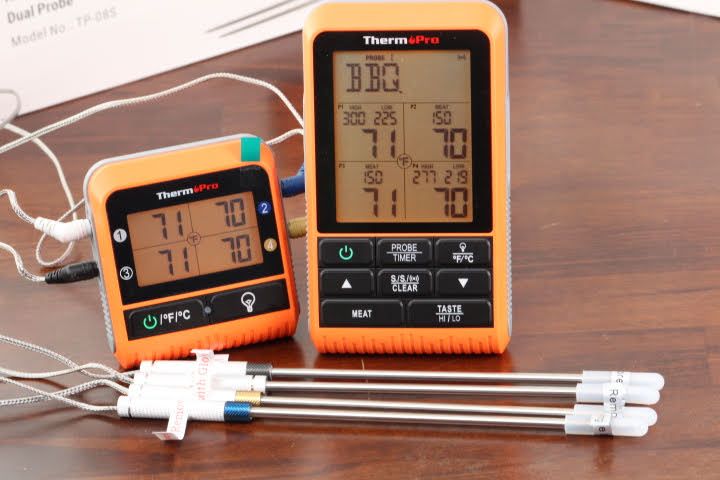 The ThermoPro TP829 Remote Meat Thermometer boasts of a 1000 foot wireless signal range between its transmitter and receiver units.

That is an incredibly long distance and puts the TP829 only behind the Thermoworks Smoke X4 in terms of wireless signal range. I tested the signal strength and it is legit, see the usability section below. 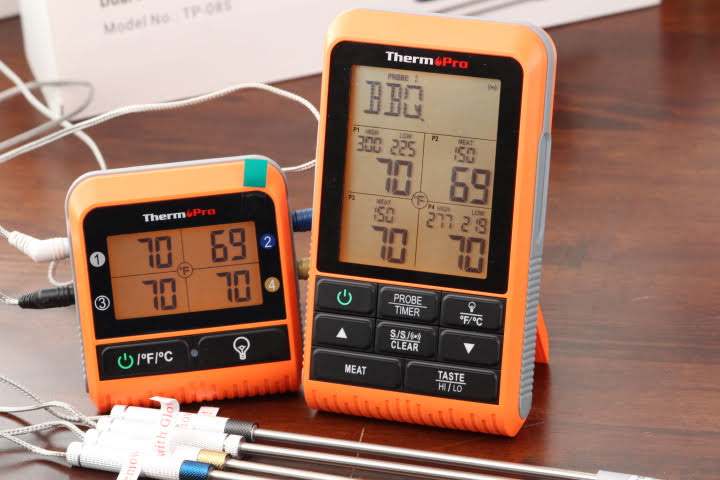 However, the wireless signal range is just one aspect of a remote wireless meat thermometer and it often overshadows its other features.

The usability, durability, accuracy, and price relative to similar thermometers are the features that determine any thermometer’s value.

How does the TP829 stack up in the world of remote meat thermometers?

In this review of the ThermoPro TP829 Remote Wireless Meat Thermometer, I will examine all of its important features as well as how it compares to the other remote wireless meat thermometers on the market. 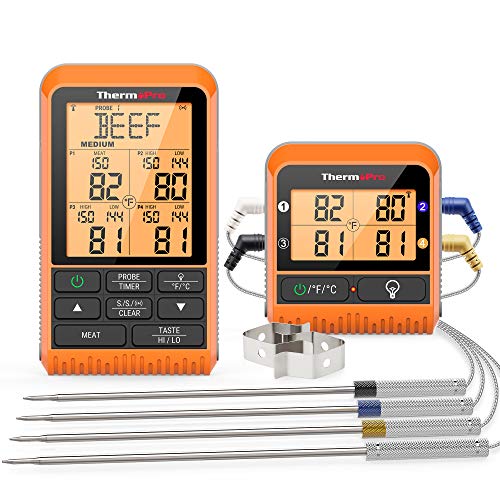 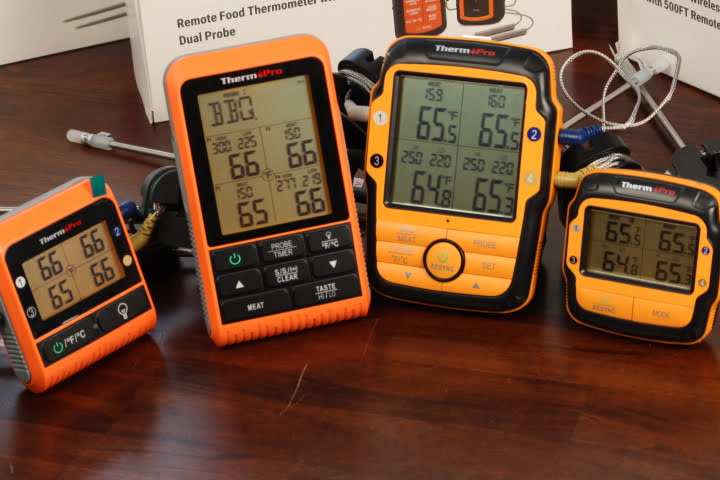 Here are the similarities between TP829 and the TP27: 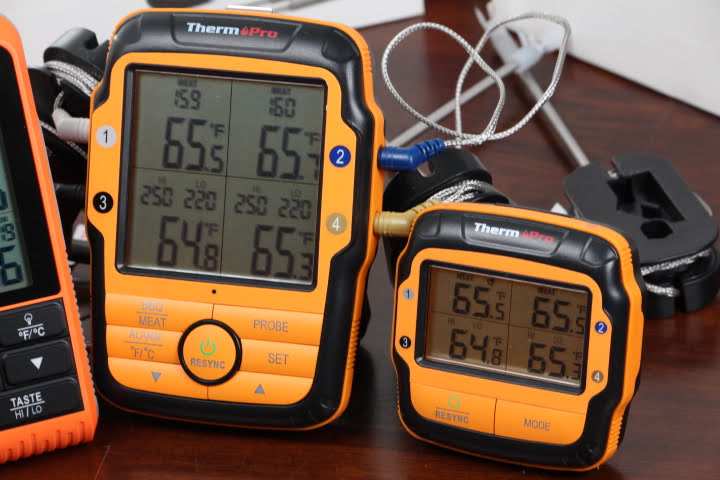 I’m not sure if the price point of the TP829 is settled yet considering I’m writing this the day after its release, but as of right now this thermometer presents a tremendous value.

Let’s look at the features of the TP829.

New and Old Design Features of the ThermoPro TP829

The ThermoPro TP829 represents both the new and the classic features of ThermoPro thermometers.

What does this mean?

While the TP829 has many newer advanced features such as the extended wireless range, IPX4 waterproofing, and color-coordinated probes, it retains a similar button interface and transmitter and receiver functionality of prior models. 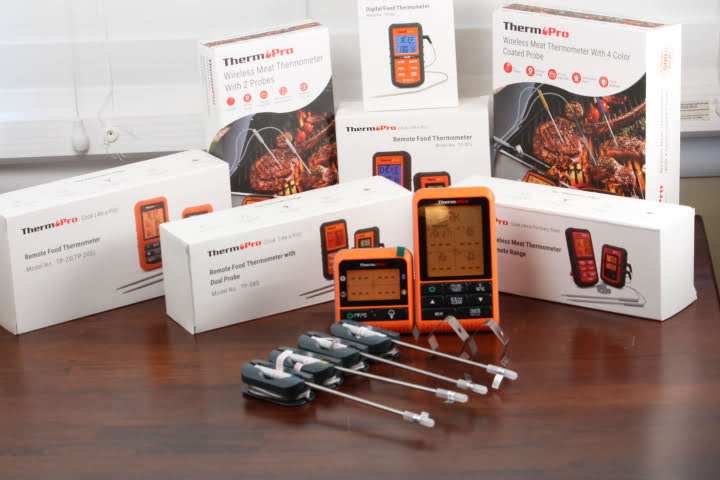 The ThermoPro TP829 Remote Meat Thermometer with all of the other remote meat thermometers in ThermoPro’s lineup.

It also brought back the preset meat temperature alert options from prior models. The newer TP27 ad TP28 did away with this option.

This isn’t a bad thing. If it works, it works.

It appeared that ThermoPro was transitioning their lineup of remote meat thermometers to have the larger of the two units become the transmitter.

This larger unit can also function as a standalone thermometer so that you don’t necessarily need a receiver as well.

It also made the smaller receiver easier to carry around.

Their recently released TP27 and TP28 remote models are designed this way.

ThermoPro switched it back for the TP829 model.

If you prefer to carry a smaller receiver around to monitor your food on the grill then the TP27 and TP28 models are for you. 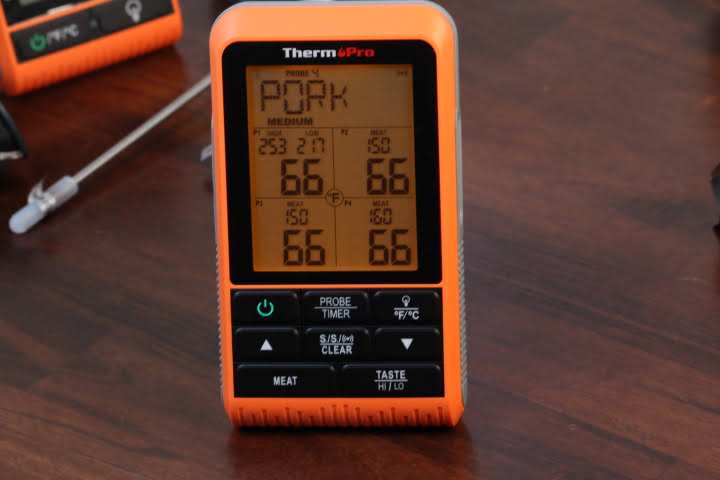 Here are the important features of the ThermoPro TP829. 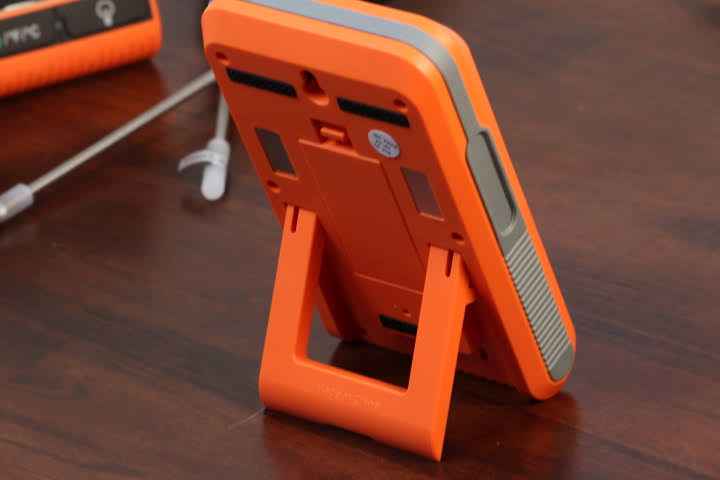 Here are the receiver buttons and their functions.

Press to turn on and off. Press and hold for 3 seconds to enter the synchronization process with transmitter.

Rotate between the four different probes. Press and hold for 3 seconds to enter the Timer mode.

Press to turn on and off the backlight. Press for 3 seconds to switch between Fahrenheit and Celsius.

Increases and decreases temperature settings as well as time.

Turns the alarm on and off in thermometer mode. Confirms the timer settings by pressing once. When the timer is set press once to start the timer. Press once to pause the timer. Hold down for 3 seconds to clear the timer.

In thermometer mode, press to select the type of meat and its preset temperature settings. 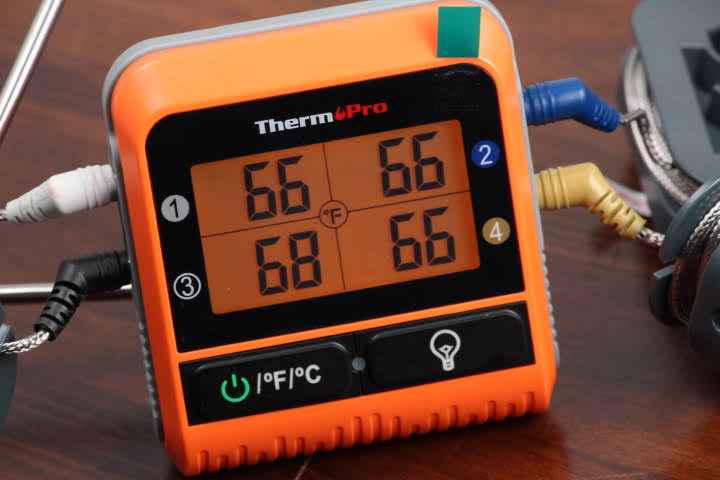 Here are the features of the ThermoPro TP829 transmitter: 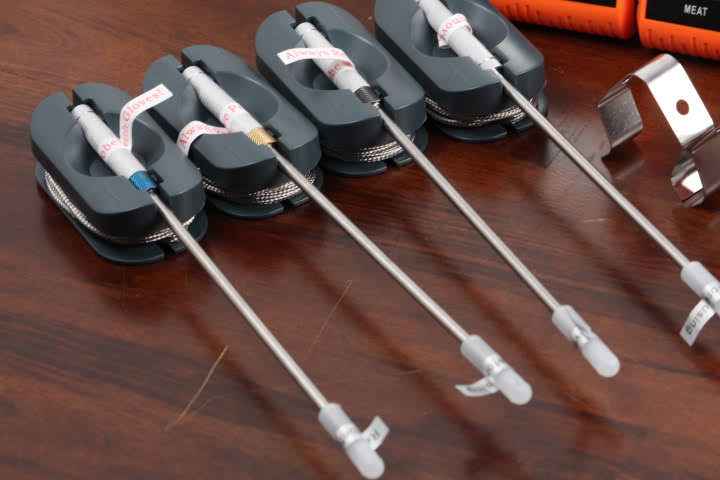 There are only two buttons on the transmitter, a power/ Fahrenheit/Celsius button and a backlight button.

With all of the control functions located on the receiver that you carry with you, how is the usability of the TP829?

Usability of the ThermoPro TP829

How easy is the ThermoPro TP829 to use? I think that most people should have a decent grasp of its functioning after a few uses.

It’s relatively easy to use.

There are a few “user experience” aspects that you will either love or leave. One of them being the preset meat temperature option.

This is handy for some people that are unfamiliar with the proper serving temperatures for different meats but I still think the preset temperatures are off by quite a bit.

This isn’t a huge deal as the TP829 also offers a self-programmed temperature option.

Another design feature is the choice to move all of the thermometer’s control functions back into the receiver.

If you had a choice of carrying around one of the two units that come with the TP829, which one would you choose?

The larger receiver is similar in size to a cellphone so it’s not that large. But the smaller pager-style receiver of the TP27 and TP28 thermometers does have its merits.

It’s now time to discuss the most publicized feature of this thermometer, its purported 1000 foot wireless signal range. 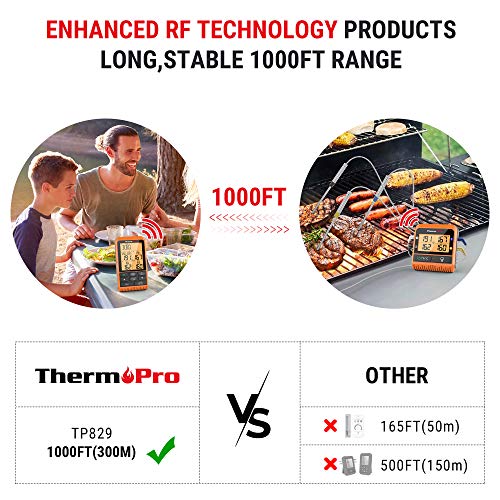 The advertised distances are always a best-case, no obstacles, line-of-sight measurement between the transmitter and receiver.

I always test the signal distance by taking a walk around my neighborhood.

I live in a hilly neighborhood with plenty of houses and even more trees.

With all of that in the way between the TP829’s transmitter and receiver, I was able to go 880 feet (according to Google maps) before the signal cut out.

Is this a real-world grilling scenario? No. Unless you like to go on walks while you’re grilling.

The marketed wireless signal distance is symbolic of the thermometer’s signal strength.

There are plenty of remote thermometers that will lose signal between transmitter and receiver even by putting a few walls of your house in between.

The main takeaway, the TP829 won’t do this. I can see why they included the signal range in the title on the box. 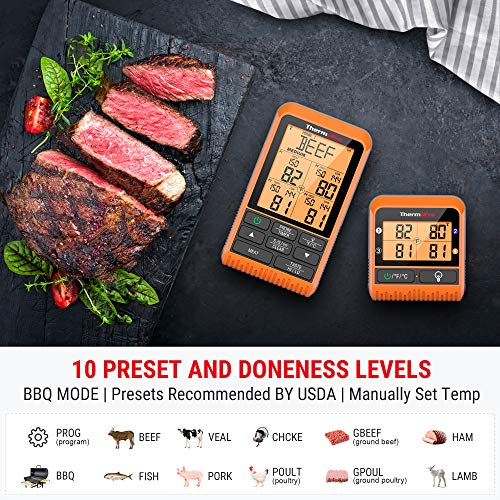 The Durability of the TP829

How durable is the TP829? Durability is tested over time and many cooks so it would be premature to give any indication of how durable it is.

It does have at least a semblance of waterproofing with an IPX4 rating. The main question for any barbecue thermometer is will it hold up in the rain?

I think it would survive a brief rain shower but I’m not sure about leaving it out overnight in the rain.

The temperature probes are standard issue ThermoPro and are 8.5″ long with 42″ long cords.

The ThermoPro TP829 is very accurate. I tested it against a highly accurate thermometer with probes measuring the temperature of water heating on the stove. 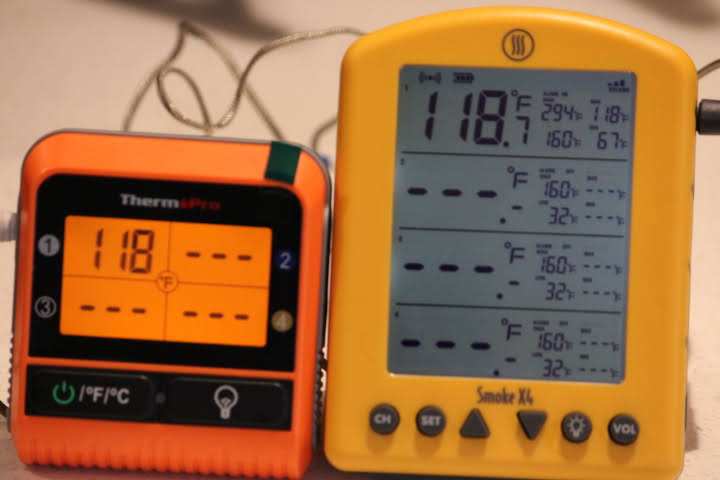 The ThermoPro TP829 and the Thermoworks Smoke X4 both measuring 118 degrees Fahrenheit.

The TP829 produced similar readings as the other thermometer with a little lag time in terms of responsiveness to temperature changes.

I don’t think the price point is set firmly yet for this thermometer. Right now the price is a steal and I highly recommend getting it before the price most assuredly goes higher.

It has pretty much the same features as the TP27 which is twice the price, and it has twice the wireless signal range.

I’ll update this section a little later once it’s been on the market for a while.

October 2022 Update: The TP829 continues to prove a great value at its current price and I stand by my original price assessment.

With four, color-coordinated probes and a strong, 1000 foot wireless signal range, it presents a tremendous value at its current price point.

Will this change? We will see.

It is currently half the price of the highly-rated TP27 model, with double the wireless signal range.

If you’re looking for a remote meat thermometer for your grill, this is probably the easiest purchasing decision that you’ll come across.

Things could change and the price might go up, but I think the TP829 is a great value even at a possibly much higher price.