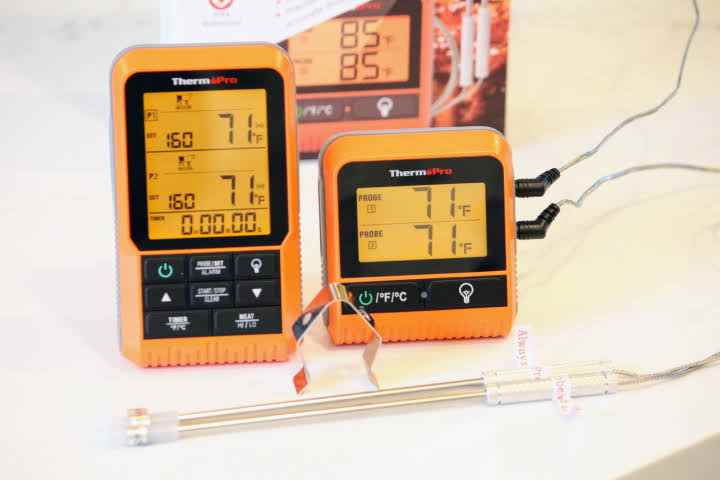 The ThermoPro TP826 Wireless Meat Thermometer is a dual-probe meat thermometer that can transmit cooking temperatures up to 500 feet between its transmitter and receiver units. 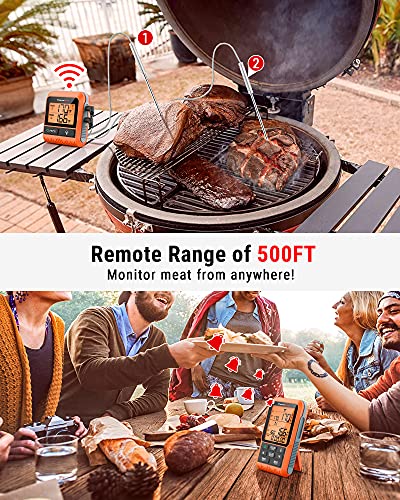 This strong signal transmission is capable of penetrating many obstacles such as walls, trees, buildings, making it an ideal remote meat thermometer for monitoring your smoker or grill outside.

The ThermoPro TP826 comes with two, extra-long, stainless steel probes that are perfect for larger roasts and turkeys. 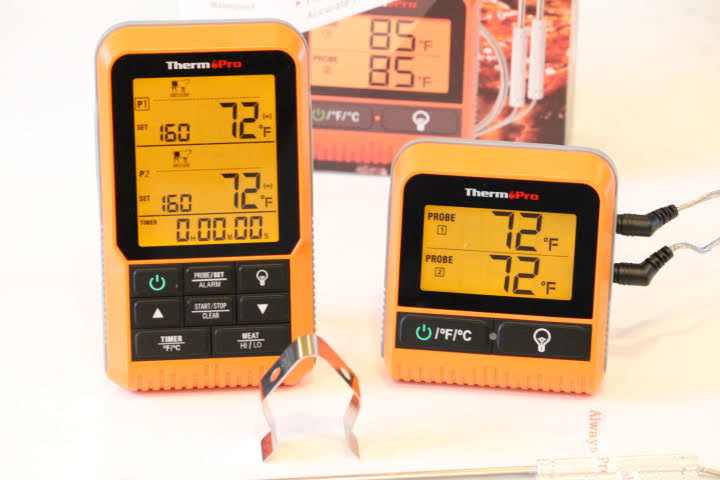 If you do a lot of smoking you can also use one of the probes to track the ambient chamber temperature of your smoker while monitoring your meat with the other probe.

It’s also rated IPX4 waterproof, meaning it can handle a little rain and be okay.

The TP826 is basically the two-probe version of ThermoPro TP829 which has four probes.

Since both thermometers’ wireless signals are robust enough to transmit through most home obstacles you throw at them, the wireless range discrepancy is irrelevant.

Unless you’re a football coach and you’re monitoring your brisket from 3 practice fields away.

In this review of the ThermoPro TP826 wireless meat thermometer, I will examine its features, usability, durability, accuracy, and price to see if it’s a meat thermometer worth your time and money. 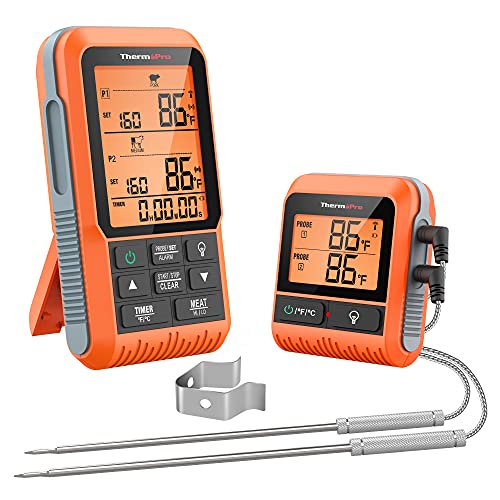 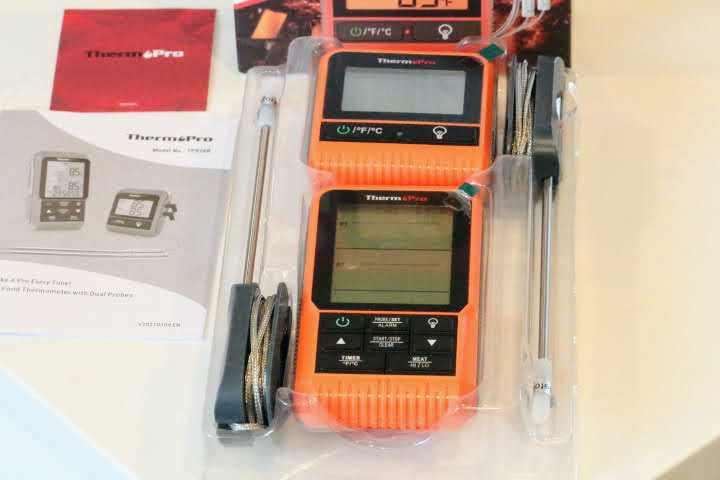 If you’re unfamiliar with the ThermoPro company, they are a manufacturer of many highly-rated meat thermometers and other temperature measuring devices.

They make quality, accurate meat thermometers and they stand by their products.

I own most of their lineup of meat thermometers and I can attest to their quality. 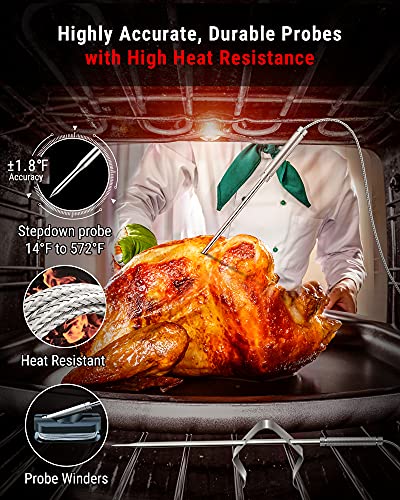 I’ve only had one issue with one of their thermometers, the TP829 coincidentally. It had a problem where it would shut off after 2 hours of operation, even while in use.

This was a defect that the company rectified as soon as it was discovered. After contacting customer service they sent me a replacement, free of charge.

ThermoPro has around 13 different wireless remote meat thermometer models, so what sets the TP829 apart from the others? Great question.

Let’s examine what the TP826 remote wireless meat thermometer brings to the table in terms of features and specifications.

Features of the ThermoPro TP826

Here are all of the important components and features of the ThermoPro TP826. 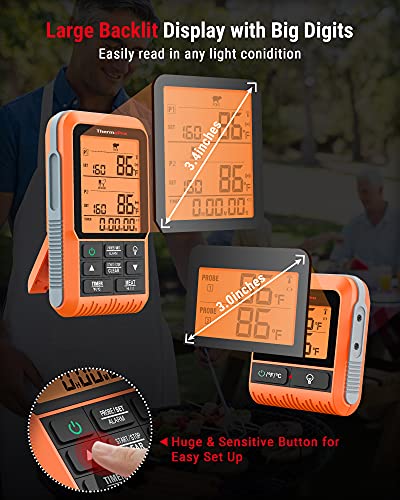 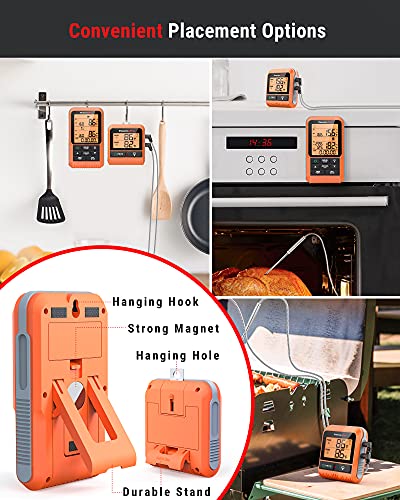 Usability of the TP826

The ThermoPro TP826 is relatively easy to use.

The buttons on the front of the ThermoPro TP826 Wireless Receiver.

You should be able to use it proficiently after a quick perusal of the operation manual.

Here’s a link to the operation manual for the ThermoPro TP826.

The buttons are laid out logically on both the receiver and transmitter units. 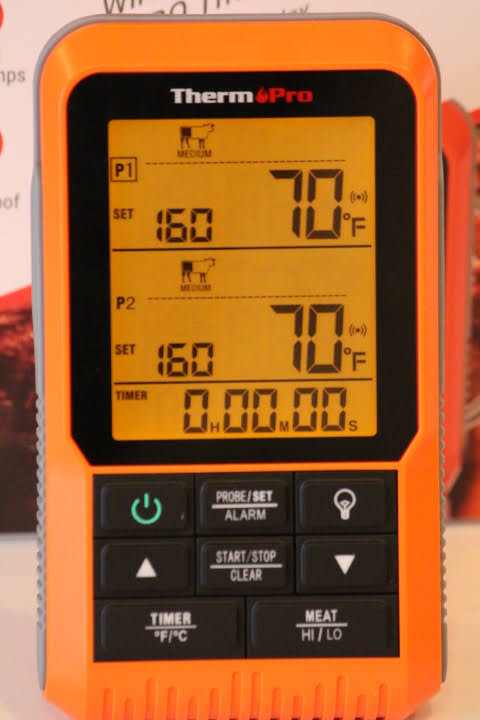 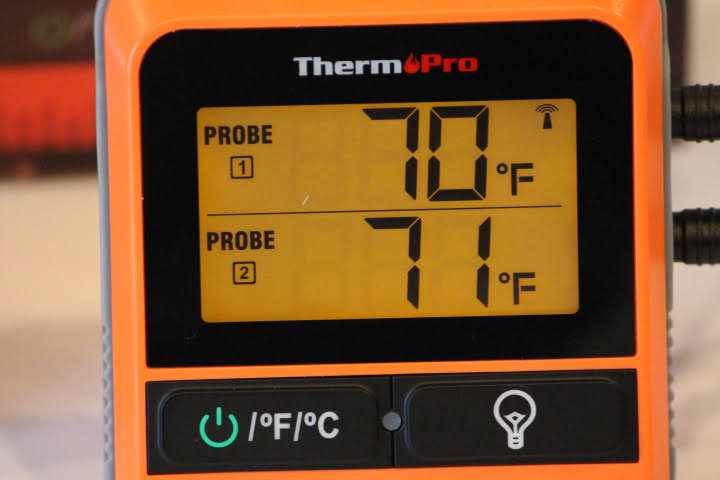 The transmitter of the ThermoPro TP826.

The backlit display for both the receiver and transmitter units is nice and bright, although it will only stay illuminated for 10 seconds when the light button is pressed.

Another hallmark of all of ThermoPro’s wireless thermometers is their extraordinarily-long temperature probes. 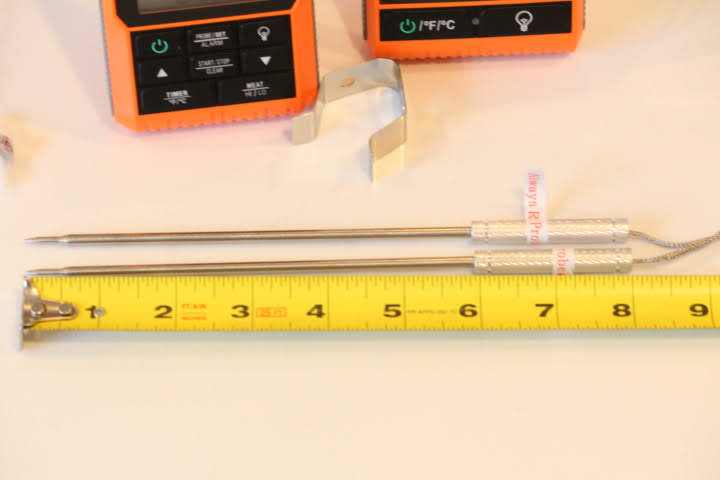 At a length of eight inches, these long temperature probes can make it to the deepest part of a 25 lb turkey.

Although not ideal for smaller cuts of meat, the length of these probes really comes in handy when cooking large roasts and birds during the holidays.

The ThermoPro TP826 claims to have a wireless signal range of 500-feet between its transmitter and receiver units.

This is a line-of-sight measurement with no obstructions in between such as walls and trees.

I decided to test this signal range by going on a walk in my neighborhood.

I also brought along the four-probe ThermoPro TP829 that has a reported wireless signal range of 1000 feet. 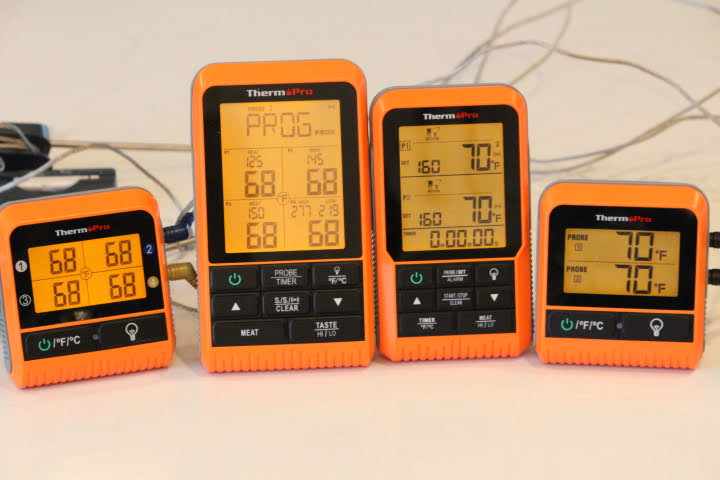 Leaving both models’ transmitters in my kitchen, I walked up the sidewalk until I lost signals for both.

Considering the signal had to travel through a few walls of my house and some trees, this is a pretty strong signal.

The wireless signal of both units is incredibly strong with both of them capable of transmitting through multiple obstacles.

My takeaway from this test is that for just $10 more, you can get two extra probes and a stronger wireless signal with the ThermoPro TP829. 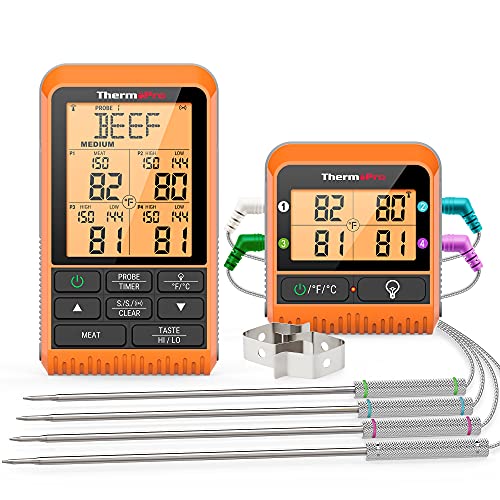 There are two aspects of the TP826 that I consider favorably when rating its durability.

It has a waterproof IP rating of IPX4. See here for an explanation of IP ratings.

An IP water rating of 4 means that a device can withstand splashing water with no harmful effects.

Does this mean that you can leave the TP826 outside in a rainstorm? Probably not, but it should be able to handle some rain.

The durability of the TP826 is also backed by ThermoPro’s amazing customer service and warranty.

They have a standard one-year warranty that goes up to three years if you register your thermometer with them.

As I said before, they stand by their products.

To test its accuracy, I inserted both of its probes into a glass of hot water alongside the Thermapen ONE and the Lavatools Javelin PRO Duo. 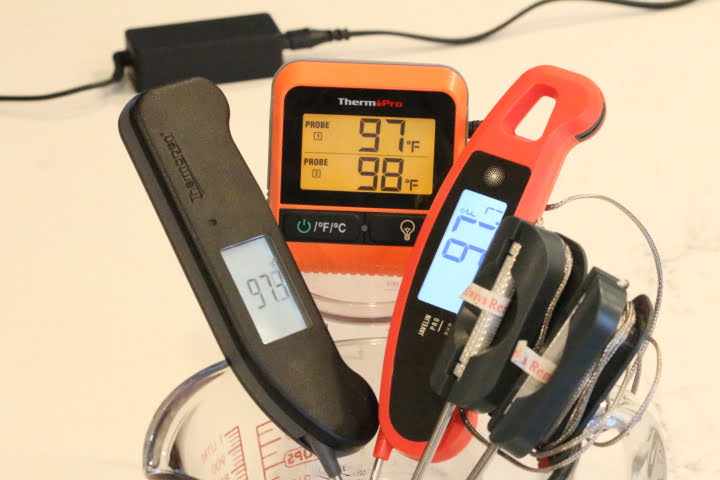 The Thermapen ONE, ThermoPro TP826, and Lavatools Javelin PRO Duo.

The TP826 measured around the same temperature as the other two thermometers, albeit not as fast.

I would consider the TP826 as accurate.

For some people, two probes are more than enough. I like the flexibility of the four probes.

Both are solid remote meat thermometers, so what you choose will depend on the number of items you generally grill or smoke at one time.

However, I think that its sibling, the four-probe ThermoPro TP829 makes a more compelling purchase due to its two extra probes and extended wireless range. 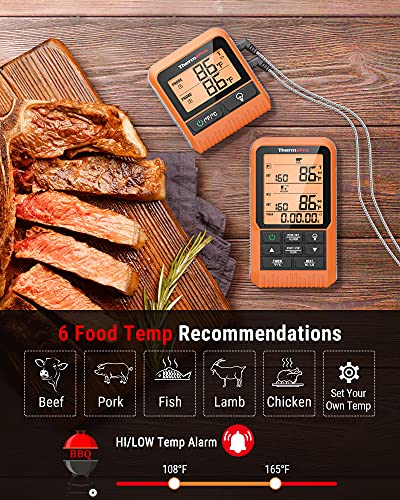 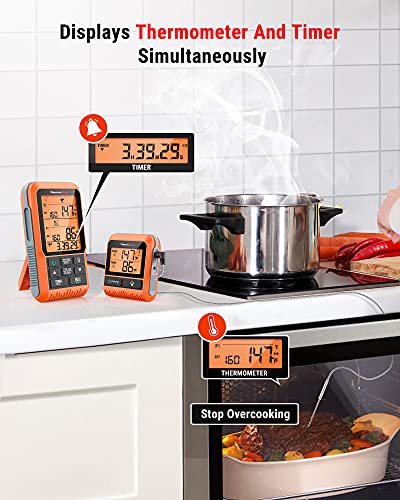