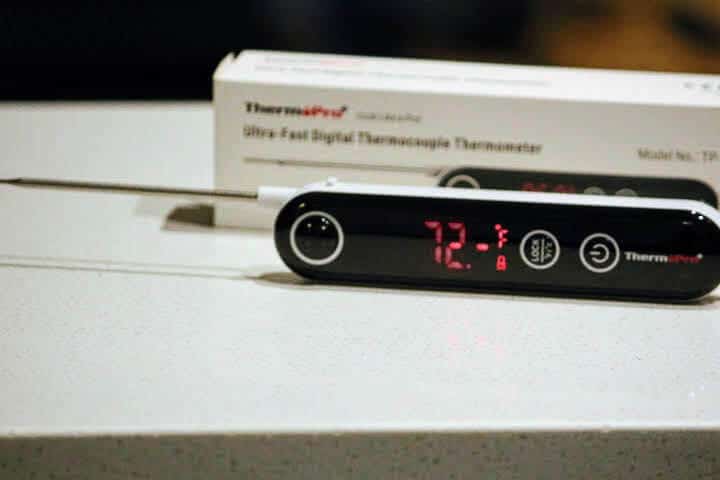 There are a lot of things to like about the ThermoPro TP18 Meat Thermometer. A thermocouple-type meat thermometer, it is fast and accurate with temperature readings in 2 to 3 seconds.

It has a bright, red digit LED display that is easily visible in the dark. It even comes with a calibration function should it ever need it.

However, the thermometer body isn’t the sturdiest, with a hollow plastic feel to it. If the TP18 was housed in an upgraded shell similar to what the ThermoPro TP03 model now has (the TP03H), it would be considered a tremendous value for the price.

As it stands right now, it is a fast and accurate meat thermometer in need of a more durable body. If you are gentle with your kitchen gadgets then the TP18 is a great value for its current price tag. 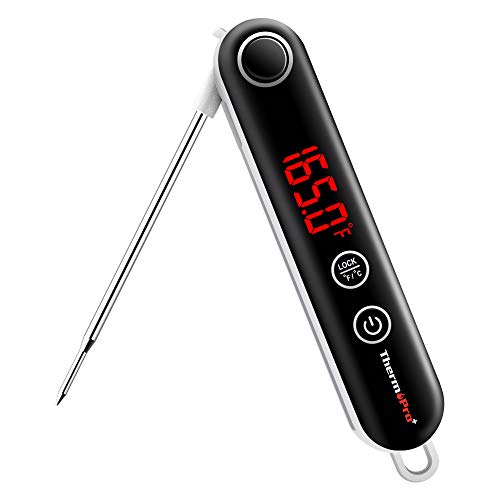 The ThermoPro TP18 Ultra-Fast Thermocouple Meat Thermometer is just one of the many models in the ThermoPro lineup of meat thermometers.

ThermoPro is a company that is very engaged with its customer base and provides great customer service. They listen to what their customers are saying and that helps inform their thermometer design decisions.

The most recent meat thermometer releases by the company are undoubtedly influenced by this customer interaction. The newer meat thermometers have more durable, waterproof-rated bodies than their predecessors. 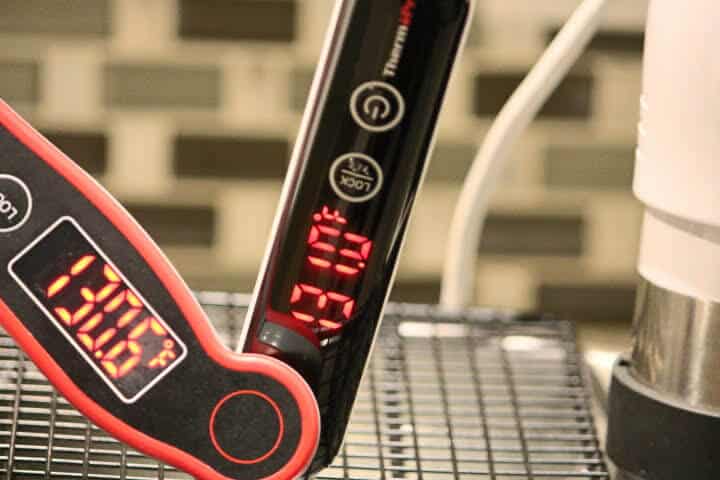 The ThermoPro TP19 is a great example of the company’s continuing innovation and is the best meat thermometer you’ll find under $30.

The ThermoPro TP18 is an older model and while fast and accurate, could use an updated body like some of its mates.

That’s not to say it doesn’t bring a lot to the table, it does. Let’s take a look at what the TP18 features.

Here are the important features of the ThermoPro TP18 Meat Thermometer: 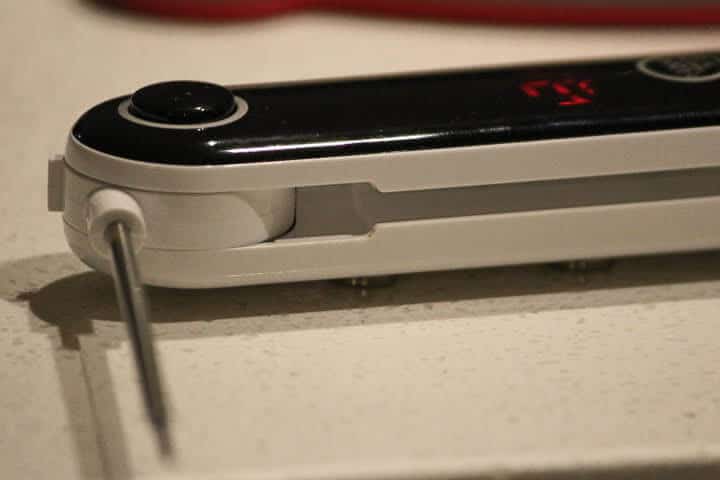 By pressing the automatic release button, the probe of the TP18 will pop out. 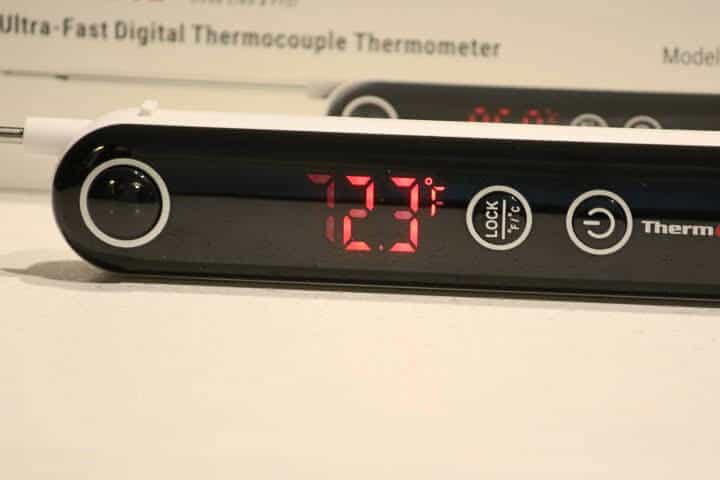 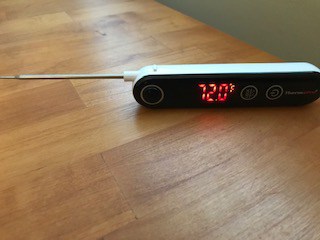 The ThermoPro TP18 is pretty easy to use, with only two buttons on the thermometer. There is a power button and a multi-use button labeled Lock/F/C.

This button allows you to lock in a temperature for 5 seconds as well as switch between Fahrenheit and Celsius readings. To enable the lock function, just press the button once.

To switch between Celsius and Fahrenheit hold the button down for seconds.

Would I put the TP18 in the same class as another thermocouple thermometer such as the Thermapen by Thermoworks? Of course not.

But I would rank it higher than a lot of the random “housewares” type meat thermometers in the $15 to $20 price range. 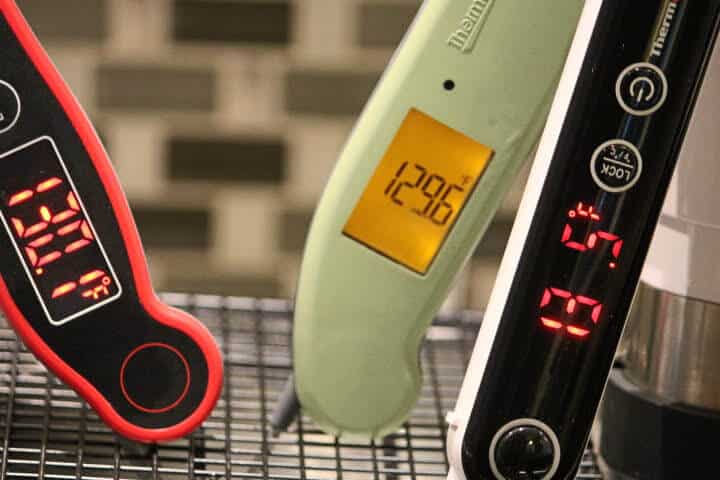 My initial reaction after opening the box to the ThermoPro TP18 meat thermometer is that the thermometer body doesn’t seem too sturdy.

The body is light for its size, giving it a hollow feel. When you compare it to its brother, the TP19, you really get a sense of how hollow the body is. The TP18 and TP19 are about the same weight, but the TP19 has a more compact body with a more durable polymer body. 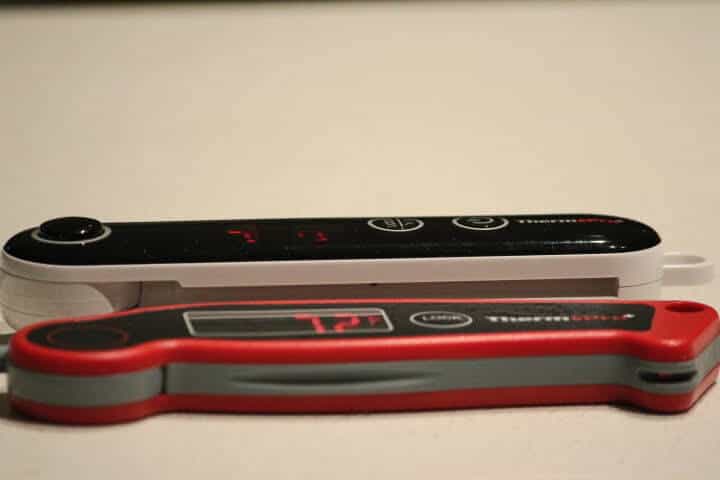 The ThermoPro TP19 thermometer (in the front) has a more compact and durable body than the TP18. (in the back)

The TP18 has no waterproof rating while the TP19 is rated IP65 waterproof, meaning that it can get wet and will withstand an occasional dunking in water.

The TP18 is an older thermometer model in ThermoPro’s lineup of meat thermometers. ThermoPro is constantly tweaking the usability and functionality of their thermometers and updating models.

The original version of the TP18 had buttons that were underneath the plastic body of the thermometer, almost akin to a touchscreen. This proved troublesome and now there are buttons that aren’t integrated into the body that can be pressed down.

They do listen to their customers, which is one of the hallmarks of a great company. 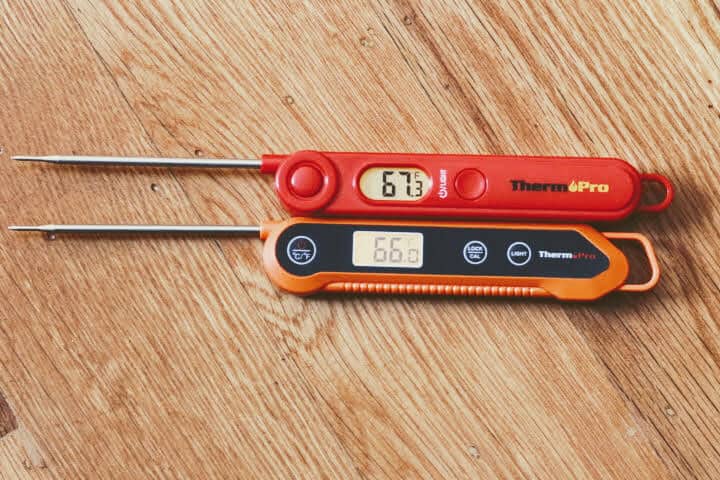 The original TP03A model on top, the newer TP03H model on the bottom.

The ThermoPro TP18 is a good meat thermometer, but the plastic body could use an upgrade to something sturdier. Also getting rid of the automatic release button would help as well.

Of course, then we are talking about a higher price point than its current price tag.

Which leads me to the actual price of the ThermoPro TP18.

Issues with the body aside, you will be hard-pressed to find a faster, more accurate meat thermometer in this price range.

If you are gentle with your kitchen tools then the TP18 would be a good value for you. It’s not waterproof and a little less accurate than its more advanced brother, the TP19.

If $20 is your budget then the TP18 is a solid choice. I am currently ranking it higher than the similarly-priced Kizen and Alpha Griller meat thermometers. 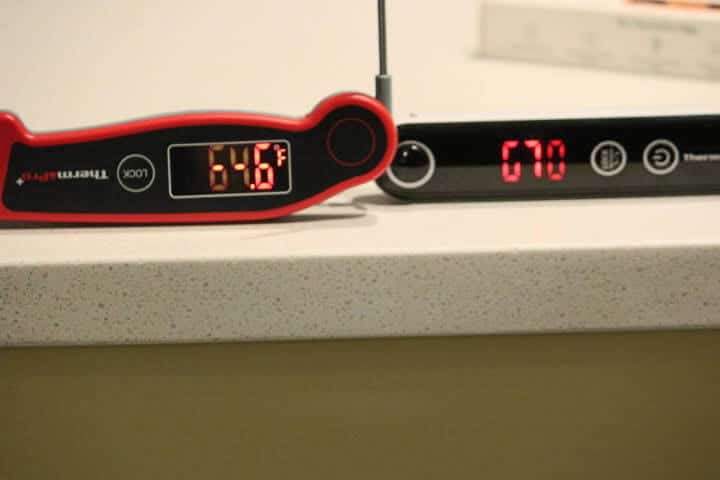 The TP19 (on the left) has a 180-degree rotating display that’s useful for right and left-handed users.

Although the TP18 and TP19 are similar thermocouple-type meat thermometers, the TP19 is a little faster and more accurate in reading temperatures than the TP19.

Here are all of the features that TP19 has that the TP18 doesn’t:

When you combine all of the above features with its sturdier body, the TP19 is a great meat thermometer and a better value than the TP18, even at its higher price tag.

As I mentioned already, the ThermoPro TP19 is a great thermometer under $30. The ThermoPro TP03H is a lower-priced option that can be had at $14.99 and sometimes lower. 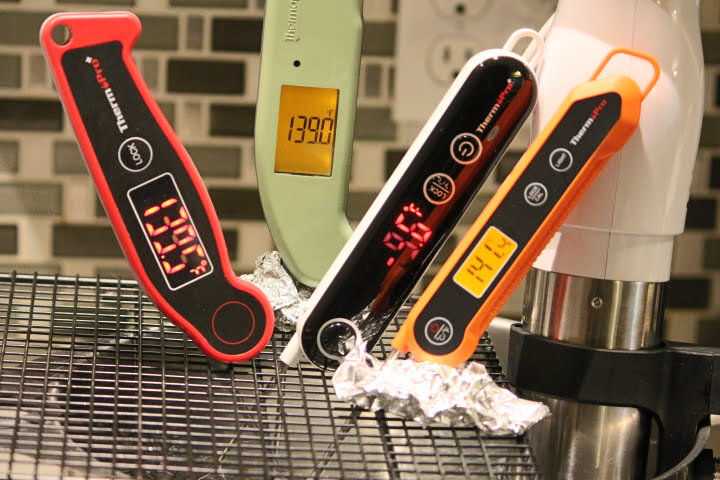 The TP03H has an updated, more durable body than the TP18, but it is a little less accurate. The TP03h is a thermistor-type thermometer with a waterproof rating of IPX6.

The TP03H is a good choice if you are okay with compromising a little accuracy in exchange for durability. Don’t get me wrong, the TP03H is pretty accurate, just not as much as its mates.

I like the ThermoPro TP18 meat thermometer, I just wish it had a sturdier body. It is fast and accurate, but I would take the stronger, water-resistant shell of the ThermoPro TP19 or TP03H models over it instead.

If you can afford it, the TP19 is a little more in price at around $29, but well worth it considering all of its features.

The TP03H is a little less accurate and less expensive but has an upgraded, more durable body.

Which one to choose? That’s up to you.