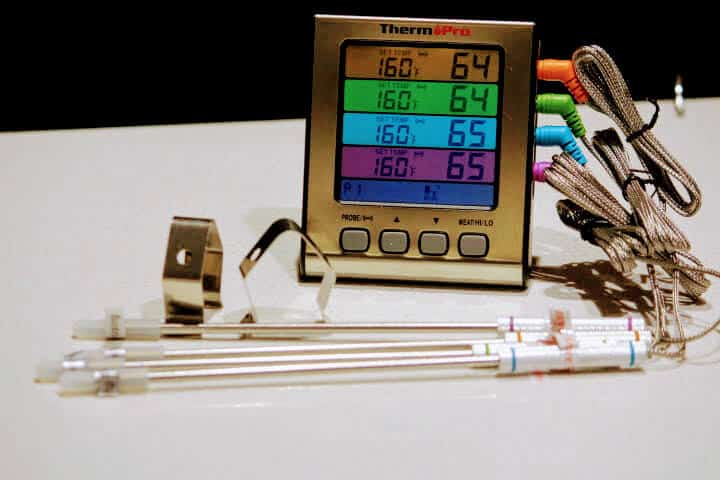 The ThermoPro TP17H Thermometer is a four-probe thermometer designed for your oven, grill, or smoker.

The TP17H thermometer is an updated version of the very popular dual-probe ThermoPro TP-17 thermometer.

With both high and low-temperature alarm capabilities the ThermoPro TP17H can be utilized as an oven, grill, or smoker alarm thermometer. 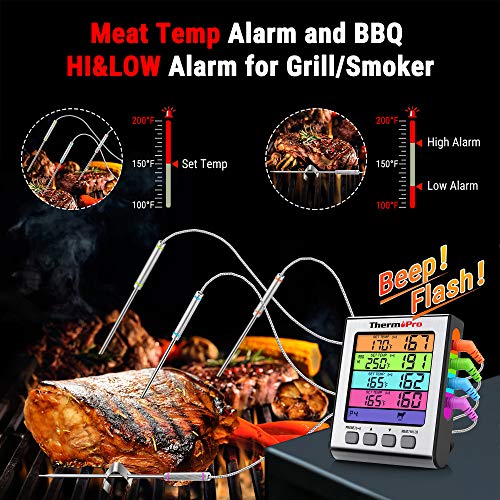 However, you will need to be within earshot of the TP17H’s alarm if you do utilize it to monitor food on your grill or smoker.

If your grill or smoker is relatively close and you don’t do a lot of overnight cooks such as smoking brisket, then the TP17H would be a great kitchen tool to assist you in tracking your food’s temperature.

The TP17H is the first four-probe oven thermometer from ThermoPro, but it features more than just having additional probes.

I will discuss these new features as well as the usability, accuracy, durability, and price of the ThermoPro TP17H to see if it’s a thermometer worthy of your hard-earned money. 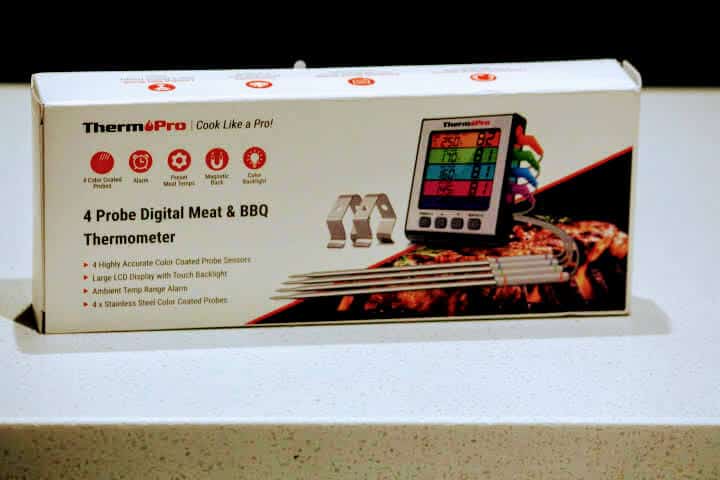 ThermoPro is one of the top manufacturers of thermometers on the market today. They produce many of the top-selling and affordable meat thermometers with thousands of satisfied customers.

The four-probe ThermoPro TP17H Digital Oven Smoker Thermometer is the most recent addition to its lineup of quality products.

You can see a definite progression in ThermoPro’s successive oven thermometer releases, constantly updating the features and usability with each model.

For instance, the TP-16 Oven thermometer had only one probe and no backlight. The TP-16s remedied the light situation but still only had one probe.

The TP-17 added another probe and along with it, high and low-temperature alarm capabilities. 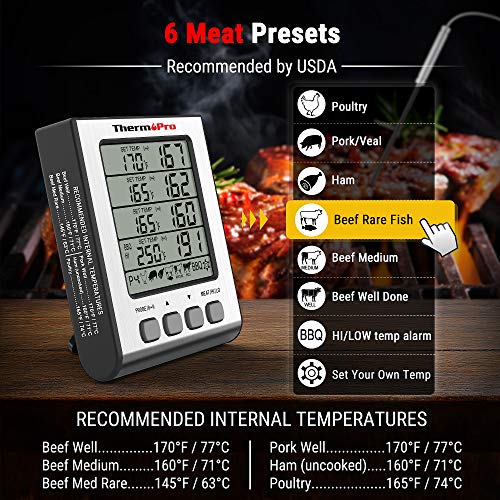 ThermoPro listens to its customers and this helps informs their design decisions. You will see “Feedback Based Design” on the side of every ThermoPro product’s box.

This feedback undoubtedly has led to all of the new features that the ThermoPro TP17H exhibits. What are those features? Let’s look at them now.

Here are all of the important features of the ThermoPro TP17H: 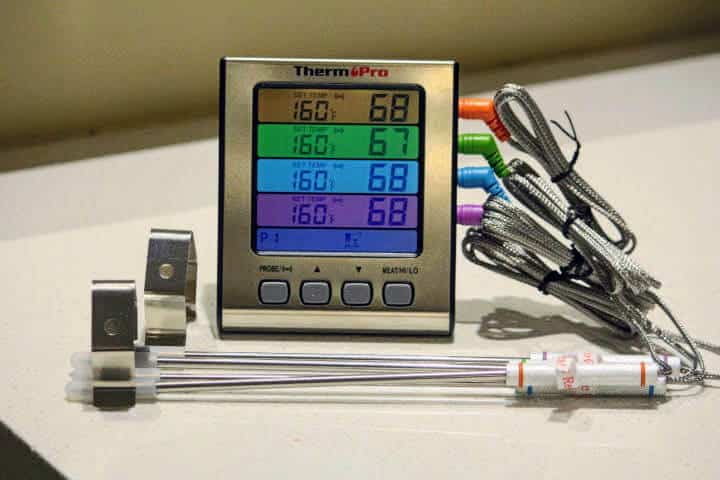 How easy is the ThermoPro TP17H to use? It is very easy to use and you should be up to speed with its operation after looking at the owner’s manual for 5 minutes.

One cool feature is the ability to quickly set the same alarm temps for all of the probes at the same time. 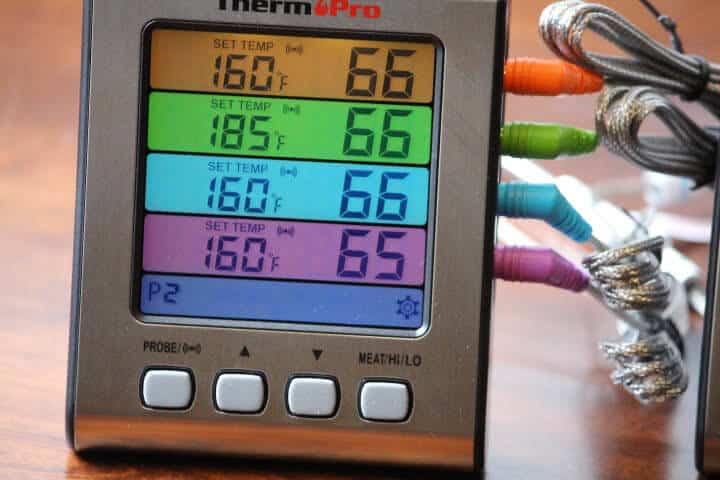 You can set all of your probes to the same temperature. Notice probe 2’s alarm temperature of 185 degrees Fahrenheit.

By selecting any probe and then pressing the PROBE button at the same time as the MEAT/HI/LO you can change all of the probes to read the same. 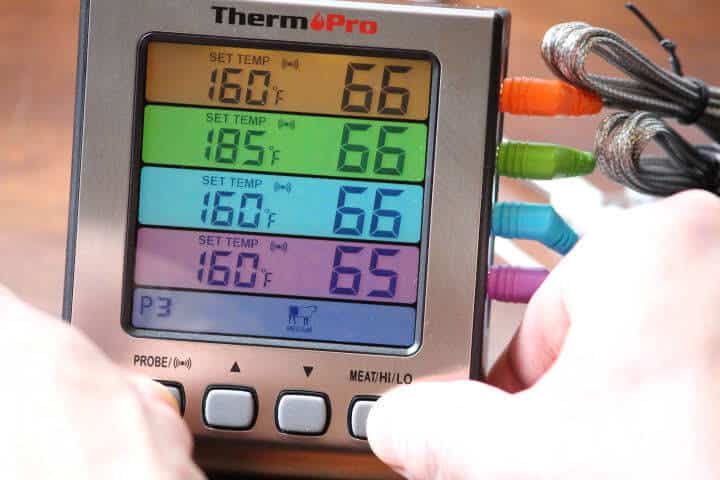 Pressing the PROBE and the MEAT/HI/LO buttons of the TP17H will set all of the probes to 185 degrees when probe 2 is selected. 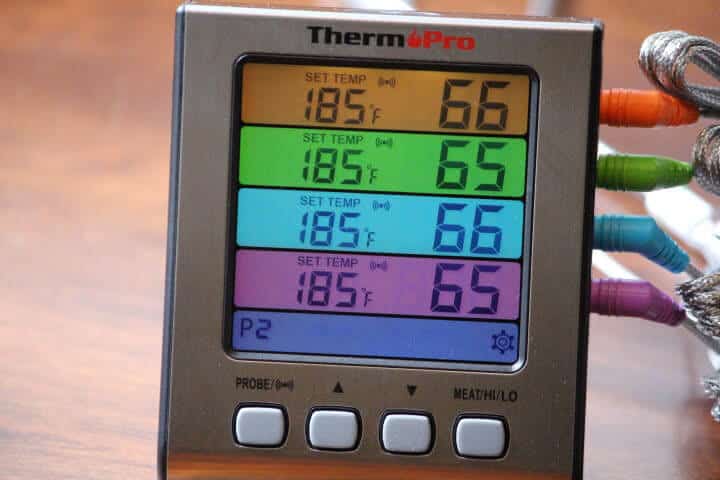 The mulitcolored screen display of the TP17H displaying all of the probe alarms at 185 degrees Fahrenheit. 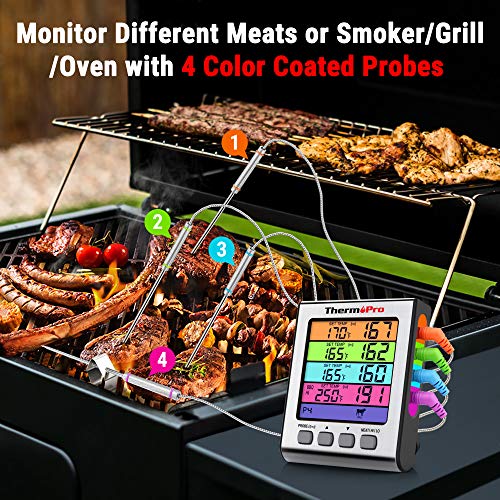 As you can see the ThermoPro TP17H features the usual fast and accurate probes that are included with all of the ThermoPro food thermometers.

The probes are tapered at the tip and give highly accurate readings. The TP17H is just as accurate as ThermoPro’s other digital oven thermometer models, the TP-17 and TP-16S. 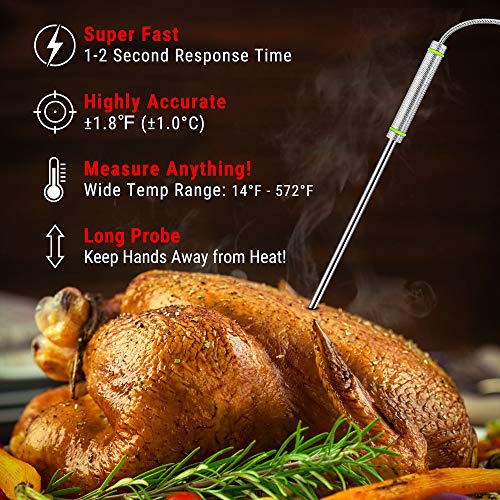 The ThermoPro TP17H has a similar build to the other oven thermometer models by ThermoPro. There’s a hard plastic body with a metal cover on the front around the display screen.

The TP17H is not waterproof and has no IP waterproof rating. This is one area I was hoping would get an upgrade from the prior versions.

Not a huge deal, but if this thermometer is going to be considered an option for your grill or smoker outside, it would be nice if it could handle some rain.

Used as an oven thermometer you shouldn’t encounter any issues, but when water is introduced, that might be another story.

ThermoPro has a three year extended warranty card that they include with all of their thermometers. They stand behind their products. 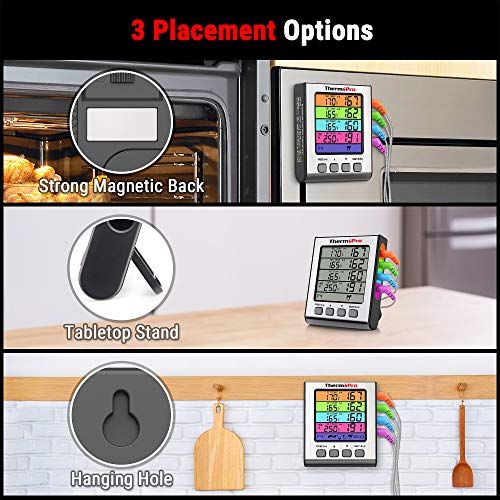 The price of the ThermoPro TP17H is currently in the low $30 range. Considering its four-probe capabilities you’re not going to find many competing thermometers at this price.

There are four probe thermometers in this price range but I do not recommend them because of various issues, most of them being build quality.

ThermoPro is a solid company with great customer service. Each thermometer comes with a warranty card that states you can extend your warranty for 3 years if you register it at buythermopro.com/warranty-registration. 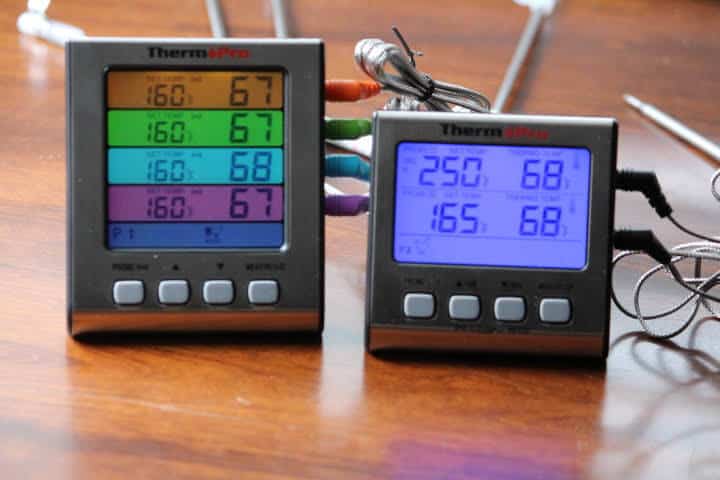 The ThermoPro TP17H is a nice upgrade from the previous TP-17 model.

The color-coordinated probes with corresponding ports are a trait that all of the newer probe thermometers releases by ThermoPro feature.

This color-coordination can be seen in their newer TP-25 Bluetooth thermometer and the TP-27 Remote thermometer.

I would consider this thermometer to be a great option if used as an oven or grill thermometer where you are relatively close by during the cooking process.

Due to its lack of waterproofing, I would be hesitant to recommend this as a smoker thermometer that can be left out overnight. You would also need to be within the audible range of the alarms as well.

Considering how unevenly a large turkey cooks, knowing what each section is reading temperature-wise would help you a great deal. Just a thought.