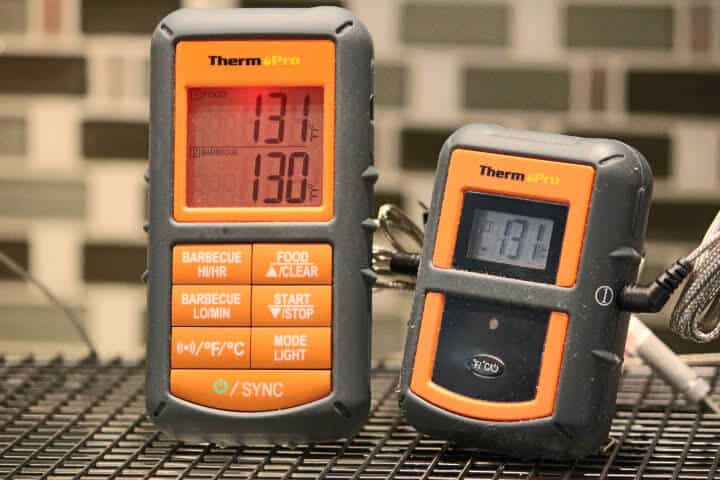 The ThermoPro TP08S Remote Meat Thermometer is just one of the many remote meat thermometers produced by ThermoPro.

With so many models it can get a little confusing. Don’t worry, I’ve got them all and I’ll help you wade through the differences and similarities between all of them.

The ThermoPro TP08S is a dual-probe remote food thermometer that transmits cooking data wirelessly between its transmitter and receiver devices. 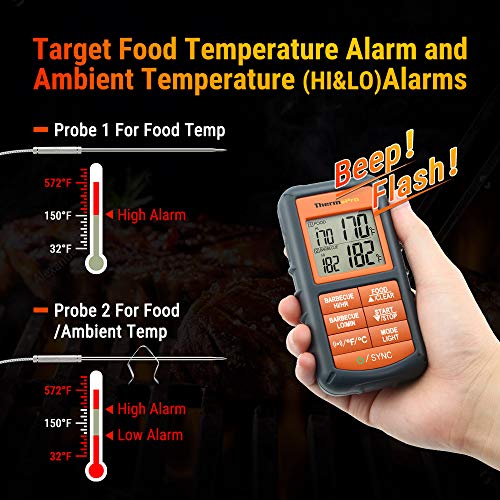 The TP08S is an updated version of the original TP08 model.

ThermoPro also has an updated version of the TP08s with an enhanced 500-foot wireless signal range, see my review of the ThermoPro TP08B Remote Wireless Meat Thermometer.

While the original TP08 model included a 6″ food probe and a 3.5″ rounded-tip ambient temperature probe, the updated TP08S includes two-6″ food probes instead.

So how does this compare to the ThermoPro TP20 Remote meat thermometer? And for that matter, what about the TP07 and the TP06? They all look very similar.

Well, they are different, and in this review of the ThermoPro TP08S Remote meat thermometer, I’ll examine its features, usability, accuracy, durability, and price, as well as how all of the different models are different from each other. 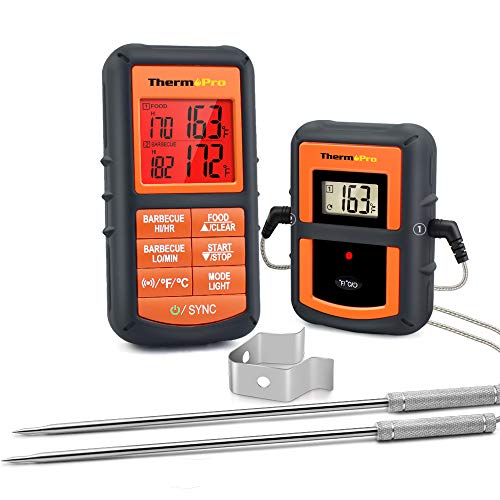 The ThermoPro Tp08S Remote Meat Thermometer can transmit cooking temperatures between its transmitter and receiver devices up to a distance of 300 feet.

One of the main selling points of remote meat thermometers is that they allow you to monitor food temperatures from a distance so that you can focus on other things in life.

You can throw some food on your grill outside and set the temperature alerts on your remote thermometer and go watch the game or prepare side dishes.

They basically give you your time back. The time that’s not spent babysitting food on the grill or in the oven.

You could use the TP08S to monitor two pieces of food, but be aware that the bottom section of the receiver screen is set up for monitoring the ambient temperature of your cooking chamber.

There are ways around this and I’ll show you how in the Using the TP08 to Monitor Two Food Items section.

You would need to track the chamber temperature if you’re cooking with a natural heat source like wood or charcoal on your grill.

The ThermoPro TP08S has both high and low-temperature alarms that are critical if you do any type of food smoking outside. 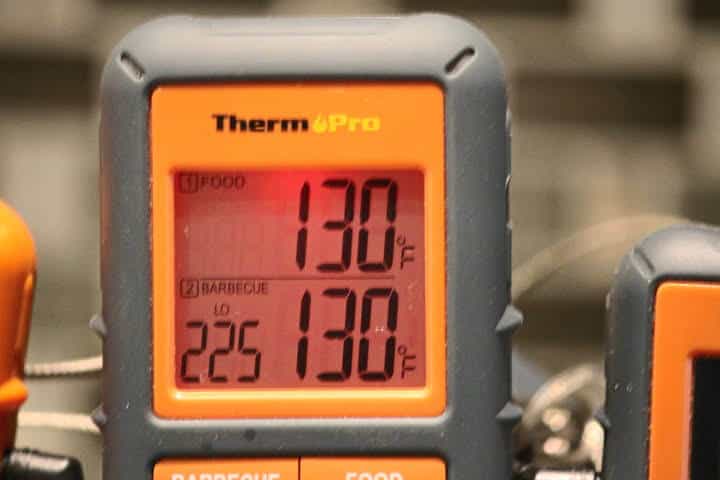 What else does the TP08S feature? Well, I’ll tell you right now.

Here are the components included with the ThermoPro TP08S:

The receiver unit is the part of the TP08S that you input all of your cooking info and the device you take with you to track your food from a distance. The receiver is 4.5 inches tall and 2.5 inches wide and comes with a sweet belt clip. 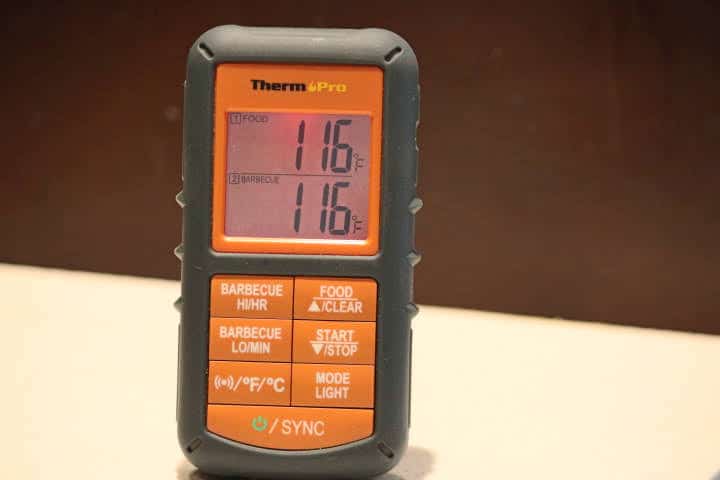 The receiver unit of the ThermoPro TP08S Remote meat thermometer. 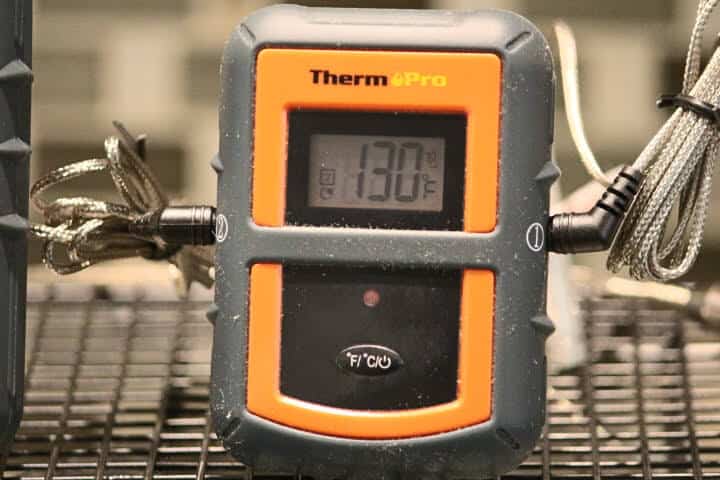 The transmitter unit of the ThermoPro TP08S Remote meat thermometer 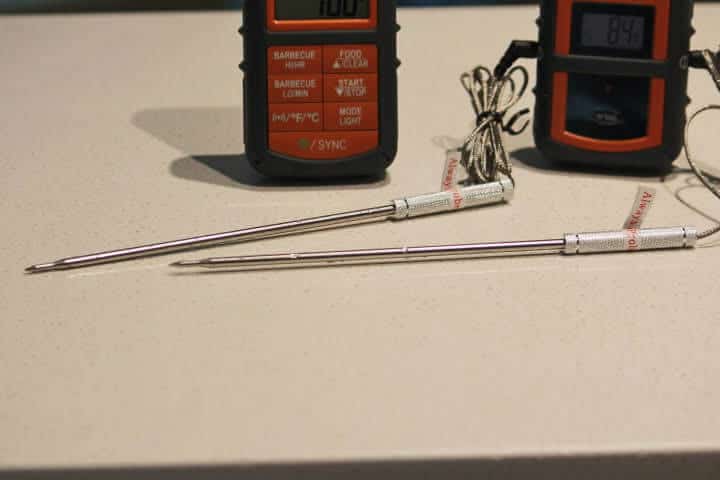 The receiver and transmitter take 2- AAA batteries each, which are included.

There is one grate clip included so that one of the probes can act as an ambient temperature probe on your grill and keep it off the hot grates.

Usability of the ThermoPro TP08S

The receiver unit of the ThermoPro TP08S is the one with all of the buttons and everything is controlled through it.

How easy is the ThermoPro TP08S to use? Like any new gadget, it definitely takes an initial reading of the user’s manual to get the buttons and their functions down.

But once you’re acquainted with everything, the ThermoPro TP08S is relatively easy to use.

Let’s take a look at the buttons on the receiver unit of the TP08S and their functions. Before we delve in, I must mention that the display screen is split into two distinct sections.

As I mentioned earlier, you can use the TP08S to track two pieces of food (see section after this) or one piece of food and the ambient temperature of your cooking chamber. 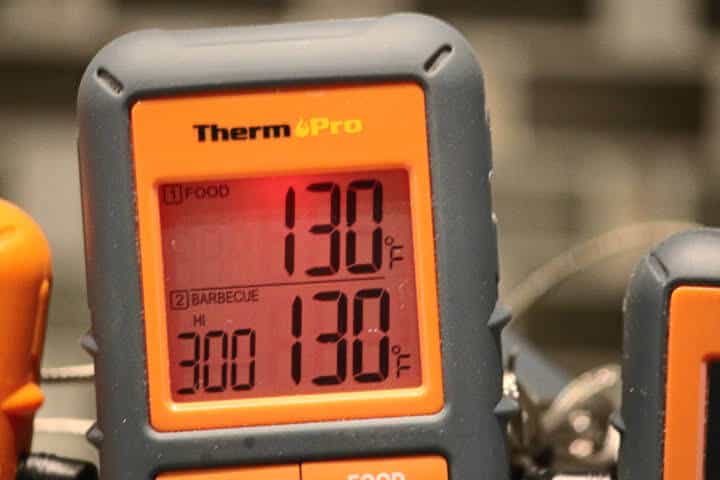 If you’re using one probe to monitor your food and one to track the ambient temperature please be aware that there are dedicated screen sections for each.

The top part of the screen is for monitoring your food and only comes with a high-temperature alert.

The bottom part of the screen is dedicated solely to your barbecue’s ambient temperature and has both hi and low-temperature alert capabilities.

The bottom part of the screen will also switch to a timer display when the Mode/Light button is held down for three seconds. 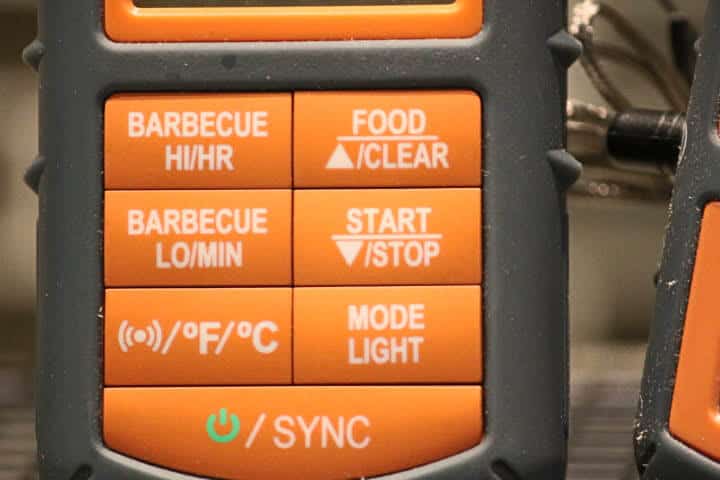 You can monitor two food items with the TP08S even though the bottom part of the transmitter is dedicated to the ambient temperature of your BBQ or oven.

No, and here’s why. The thermometer is designed to set the low-temperature alarm first and go past it before it can activate it.

Only after it goes past the low-temperature alarm setting at the beginning does it become activated.

An example would be grilling two chicken breasts on your grill. You would put your probes in each breast and then set the top section, or number one probe to 165 degrees Fahrenheit.

To set the temperature for the bottom section or number two probe, you would set the LO temperature alarm to something ridiculously low like 32 degrees Fahrenheit.

Then just set the HI temperature alarm for 165 degrees Fahrenheit (or whatever temperature you want).

That’s how you can monitor two food items on the TP08.

Press once to activate or deactivate the temperature alarm. Hold the button down for 2 seconds to switch between Fahrenheit and Celsius.

Turns the receiver off and on by pressing it just once. Press and hold down for two seconds to pair it with the transmitter if it disconnects.

This button controls the light by pressing it once and the display will stay illuminated for 5 seconds. Press and hold for 2 seconds to switch between Thermometer and Timer mode.

Press this button once in TIMER mode to start and stop the timer. It also functions as the down arrow to decrease temperature alerts.

Press once to display the temperature alert setting for your food in the top section of the screen. Also functions as the increase button by holding it down until the digits flash. Also clears the time when in TIMER mode.

Accuracy of the ThermoPro TP08S

How accurate is the ThermoPro TP08S? I tested it against a meat thermometer five times the price and it more than held its own. 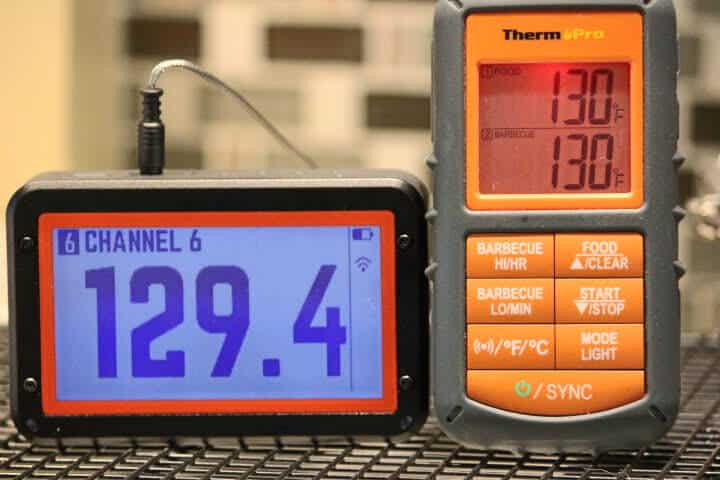 How durable is the ThermoPro TP08S? The TP08S is not waterproof and has no IP rating so I would be careful using it in the rain.

If you live in a rainy climate and do a lot of outdoor cooking then you might want to invest in a waterproof meat thermometer.

If you are looking for a waterproof remote meat thermometer, the Thermoworks Smoke X4 is great. It’s waterproof and you can connect from a long, long-distance away.

The ThermoPro TP08S is encased in a shock-absorbing rubber sleeve, so it will take a tumble or two and still be ok.

Just don’t get it wet and it should be ok.

The probes and their cables are sturdy and heat resistant up to 716 degrees Fahrenheit.

I would say the ThermoPro TP08S is durable as long as you don’t get it wet.

The price of the ThermoPro TP08S generally sits in the $40 price range. This is the price range of most standard remote meat thermometers on the market.

There are some companies that boast of longer transmission signal distances and some do deliver, but the build quality and customer service are lacking.

I like to support quality companies and ThermoPro is one of those companies. They stand behind their products and this is evidenced in their warranty. 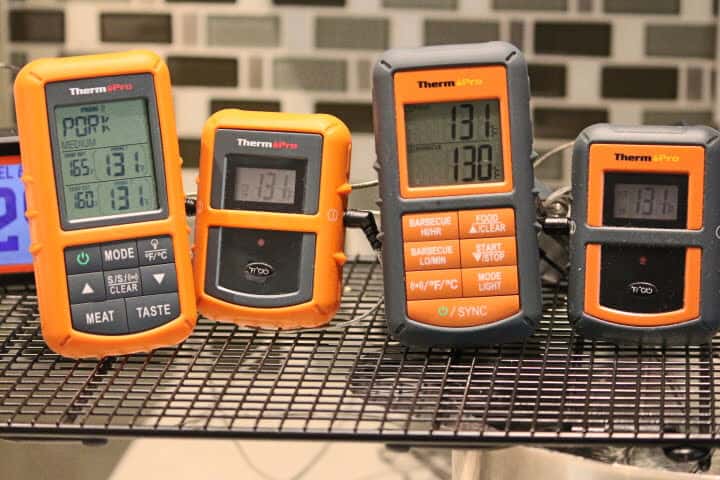 Also, high and low-temperature alarm settings are constantly visible on the screen of the ThermoPro TP20, while the TP08S will only show them after you press their respective buttons. 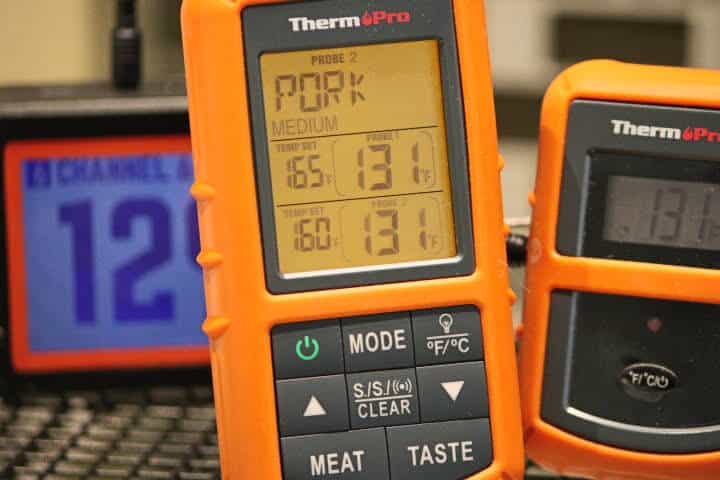 The meat temperature presets on the TP20 might be high for some, as this medium setting for pork at 160 degrees Fahrenheit.

You can set your own temperatures in the TP20, but the main takeaway is that the meat presets probably aren’t needed if you know what you’re doing.

There are some other trivial differences like display screen color (TP20 is bright orange, the TP08S is red), and the TP20 comes with probe cord winders while the TP08S does not.

The light function allows the screen on the TP20 to stay illuminated for 10 seconds versus the 5 seconds with the TP08S.

Both the TP08S and the TP20 meat thermometers have high and low-temperature alarm capabilities.

They both have shock-absorbing rubber sleeve protectors, although the TP20’s sleeve is orange and doesn’t show dust like the dark rubber on the TP08S.

Both have no waterproofing whatsoever. ThermoPro claims that the TP20 is splashproof, but there is no waterproof IP rating to back that claim.

The TP20 is around $14 more than the TP08S at the time of this review. You need to decide if the meat presets and the ability to see your temperature alarms on the screen are worth the extra money for the TP20. 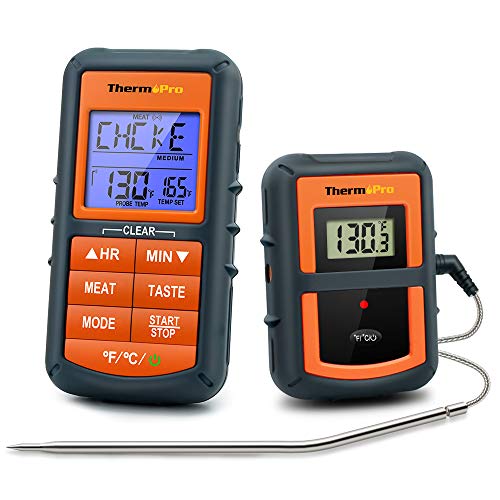 The screen of the TP07 also will change colors from red to green to blue the closer your food gets to being done. The TP08S doesn’t have this smart LCD backlight capability.

They both have a wireless signal range of up to 300 feet.

If you do a lot of grilling on a propane grill and only need to monitor one food item like a whole chicken, then the TP07S would be a good thermometer for you.

If you like having more than one probe and are comfortable setting your own temperature alarms then the TP08S makes more sense.

It is essentially the receiver of the TP07 by itself. Same screen, same buttons.

I know, it gets confusing sometimes. 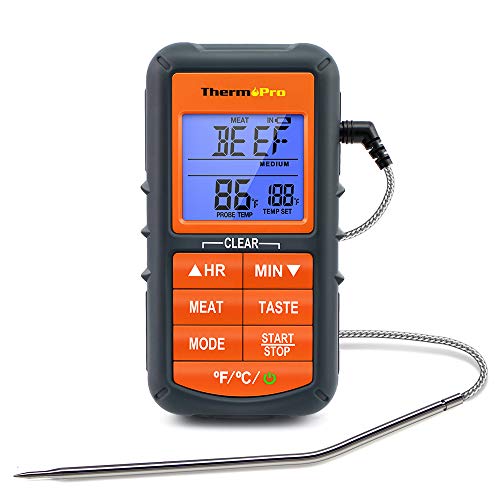 The ThermoPro TP06S is an oven thermometer masquerading as a bbq thermometer due to its appearance. If you have no need for remotely monitoring your food then the TP06S model is a great choice.

The ThermoPro TP08S Remote meat thermometer brings a lot to the table and makes a compelling case to be purchased instead of its more expensive cohort, the ThermoPro TP20.

Both the TP08S and TP20 are dual-probe remote meat thermometers with high and low-temperature alarms as well as signal transmission ranges up to 300 feet.

The TP20 model does have preset meat temperatures and the ability to constantly see what your alarm temperatures are set to on the screen.

The TP08S doesn’t have these features. Both are solid thermometers.

You need to decide if those extra features are worth the higher price tag for the TP20. I think you would be happy with either thermometer but I feel the TP08S is a better value for those of you that can set your own temperature alerts.