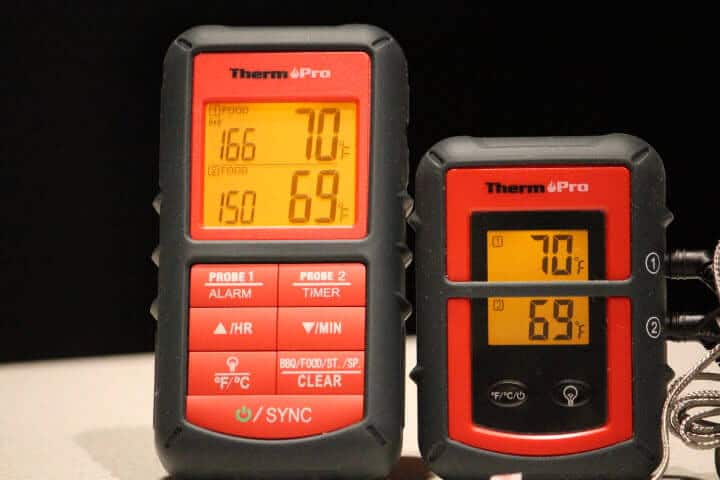 At the time of this review, you won’t actually find any mention online of the model number for this thermometer. It is simply referred to as “ThermoPro 500FT Wireless Meat Thermometer”.

The side of its box reveals the model number, TP-08B. When ThermoPro updates their thermometers they will generally add a different letter to the end of the number, or change the number entirely. 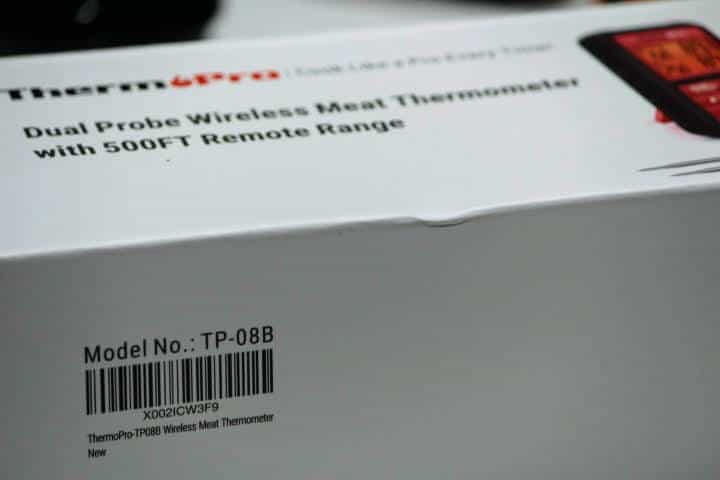 The side of the box of the ThermoPro Dual Probe Wireless Meat Thermometer with 500FT Remote Range reveals a model number of TP-08B.

I’d be lying if I said I knew the rhyme or reason behind the model numbers. I am just going to refer to it as the ThermoPro TP08B and call it good.

The TP08B features an enhanced 500-foot remote wireless signal range and a transmitter that displays the temperature of its two temperature probes simultaneously.

Although the enhanced wireless signal range and a dual-screen transmitter are the two major upgraded features of the ThermoPro TP08B, it is more intuitive in its usability as well.

In a nutshell, the TP08B’s buttons are easier to figure out than prior versions.

Currently at close to the same price as the TP08S and considerably less than the ThermoPro TP20, the ThermoPro TP08B’s superior signal range and features make it a good value.

In this ThermoPro TP08B Remote Meat Thermometer review, I will discuss its features, usability, accuracy, durability, and price to determine if it’s a meat thermometer worth your money. 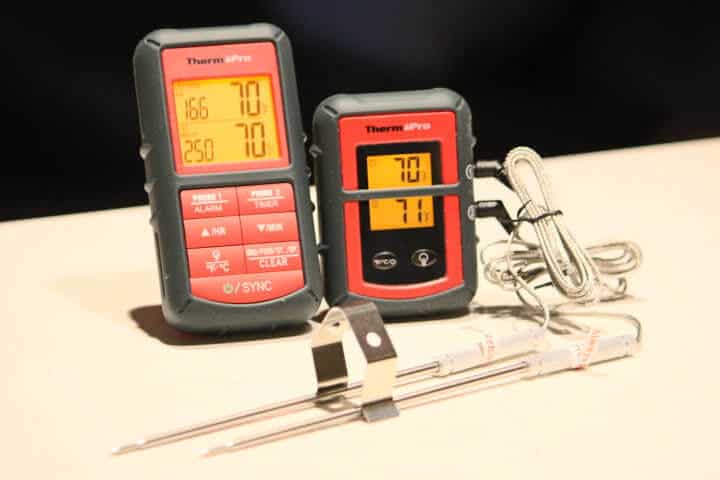 I mentioned earlier that this thermometer isn’t marketed with its model number in the title. I’m not quite sure why this is but it could be that this is a transitional model between the older line of ThermoPro remote thermometers and the new ones.

The ThermoPro TP08 incorporates some of the features of the newer models in the same body style as the older ones.

The 500-foot signal range and multi-screen capability of the receiver (the transmitter in the newer models) are two such features.

The TP08B is also easier to use than its predecessor, the TP08S. Not that the TP08S is hard to use, it’s just that the TP08B has streamlined some features.

One example of this enhanced usability is you no longer have to find a workaround solution if you want to monitor two pieces of meat. The TP08S model is split into two distinct sections, one for food and one for barbecue.

Although you can track two pieces of food, it takes a little finagling to do it. I go into more detail on this in my review of the ThermoPro TP08S.

The TP08B gives you the option to switch between FOOD and BBQ modes, bypassing this hassle.

You can see how the TP08B and the TP08S differ in their comparison section below.

Let’s look at the features of the ThermoPro TP08B. 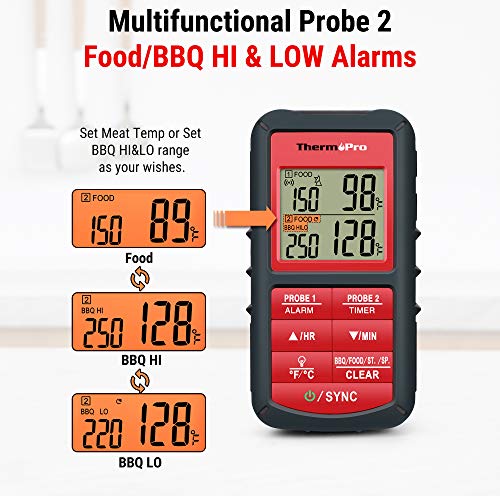 Features of the ThermoPro TP08B

Here are all of the important features and components of the ThermoPro TP08B:

How easy is the TP08B to operate? It’s pretty easy as thermometers go. Just press the power button. To set the temperature alarm for probe 1, press the probe 1 button.

It will begin to flash. You then can adjust the temperature up or down using the arrow buttons.

If you want to activate or deactivate the alarm just hold down the probe 1/alarm button for three seconds. That’s all you need to know for the top display screen section. 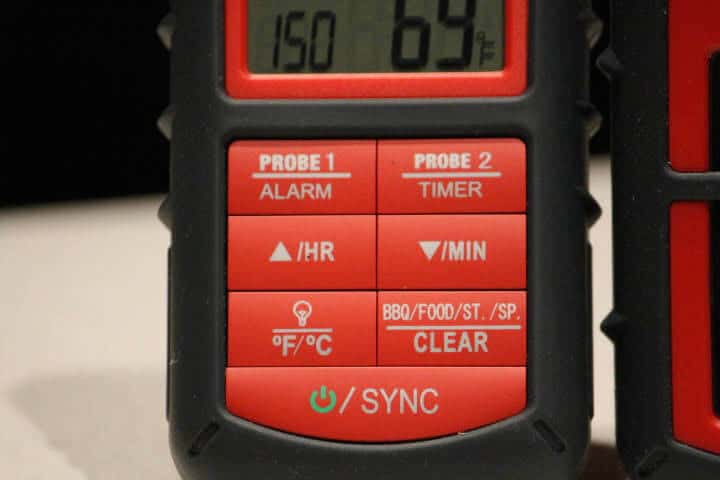 Closeup image of the buttons on the front of the ThermoPro TP08B Receiver. 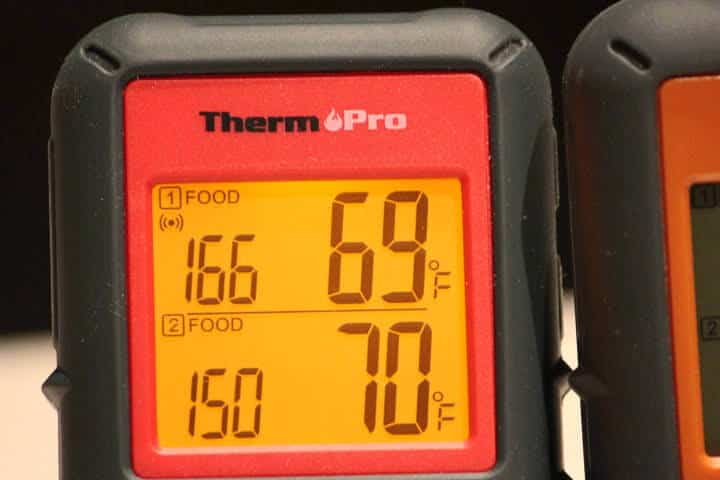 You can see in the picture above that I’ve set the temperature alarm to 166 degrees Fahrenheit in the top section. Notice that both sections are set to the “FOOD” setting.

You can’t change the top section away from the “FOOD” setting, but you can with the bottom section.

To change the bottom section to the “BBQ” ambient temperature setting, just press the bbq/food/st./sp/clear button once. 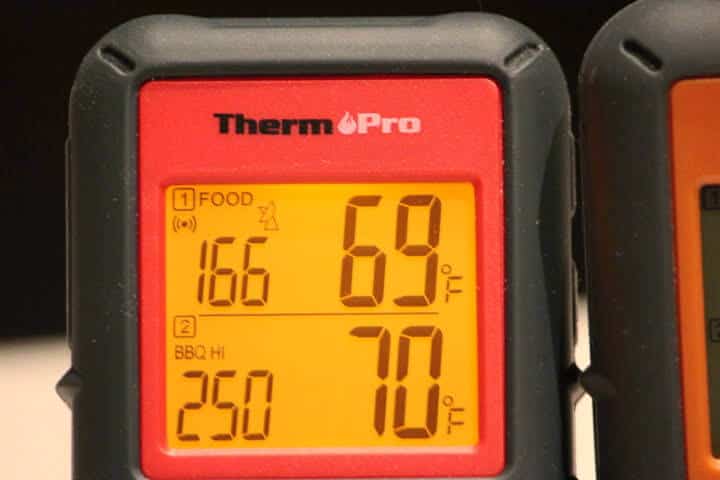 This will change the bottom screen from food to BBQ mode. It will start with the BBQ HI alarm setting. To adjust this temperature press the probe-2 button once and use the arrow buttons to adjust the temperature up or down.

You can set the BBQ Low alarm by pressing the probe-2 button again to adjust it with the arrow buttons. Pretty straightforward. 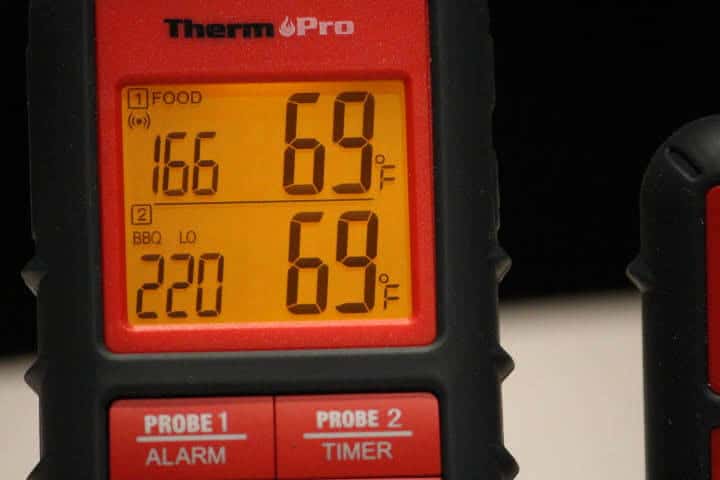 There is also a timer if you need one. Just press and hold down the probe-2 timer button for 3 seconds and the bottom section of the screen changes to a timer. 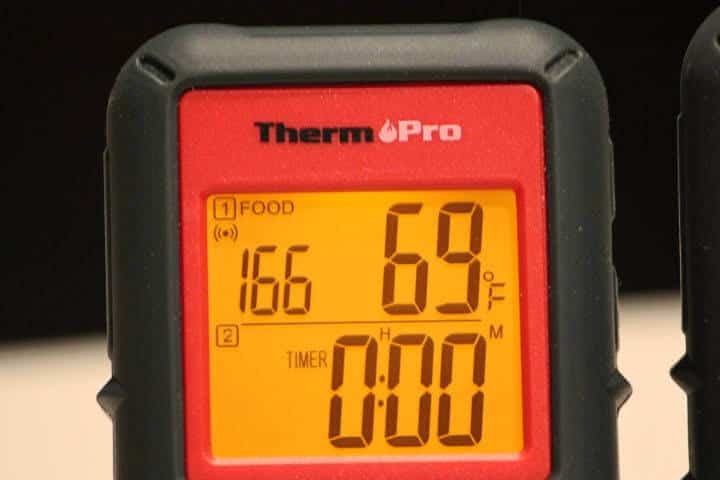 The ThermoPro TP08B in timer mode.

The transmitter of the TP08B is also pretty straightforward to use. By pressing the light button the backlight illuminates for 15 seconds. To switch between Celsius and Fahrenheit press the power/F/C button and hold it for 3 seconds. 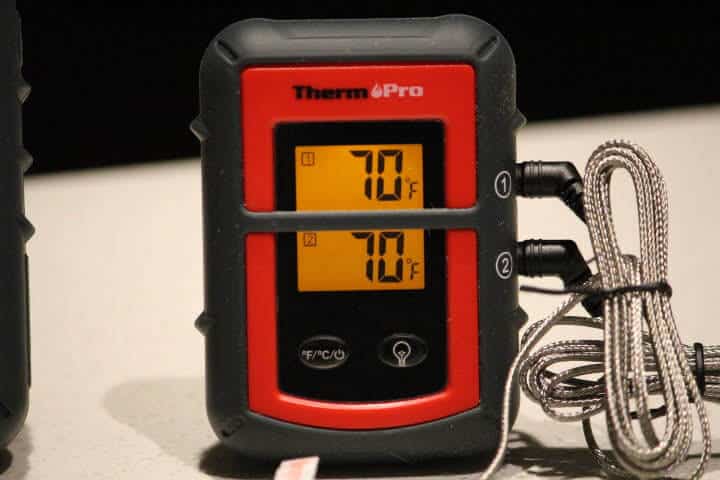 The transmitter of the ThermoPro TP08 with its dual-screen display.

Wireless Signal Range of the TP08B

Is the wireless signal range of the ThermoPro TP08B legit? I would say yes. When I go on neighborhood walks sometimes I’ll bring some of my remote thermometers along with me to test the signal range.

I do get looks from people wondering why I have so many multi-colored cell phones I’m looking down at. If they only knew, it’s exactly as weird as it looks.

The wireless signal range between the transmitter and receiver of any thermometer can be affected by obstacles in the way.

It is difficult to sometimes get the same reported signal range as the one claimed by the thermometer’s manufacturer. 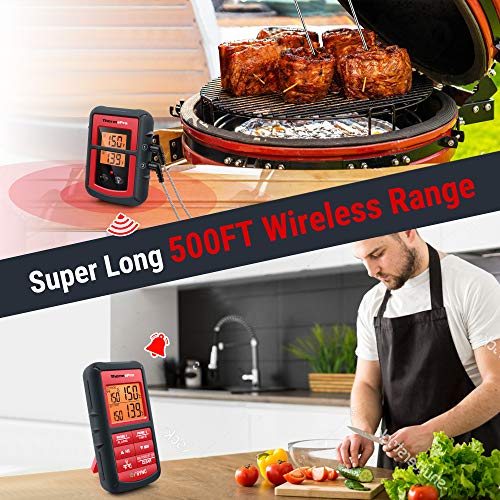 I have multiple trees and houses that obstruct the wireless signal when I test it on my walks.

After testing the wireless range of the TP08B alongside the TP08S, TP20, and the newer TP28 remote meat thermometer on three separate walks around the neighborhood I can safely say that the wireless signal is legit.

The signal isn’t the same for each walk but the TP08B’s wireless range easily surpassed 400 feet each time. The newer TP28 model kept pace with it, while the TP08S and TP20 models ranged anywhere from 250 to 350 feet.

Not many people need that kind of distance in the real world. The wireless distance measure is an indicator of signal strength, or how well it handles obstacles.

Yes, all of the aforementioned models do in fact.

A lot of people like Bluetooth thermometers but I will say that you will get a more reliable signal with a remote thermometer.

If you live in a densely populated area you might consider going with a remote thermometer.

How accurate is the ThermoPro TP08B? I tested it in a 105 degree Fahrenheit sous vide water bath with some other remote meat thermometers. It performed just as well as the rest.

I consider the TP08B to be accurate. 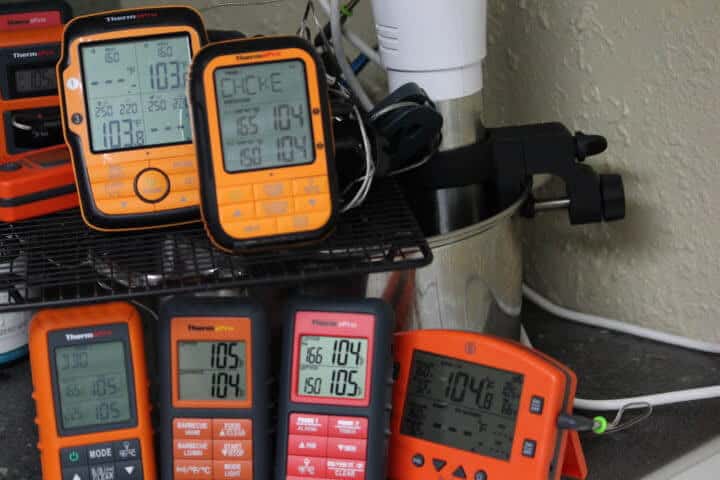 Is the TP08B durable? It has no waterproof rating so I probably wouldn’t leave it outside in the rain.

It does come with a shockproof rubber sleeve on the outside of both the transmitter and receiver units. I haven’t dropped this unit yet but I have dropped other ThermoPro models with the rubber sleeve and it does survive drops from your grill onto concrete pavers.

And like all of ThermoPro’s thermometers, it comes with a warranty that you can extend when you register it online at buythermopro.com/warranty-registration.

Their customer service is excellent as well. Perhaps the best indicator of the quality of ThermoPro thermometers is the high ratings every model receives online.

As long as you don’t leave the TP08B in the rain too long I think it’s a thermometer that will perform for you for a long time. 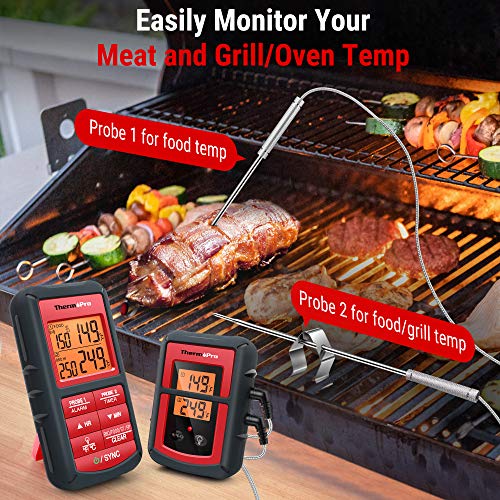 Price of the ThermoPro TPO8B

Considering that the wireless range of the TP08B is a tad bit better than the other two models  I would consider it a good value at its current price. 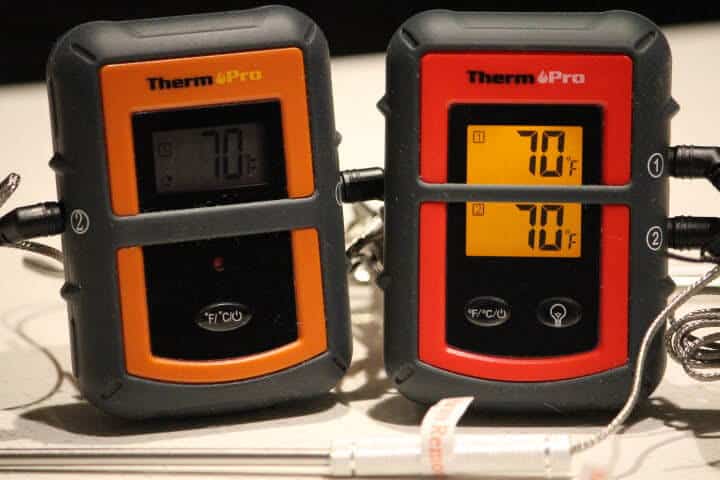 Here are the main differences between the two: 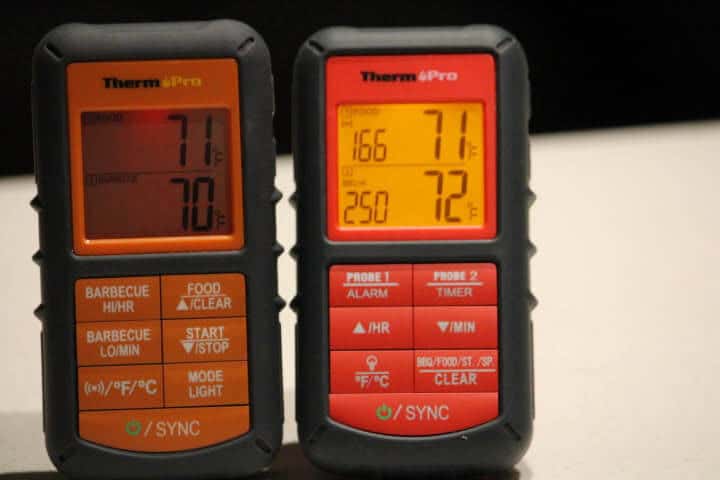 The ThermoPro TP08B Remote Meat Thermometer is an interesting study in the evolution of ThermoPro’s product line.

It appears to be an “in-between ” model that has some of the features of ThermoPro’s newer remote thermometers, yet it has the old body style of previous models.

And the fact it’s not really marketed (yet) with its model number might point to it being a limited production. Who knows.

What I do know is that the TP08B offers some of the advanced features of the newer remote thermometers at a lower price.

I consider it a better option than the ThermoPro TP08S and even the TP20 at its current price tag.

The TP08B’s solid wireless range, upgraded dual-screen transmitter, and better usability make it worthy of a place in your grilling toolkit. 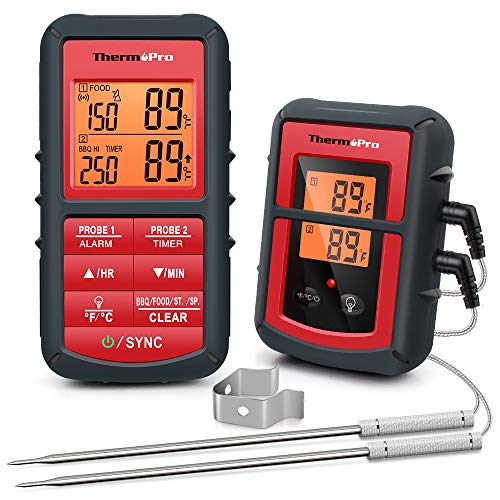 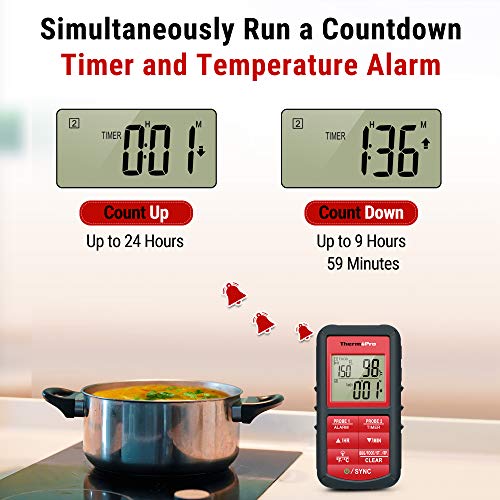 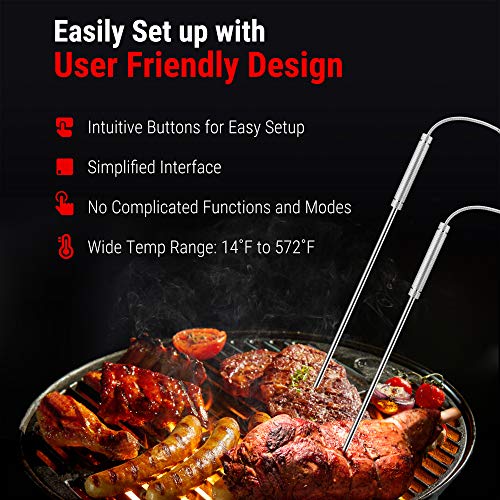 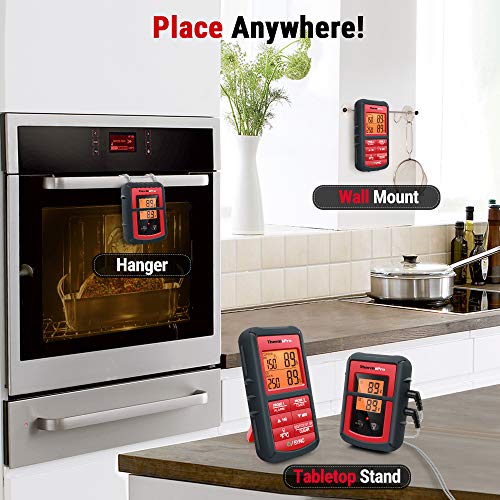