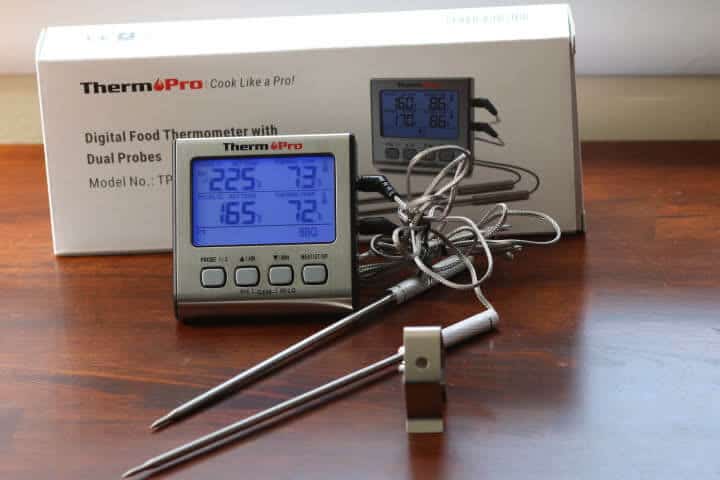 This is my review of the ThermoPro TP-17 Dual-Probe Meat Thermometer. The TP-17 model is ThermoPro’s most advanced model in its oven meat thermometers lineup.

This multi-probe, multi-alarm functionality can be useful for oven cooking as well as outside on your grill or smoker.

If you are looking for a meat thermometer that will alert you when your food is done in the oven or on the grill when you’re far away, I suggest you take a look at the ThermoPro TP-25 Bluetooth Meat Thermometer.

With its price point only a few dollars more than the other models, I am recommending the ThermoPro TP-17 over the TP-16S and TP-16.

In this review, I will look at the TP-17’s features, usability, accuracy, durability and price to see if this probe meat thermometer is worth an investment.

ThermoPro just released an upgraded version to the TP-17, check out my review of the ThermoPro TP17H here.

The ThermoPro TP-17 is the lastest model in their lineup of oven probe meat thermometers. With each new release going back to the TP-16, they add more features that were lacking in the prior model.

The most recent update is the TP-17 Dual-Probe Meat Thermometer. The TP-17 is larger than the previous models and has a backlit screen that lights up whenever your press any of the buttons. 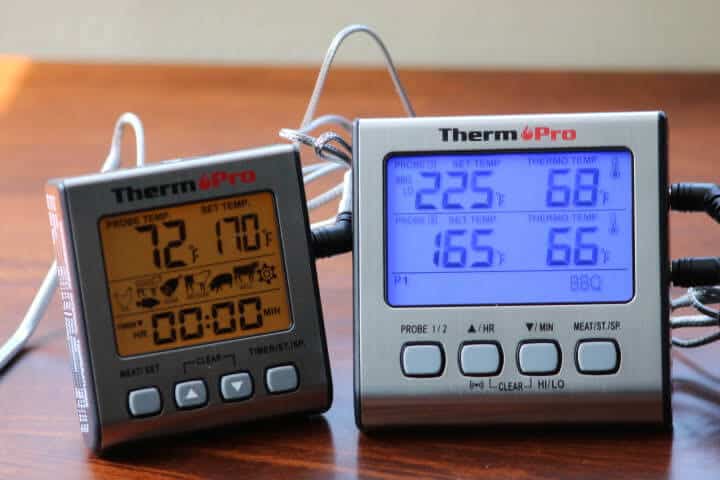 The first model, the TP-16, doesn’t even have a light. The next one, the TP-16S has a separate light button on the top of the thermometer body. Now the light feature is integrated into all of the functions in the TP-17.

The two most important upgrades for me are the low-temperature alarm function and dual-probe capability.

Here are the features of the ThermoPro TP-17.

The grill clip is to keep your probe off the grate of your smoker or grill if you are using it to track the ambient area temperature.

These are the longest meat thermometer probes you’ll find that already come with the thermometer. This is good and bad. These are great for getting to the center of thick roasts but they make it difficult to monitor thin foods.

The idea behind the long probes is that you’ll probably want to use an instant-read meat thermometer on thinner foods anyway as they will not take much time to cook. No sense in putting a huge probe in a hamburger that will take 5 to 10 minutes to cook.

There is a dedicated timer that takes over the bottom of the screen when you change to timer mode on the switch in the back. Here’s my beef with this configuration.

This timer mode takes away the display screen sections for your second probe. The second probe display reading gets bumped up to the top section, where the readout alternates between probe one and probe two.

This is fine if you are only using one probe but it is cumbersome when using two probes. I don’t use a timer much anyway so this isn’t a problem for me. If you are a timer person this is something to consider.

The display lights up when you press any button to operate it. This is a huge improvement from the original TP-16 that didn’t even light up. So long ago, oh those were simpler times. 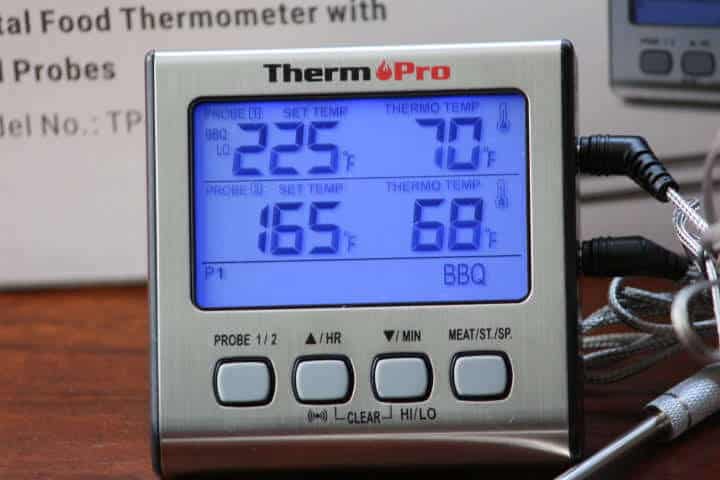 The ThermoPro TP-17 has a low-temperature alarm that is adjustable, here it’s set at 225 degrees Fahrenheit.

This is a great feature in that if you are grilling over charcoal or hardwood, the TP-17’s low-temperature alarm will notify you if your grill or smoker’s temperature drops.

The prior versions did not have a low-temperature alarm capability. It’s because of this feature, along with its two-probes, that make the TP-17 a good thermometer for the grill.

Mind you, it does have its limitations in that you need to be within earshot of the alarm when it goes off. If you are hanging out on your patio or in your yard nearby this shouldn’t be a problem. If you are someone that likes to mingle and venture far from your grill I would suggest the ThermoPro TP-25 Bluetooth Meat Thermometer.

The TP-17 is relatively easy to use after a few cooking sessions. As I noted earlier, the timer function will take away part of the screen if you are using two probes. I suggest not even venturing into this territory and use the timer on your phone.

One other thing to mention is the preset meat temperatures on the TP-17 are way off. The rare beef setting is 145 degrees Fahrenheit, need I say more? My suggestion is to set your own temperatures in the user-defined area.

The probes are pretty long and are meant for larger pieces of meat so I wouldn’t advise keeping track of anything thin with them. However, for something like a whole chicken or a turkey the probes work great. They are long enough to reach even the deepest part of a large turkey breast. 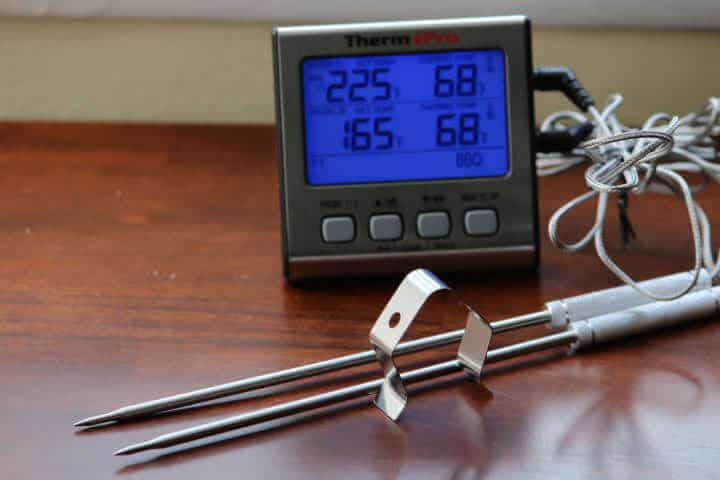 The ThermoPro TP-17 with its extra-long 8.5 inch probes and a grill clip.

I tested the accuracy of the ThermoPro TP-17 against the Thermoworks Smoke X4 and the SmokeBloq meat thermometers in a 135-degree sous vide water bath. Although not as fast as the other upscale thermometers, the TP-17 performed quite well and it was in the ballpark in terms of temperature monitoring.

Is the ThermoPro TP-17 a durable meat thermometer? The thermometer body, while larger than previous versions, is pretty much the same build.

It has a hard plastic body with a metal cover on the front side where the display screen is at. This is basically a larger version of the TP-16 and TP-16S in terms of body design.

However, it is the upgraded, sturdier probes that make the TP-17 a better choice in terms of durability. The probes of the previous versions were attached to their cables by a simple crimp of the metal.

This could lead to the probes being pulled away from their cables or water finding its way into the probes themselves.

The newer probes of the TP-17 have non-slip grip handles that are easy to insert and remove from food. The handles are heat resistant up to 716 degrees Fahrenheit.

Although not waterproof I don’t foresee a problem with the TP-17 during everyday kitchen use. I would caution using it outside if rain is in the forecast.

The TP-17 is a little more expensive than the other ThermoPro oven meat thermometers. However, it brings more than enough to the table to justify the few extra dollars.

The fact that it has an extra probe along with its low-temperature alarm makes the TP-17 an attractive buy. Unlike the other prior versions, the TP-17 can be used as an oven thermometer and a thermometer to monitor longer cooks out on the grill or smoker.

However, with its dual-probe functionality and low-temperature alarm capabilities, the TP-17 is useful as a grill and smoking meat thermometer as well. That is if you stay within range of hearing the alarm.

Well, that’s it for this review, if you have any questions just leave a comment below, thanks for reading.