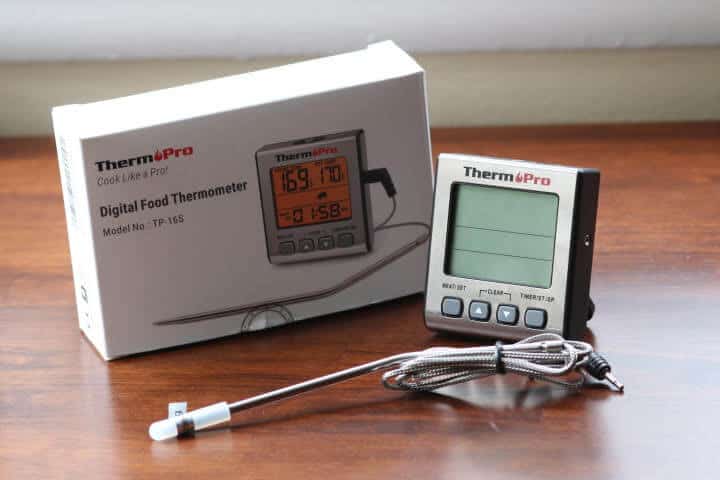 The ThermoPro TP-16S Meat Thermometer is a single-probe meat thermometer that is best utilized for oven cooking.

The TP-16S  is an upgraded version of the ThermoPro TP-16 in that it has a timer function as well as easy-to-use buttons on the front.

In this review of the ThermoPro TP-16S meat thermometer, I will discuss its features, usability, accuracy, durability, and price relative to the competition.

I will also compare it to the dual-probe TP-17 model and examine if the TP-17 is a better option.

ThermoPro is a major player in the meat thermometer space. They are consistently among the top-selling thermometers on the market and there’s a good reason for this, they make good thermometers.

As I mentioned before, the TP-16S is the upgraded version to the TP-16. The most glaring weakness of the older TP-16 is that there is no backlight. The TP-16S model has a backlight button on the top of the device.

The older TP-16 had 3 buttons on the top of the unit and two switches on the back, which is cumbersome to use quite honestly. The buttons share multiple functions so it takes some time getting accustomed to it.

The newer TP-16S has a more intuitive, user-friendly design with all of the buttons for everyday use on the front.

There are six different preset temperatures to use. However, these temperatures are on the high-side, I would suggest inputting your own temperatures in the user-defined area.

The probe has a step-down design and is attached to the cable with a crimp on the end. The probe cable is heat resistant up to 716 degrees Fahrenheit.

There is a backlight button on top and will illuminate the display screen for 10 seconds when it’s pressed.

If you want to keep track of what you’re cooking or other side dishes there is a dedicated timer section at the bottom.

The ThermoPro TP-16S does take some time getting accustomed to its buttons and their different functions. This is true of most probe thermometers that are controlled by buttons under the device’s screen.

The one area in which this thermometer is lacking is the preset temperatures. There are seven different preset temperature settings. Six of them are represented by pictures of various animals of pigs, cows, fish, etc.

Here are the temperature presets:

The USDA has stated that pork is safe to eat at 145 degrees, so I wouldn’t use the pork preset under any circumstances.

I would stick to using the user-defined temperature setting. That way you can determine your own level of doneness and ensure you’re not serving your guests over-cooked 145-degree prime rib.

One other feature that this thermometer doesn’t have is a low-temperature alert. This is probably because it’s a single probe thermometer and they assume you are using that probe for food.

However, if you’re like me and have multiple thermometers it’s nice to put some of them to work when other thermometers are occupied.

If the TP-16 had a low-temperature alarm I could use it to alert me when my smoker or grill drops in temperature. Not a huge deal but something to consider.

The ThermoPro TP-17 Dual Probe thermometer does have a low-temperature alarm if you want that option.

To gauge the accuracy of the TP-16S I tested it against the Thermapen MK4 and the Thermoworks Signals meat thermometers in a 140-degree Fahrenheit water bath.

Although not as fast as the Thermoworks models, the TP-16S was still pretty fast and arrived at around the same temperature.

I will continue to monitor the accuracy of the TP-16S and update you if anything eventful pops up.

As of right now, I would say the ThermoPro TP-16S is pretty accurate.

The main thermometer body is comprised of hard plastic and a thin metal cover on the front. There is no mention of the thermometer being waterproof so that is something to take into account if you are using it outside.

I think the TP-16S is best utilized as an oven thermometer. You can use it as a grill thermometer but be aware it probably won’t like being used in the rain.

This leads to a few problems. It is easier for water to get into the probe when it’s washed if you’re not careful. Another thing is that the probe can come loose from the cable after extended use from the constant yanking of inserting and pulling the probe out of food.

The ThermoPro TP-17 comes with probes that have sturdier probe handles.

Like all of ThermoPro’s meat thermometers, it comes with a warranty card that will extend the warranty up to 3 years. Their customer service is also friendly and helpful in case you do run into any problems.

The price of the TP-16S is the middle range for oven meat thermometers. There are definitely cheaper ones out there but they are mostly junk.

The original TP-16 is generally around five bucks less and might be a better option for those of you that don’t need a timer with your thermometer.

The dual-probe ThermoPro TP-17 is a few bucks more and has both high and low-temperature alarm capabilities. If you do any sort of outdoor cooking, the TP-17 is definitely a better option than the TP-16S.

This leads me to my final thoughts on the TP-16S.

The ThermoPro TP-16S is a single-probe oven meat thermometer that has some nice features. However, the problem it has is that it doesn’t create enough of a value proposition to set it apart from the other probe meat thermometers in the ThermoPro family.

Does the backlight and easier-to-use buttons make it a better choice than the original TP-16? Perhaps.

But the thermometer that’s one step up from it, the ThermoPro TP-17 has a lot more going for it. It has two probes that are more durable, and high and low-temperature alert settings.

This makes it usable in your oven and outside on your grill or smoker.

Also, at the time of this review, it is only a few bucks more.