At What Temperature is Flank Steak Done? 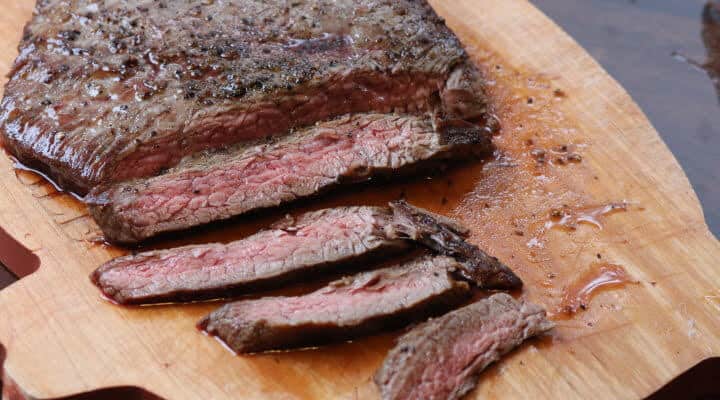 You just pulled flank steak out of the fridge to cook for dinner and you’re probably wondering, at what temperature flank steak is done? Since it’s a steak, do you cook it like you would cook a ribeye or new york strip steak?

Well, yes and no. It is a steak, but it has less fat and a lot more fibers (it is the cow’s abdominal muscles) than ribeye and new york steaks. Not only that, but a standard flank steak will also weigh over two pounds easily.

Since flank steak is bigger, leaner, and more fibrous, it should be prepared a little different than your standard new york or ribeye steak.

Before we take a look at some of the best ways to prepare flank steak, let’s figure out the best temperature for flank steak when it’s done. 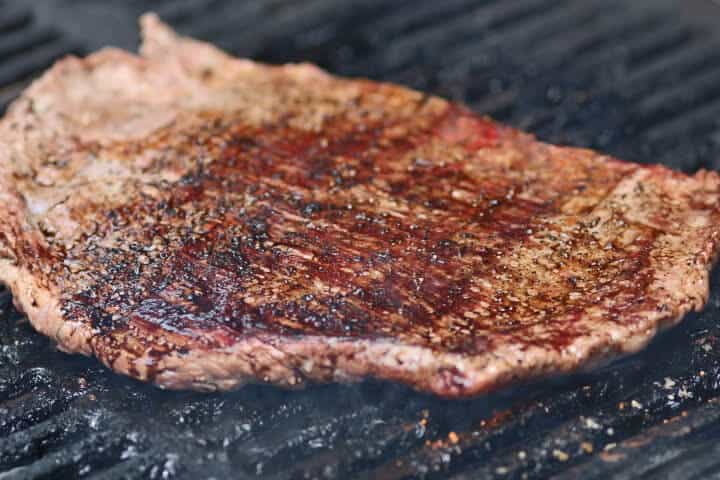 What is the Internal Temperature of Flank Steak When Done?

When you ask a number of chefs and weekend grillers how they like their flank steak cooked you will get a myriad of different answers.

Some prefer their flank steak rare, usually between 120 to 125 degrees Fahrenheit. Although I prefer my new york strip steaks in this temperature range, I think it is a little low for flank steak. More on this in a minute.

Other people prefer their flank steak in the 130 to 140 degrees Fahrenheit/ 54 to 60 degrees Celsius range or medium-rare to medium. 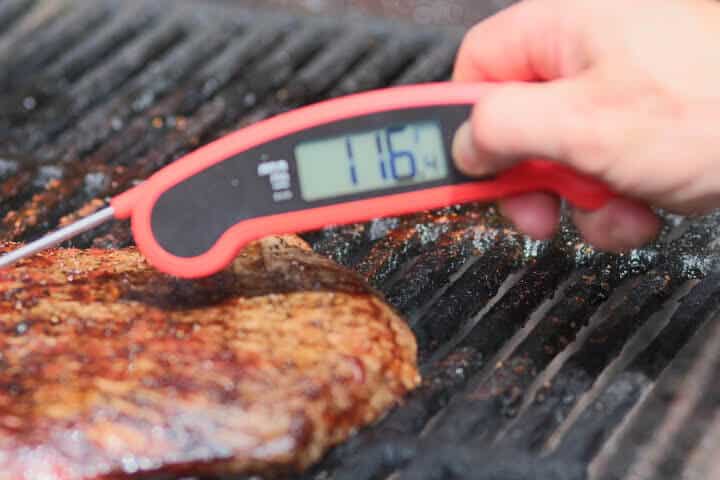 Flank steak on the grill registering 116 degrees Fahrenheit, almost there!

Rare or Medium Rare? The Choice Is Yours

I opt for right in the middle of that range, 135 degrees Fahrenheit, generally pulling it off the grill at 125 to 128 degrees Fahrenheit. The carryover heat of the cooked flank will generally raise the internal temperature anywhere from 5 to 10 degrees.

I find that if you pull your flank steak off and serve it at a lower temperature it will be a little chewier. You need to give the fibers a little more time on the fire, creating a less rubbery texture.

Flank steak has a lot of muscle fibers running through it so we need a different approach from the traditional burn and turn of most steak grilling.

Although you aren’t going to get a full breakdown of collagen yet, the extra time on the grill will start to weaken the sheaths around the collagen in the meat. This generally occurs over 130 degrees Fahrenheit. (McGee, 2004)

Now that we’ve discussed the temperature range of flank steak when it’s done, let’s look at some of the best ways to prepare flank steak. We’ll start at the beginning of the process by deciding between marinating your flank steak or using a dry rub. 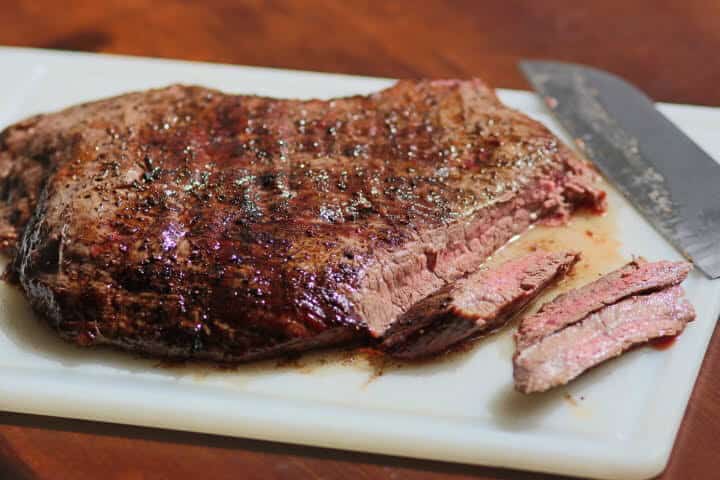 The pieces towards the end of your flank steak will be cooked more. Already showing nice pinkness, the slices will be pinker the closer to the center you get.

How to Marinate Flank Steak

Flank steak is a great cut for marinating. Contrary to what a lot of cooks believe, most marinades won’t really tenderize your meat beyond a few millimeters below the surface. This is also reiterated by Meathead Goldwyn over at Amazingribs.com.

I have found this to be true as well. However, this shouldn’t stop you from marinating your flank steak. There are a lot of great marinades out there for flank steak but you must be careful of some that might make your flank steak a little tougher.

It’s okay to use a marinade with acidic ingredients such as lemon or vinegar, just don’t marinate your flank too long. If you leave your flank in an acidic marinade for anything more than a few hours it will start to toughen the outside of the meat.

I generally find that 2 hours is plenty of time to impart flavor as the marinade isn’t going to penetrate too far anyway (see links above).

There are some fruits such as pineapple, papaya, and kiwi that have enzymes in them that will aid in the tenderizing of meat.

As to what depth in the meat that these enzymes work I am still researching and testing how well kiwi works in a marinade. I will definitely update any significant developments. This company seems to be onto something though.

This is one of my go-to marinades and it also works well on skirt steak.

This marinade is best when mixed in a blender or immersion blender stick, but you can do it by hand as well.

Place your flank in a large ziplock bag and dump the marinade in over it. Seal it, getting all the air out and massage the marinade into the meat. Pull it out after 30 minutes up to 2 hours but no longer.

Flank steak sliced across the grain into pieces on a wooden cutting board.

How to Cut Flank Steak

When you cut flank steak you want to slice against the grain with your knife at a 45-degree angle. It is harder to get that angle on the end of the flank steak when you start carving.

However, the further you get towards the middle of the flank steak you should definitely be able to get a nice angle for carving.

The reason you want to slice flank steak against the muscle grain at an angle is that it will break up the long fibrous meat into smaller, more tender pieces.

If you were to slice the flank steak with the grain you would be chewing on a piece of steak that still has a lot of connective tissue that has yet to break down because of the expedited cooking.

How to Cook Flank Steak on the Stovetop

Sometimes you don’t have time to marinate your flank and you just want it in your mouth already. Not a problem. Flank steak works well with dry rubs as well. 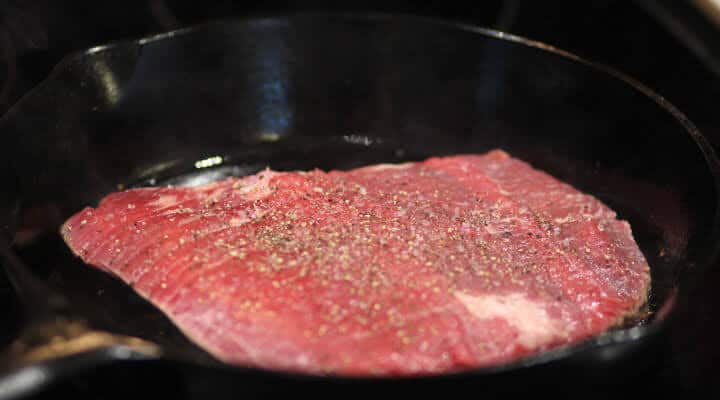 Sometimes salt and pepper are all you need. If you’re making tacos or fajitas throw some chili powder and cumin into that dry rub as well.

When you cook flank steak on the stovetop you want a nice heavy pan. A cast-iron pan will give you a nice crust when you sear the flank.

Start your pan out on medium to medium-high heat, keeping in mind cast iron retains a lot of heat. High heat will be a little too high for the flank.

Put your flank steak in the pan, if it’s too big, cut it in half and work in batches. Cook it for five minutes, resisting the temptation to move it around with your fork or tongs.

Flip it over and cook for another five minutes and pull your pan off the heat and check the internal temperature of the flank steak in a few spots. 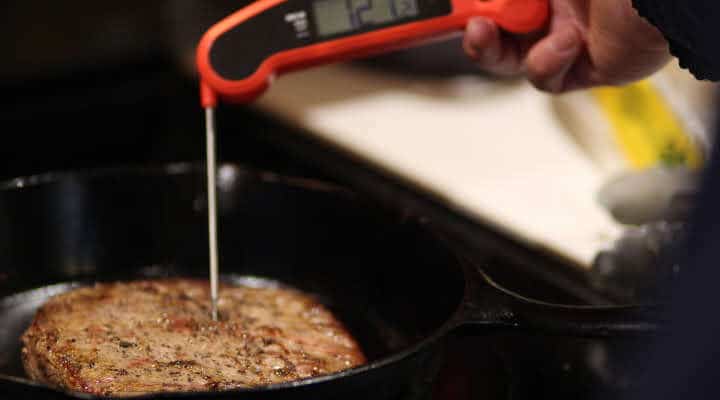 Flank steak reading 127 degrees on an instant-read meat thermometer. Looks like the cameraman cut off the picture, well, you’re fired.

Flank steaks are naturally uneven in thickness so be sure to check a few different spots. If you’ve reached the target area of 125 to 128 degrees Fahrenheit pull it off the stove and let it rest for a few minutes.

If you are still under put it back on the stove until it reaches the target temperature. Rest, then slice and serve!

How to Grill Flank Steak

Flank steaks are great on the grill. The technique involved is direct grilling over medium-high heat and then finishing them if necessary on a cooler part of the grill. This sear first, finish over indirect heat method also works great for tri tip roasts. 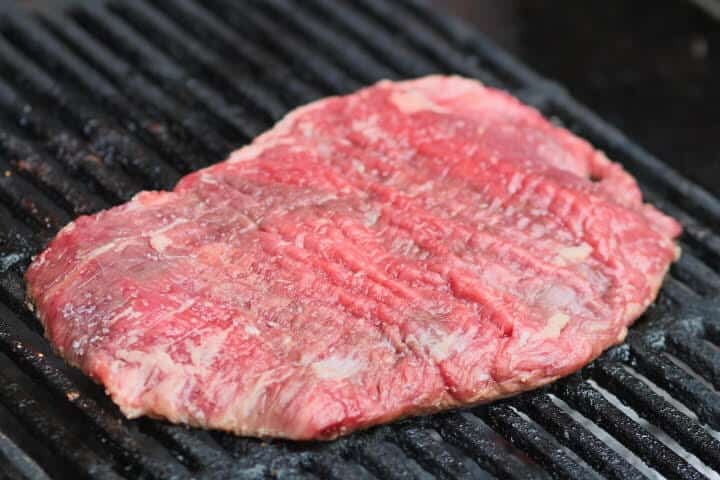 Flank steak just starting its journey on the grill.

Get your flank steak ready for the grill by wiping off any excess marinade or moisture from its surface. This will help the outside of the flank steak form a nice crust.

Preheat your propane grill to high for about ten minutes and then turn it down to medium-high.

If you are using charcoal, build a two-zone fire (a hot area and a cold area).

Place your flank steak on the hot part of the grill and cook for 5 minutes then flip it over. Cook another 5 minutes.

After you’ve grilled both sides for 5 minutes each pull the flank steak to the cooler part of the grill and check its temperature with an instant-read meat thermometer.

Continue to grill the flank steak on the cooler part of the grill over indirect heat until it reaches 125 to 128 degrees Fahrenheit. Pull it off the grill and let it rest for a few minutes. The carryover cooking will raise the temperature into the medium-rare range.

Slice the flank steak across the grain with your knife at a 45-degree angle. You’re ready to eat!

Flank steak is a great cut of beef that works well in a lot of different cuisines. You can use it for stir-fry, tacos, or as you’ve seen in this article, on its own.

Just remember to watch your marination and cooking time, as well as slicing the meat across the grain. If you get those steps right you should have a pretty tasty flank steak to devour. Thanks for reading!

McGee, Harold (2004).  On Food and Cooking: The Science and Lore of the Kitchen. New York, New York: Scribner.