What is the Temperature of Cooked Cod? 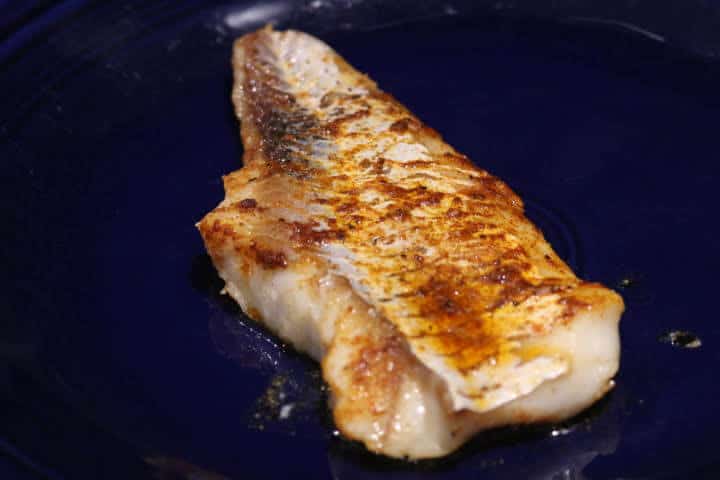 The fast answer to the temperature of cod when done depends on if it’s been frozen or not.

For cod that has been frozen you can safely serve it after it reaches 125 to 130 degrees Fahrenheit on an accurate meat thermometer .

A caveat to that recommendation, if the frozen cod is prepackaged in a marinade or sauce you might want to cook it to 145 degrees Fahrenheit to be sure the liquid, as well as the fish, is safe.

However, for fresh cod you might want to wait until 145 degrees Fahrenheit, the USDA  recommended temperature. 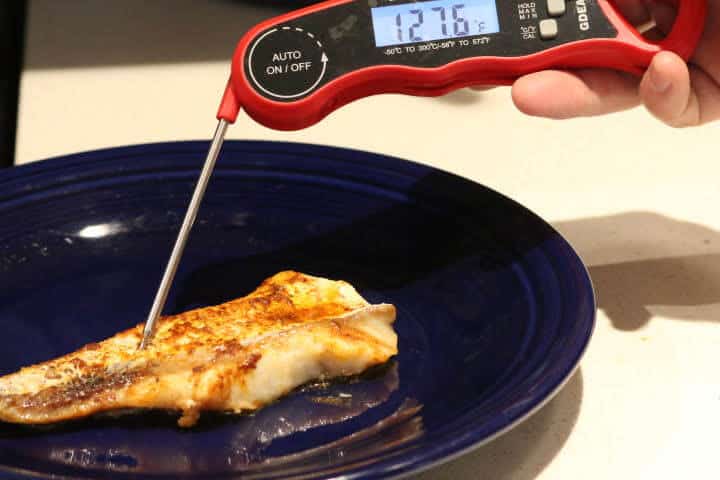 Frozen cod cooked to an internal temperature of 127 degrees Fahrenheit.

Here’s where it gets a little tricky. Although most cod sold is of the frozen or previously frozen variety, there are times when it is available fresh.  Alaska cod is available fresh in the fall and winter in the United States for example. So, what are the differences between frozen-at-sea cod and fresh cod and why does it matter for us in terms of the final cooking temperature?

A majority of the cod that is consumed is frozen on fishing vessels at sea.  The fish is harvested from the sea and then processed on the boat. The fish is then flash-frozen to a recommended storage temperature of -30 degrees Fahrenheit. The reason for this extreme temperature is explained in following information from an article by the Food and Agriculture Organization of the United Nations.

What are the benefits of cooking frozen cod?

Okay, so why freezing in the first place? Well, for one, fresh fish is often flown around the world to different locales for consumption. Jet fuel has a pretty big carbon footprint. Freezing fish allows it to travel in a slower, more cost-effective, earth-friendly manner on ships, or trains.

Another reason is the degradation of the fresh fish itself. An estimated 23 percent of fresh fish sold at supermarkets never even makes it out the door.

Furthermore, a collaborative study funded by the National Fish and Wildlife Foundation involving numerous agencies found that flash-frozen fish measured 4 times the quality of fresh fish from the supermarket when tested side by side.

That brings us to the topic of ……

The reason you might want to cook fresh cod to 145 degrees Fahrenheit is the presence of parasites such as cod worms. Now, to be clear, these aren’t as bad as they sound, even if they do indeed sound horrible. From the seafoodhealthfacts.org website :

All living organisms, including fish, can have parasites. Parasites are a natural occurrence, not contamination. They are as common in fish as insects are in fruits and vegetables. Parasites do not present a health concern in thoroughly cooked fish.

Parasites become a concern when consumers eat raw or lightly preserved fish such as sashimi, sushi, ceviche, and gravlax. When preparing these products, use commercially frozen fish. Alternatively, freeze the fish to an internal temperature of -4°F for at least 7 days to kill any parasites that may be present. Home freezers are usually between 0°F and 10°F and may not be cold enough to kill the parasites.

The health risk from parasites is far less than the risk from “unseen” illness causing bacteria which are present in almost all foods.

What is the Best Temperature to Bake Cod?

Cod fillets cook extremely fast. The general consensus among food bloggers and professional chefs is to cook cod in a 400-degree Fahrenheit oven. Depending on the size, cod fillets will take 10 minutes to cook and you will want to start checking the temperature at around 8 minutes. Pull the cod fillets when they reach 120 degrees Fahrenheit. The carryover heat will raise the internal temperature by 5 to 10 degrees.

​When cooking cod, if you don’t know if it’s been previously frozen it’s probably best to cook it till it reaches 145 degrees Fahrenheit on a trusty instant read meat thermometer   . If it has been frozen up to the standards mentioned previously you will be fine to cook cod to 125 degrees.