At What Temperature is a Bratwurst Done? 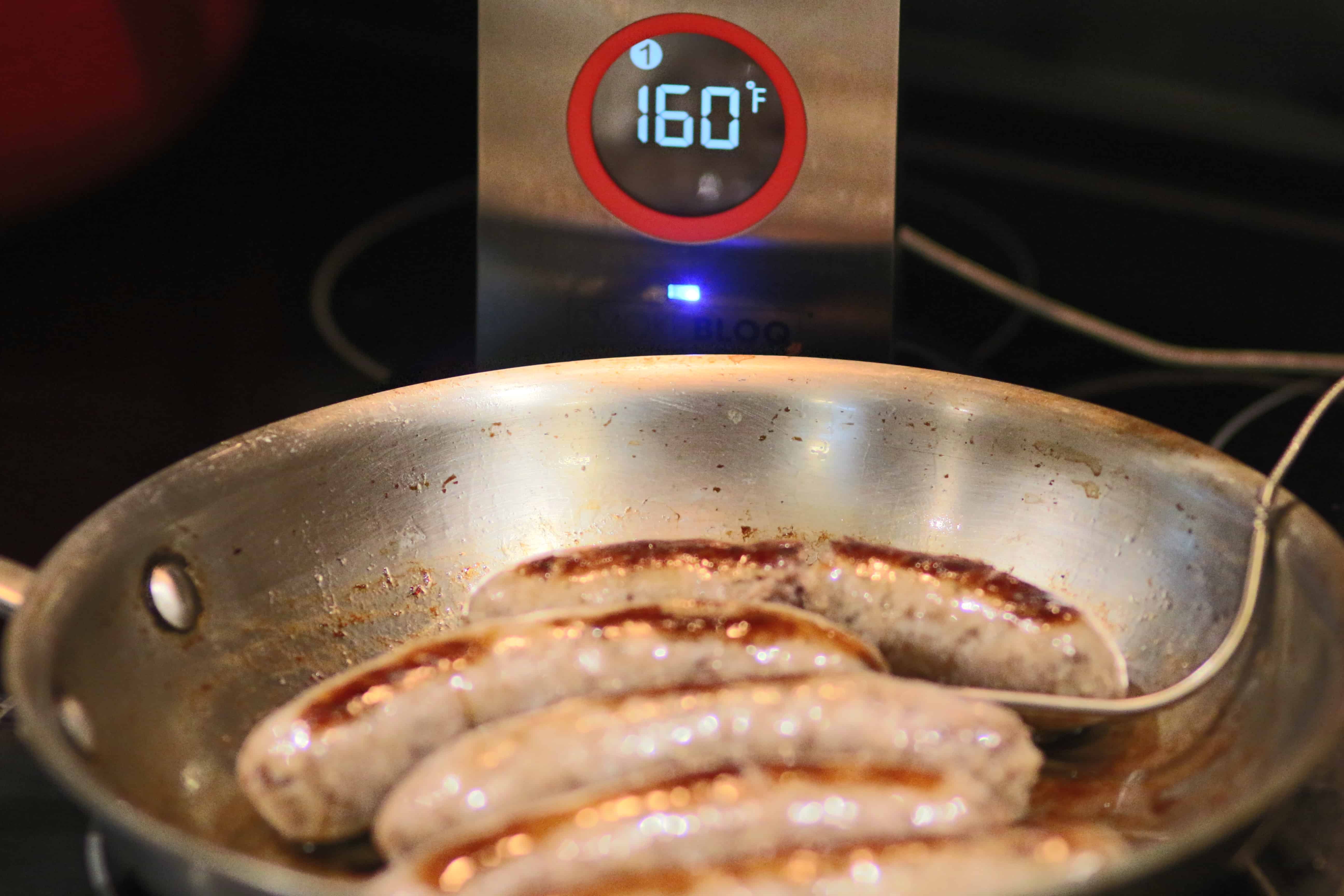 The hardest part about cooking bratwurst is cooking them to the proper temperature without burning the outside to a crisp. Bratwurst is a ground pork sausage with high-fat content. Because of this, they are tricky to cook. When cooked the right way, a bratwurst sausage will be juicy on the inside with a nicely browned exterior.

How To Install A Grill Thermometer? 7 Superb Guides To Do It

Here’s our review of the best digital meat thermometers. 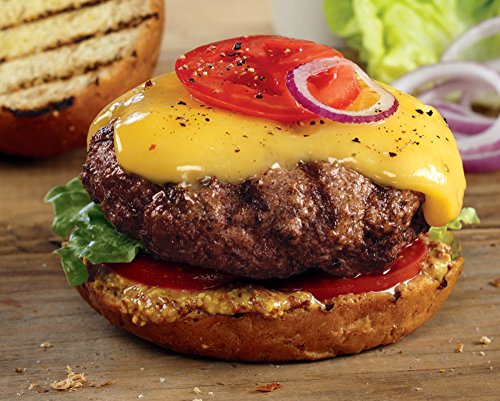 What Is a Bratwurst Made Of?

To understand why a bratwurst sausage can be difficult to cook you need to understand what ingredients make up a bratwurst. Bratwurst sausage originated in what is now known as Germany as early as the 15th century. There are many derivations of the sausage, some using a mixture of beef, pork, and veal. However, the version that is sold in supermarkets today is mainly made from ground pork.

According to Johnsonville, the largest producer of bratwurst in the United States, a typical bratwurst will contain all ground pork with a 32% fat content. No wonder why they taste so good! It is because of this high-fat content, coupled with the fact it is in a casing that shrinks when heated, that bratwurst is difficult to cook. That is unless you know how to cook them properly. The solution is really easy. We’re going to show you.

The Internal Temperature for Bratwurst When Done 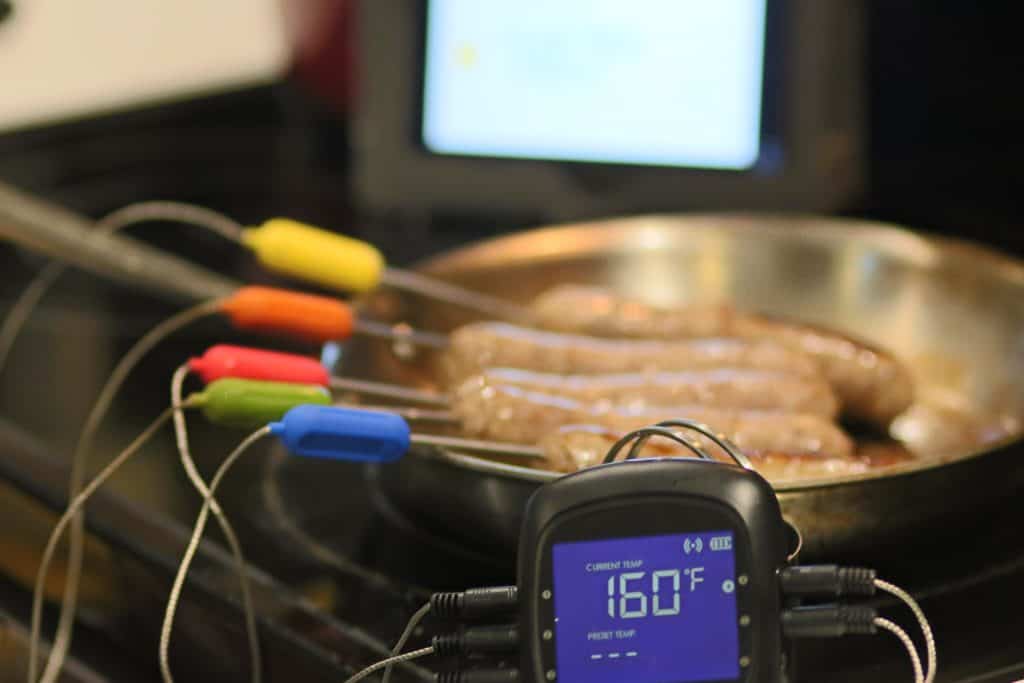 According to the USDA, sausages made with ground pork like bratwurst are safe to eat after they reach an internal temperature of 160 degrees Fahrenheit on a meat thermometer.

There are many ways to achieve an internal brat temperature of 160°F, but only a few will result in a truly delicious sausage.

How many times have you been at a summer party and the self-professed grill-master hands you a shriveled up sausage that resembles a dried pepperoni stick? Not fun.

Generally, where most amateur pit-masters go wrong when cooking sausages is that they cook them over high direct heat. This leads to the sausage casing bursting open, spilling all the delicious goodness. Let’s look at the best way to cook bratwurst.

Grilling Bratwurst on a Propane or Charcoal Grill

There is nothing more primitive than cooking a piece of meat over an open fire. This archaic form of cookery speaks to the inner animals in us all. That being said, you need to shelve this desire when cooking sausages on the grill.

When you place a sausage on a hot grill, the meat and the casing will start to contract. This will result in the sausage casing bursting open. You’ll then be left with a shriveled-up sausage.

If you are doing bratwurst on the grill, find an aluminum foil pan. If you don’t have one, make one MacGyver-style out of aluminum foil. Next, put your brats in the pan and cover them halfway with liquid.

Beer works great, you could also use a mixture of water and chicken or vegetable broth, nothing too salty or assertive tasting. You can also include any toppings you want with your brats in the pan. Peppers and onions are classic pairings.

On a Charcoal Grill

If you are using a charcoal grill, build a two-zone fire, one side hot with 75% of the coals and the cooler side with the remainder. Cook your brats in the pan on the cooler side, lid covered, for about 15-20 minutes or until they read 150 degrees Fahrenheit on an instant-read meat thermometer. You can then grill the brats on the hot side for a minute or two to give them some nice grill marks and bring them to an internal brat temp of 160 degrees Fahrenheit.

On a Propane Grill

Same theory as above, turn one side of your grill to medium-high with the other side on low. Place your foil pan with bratwursts, poaching liquid and whatever else on the cooler side of the grill and cover the lid. Start checking them around 15 minutes. When they reach 150 degrees Fahrenheit they’re ready for a quick browning for 1 to 2 minutes on the hotter side of the grill. They should reach the desired internal bratwurst temperature of 160 degrees Fahrenheit after the last blast of heat.

Poaching the bratwurst in liquid allows for the meat inside the sausage to cook evenly rather than the outside getting the majority of the heat, causing major temperature imbalances in the sausage. You could try cooking the bratwurst over direct moderate heat. However, this is a delicate process and often you end up with a shriveled sausage when you pull it off the grill.

Another benefit to poaching bratwurst is that you can hold them in the pan on the cool side away from heat. This is great for parties with a lot of guests. You can simply grill up the bratwurst upon request on the hot side of the grill. This will allow you to enjoy the party as well, not having to tend to a constant fire with meat.

Cooking Bratwurst on the Stovetop 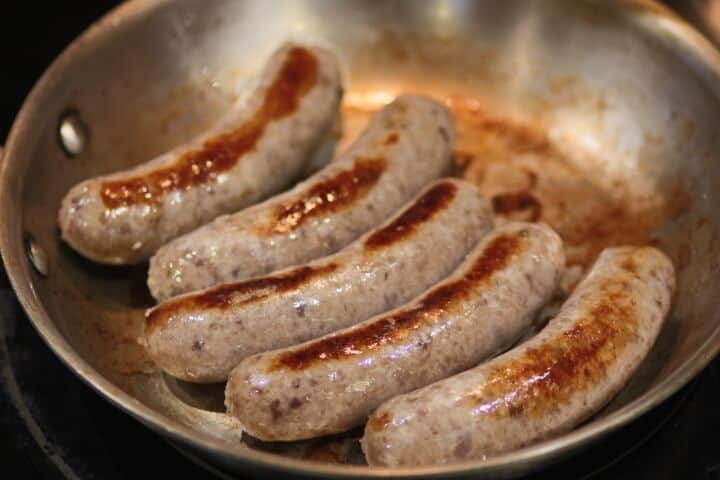 Bratwurst on the stovetop

When cooking bratwurst in a skillet on the stove you will employ a hybrid method. This method is part poaching/steaming and then browning them, all in the same pan.

Start the brats in a cold pan with about ½ inch of water. Cover the pan with a lid. Turn the burner to medium-low if using an electric stovetop. Also, if you are using a cast iron or metal pan, or cooking on a gas stove, you might want to turn the burner to low.

Around 12 minutes most of the water should be absorbed and the brats should register around 145 to 150 degrees Fahrenheit.

Then, simply sear them in the pan until they have a nice brown exterior. They should reach 160 degrees Fahrenheit after cooking. 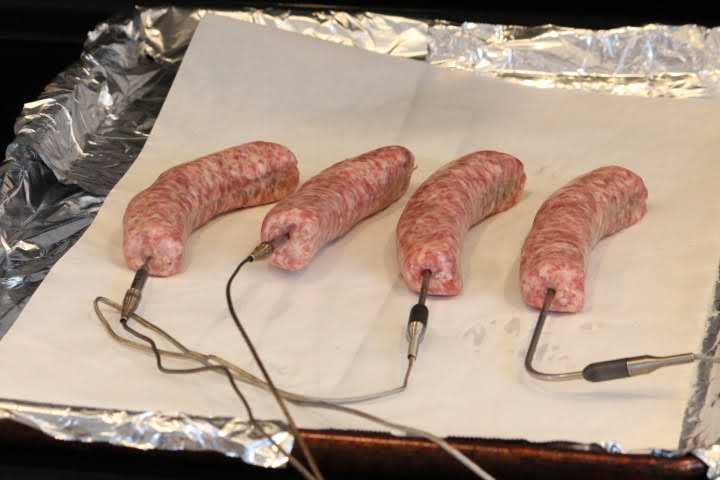 Cooking Bratwurst in the Oven

An oven is your best bet if you have a lot of bratwurst sausages to cook and the weather outside isn’t great for grilling. Preheat your oven to 350°F.

Line a baking sheet pan with aluminum foil or parchment paper, place the sausages on the sheet pan, and put them in the oven when it’s heated to 350°F.

At the 10 minute mark, flip the bratwurst over and continue to cook another 5 minutes. 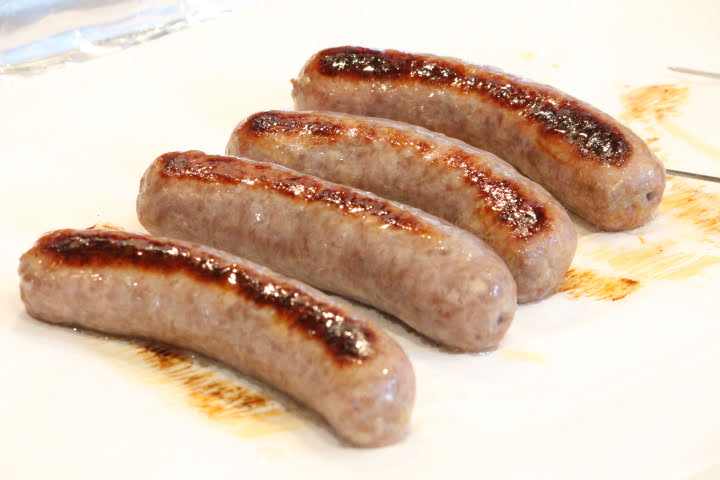 How to Insert a Meat Thermometer into Bratwurst Sausage

What is the best way to insert a meat thermometer into bratwurst sausage?

We can all agree that the thermal center of a bratwurst will be nearest the middle of the sausage.

One way to check the internal temperature of the sausage is to insert a meat thermometer in one of the ends, inserting it deeper towards the middle. 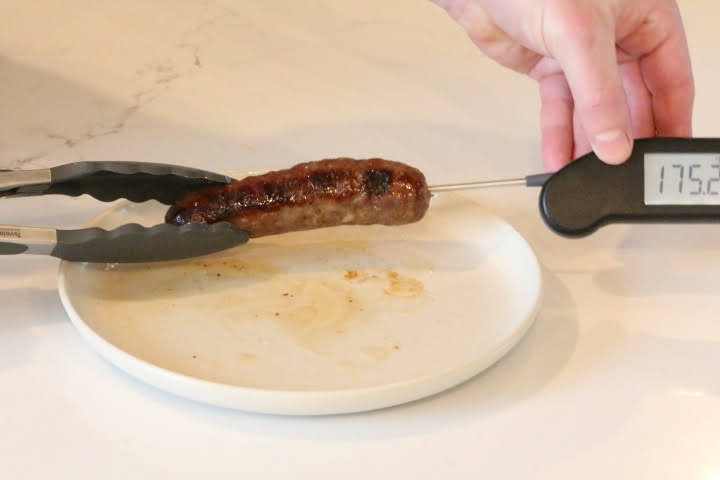 Inserting an instant-read thermometer probe straight into one end of a bratwurst.

This method works okay, but inserting a probe straight into the end is only measuring the temperature on a single plane.

The best way to insert a meat thermometer into a sausage is to insert the probe at a 30° angle starting near the end of the sausage and aiming for the middle of the sausage. 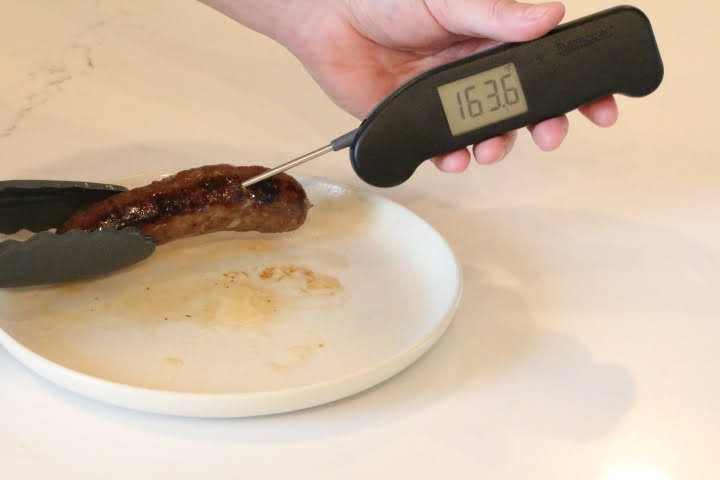 Insert the thermometer near the end on the top and angle it down toward the middle of the sausage.

That way the temperature probe is going through the different temperature gradients or planes of the sausage rather than just one.

This will give you a more accurate reading of the entire sausage rather than the spot on the end that you decided was the middle.

But what about the oven temperature probes that you leave in the bratwurst while they cook? 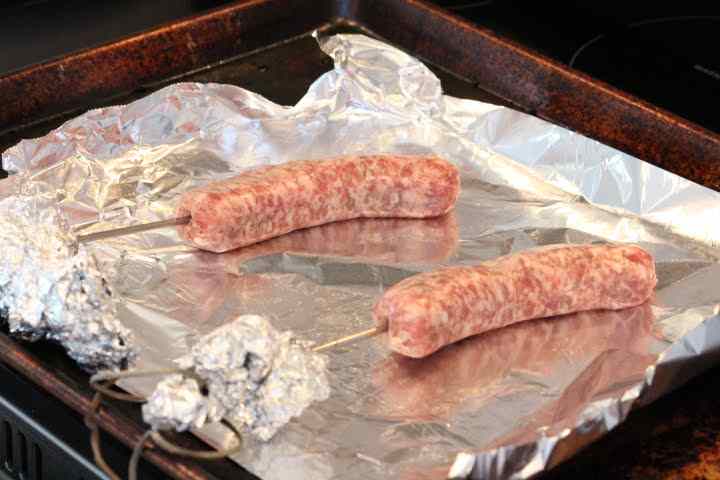 I will still double-check their internal temperatures with my instant-read thermometer using the angled approach I described above once they’re removed from the oven.

Cooking bratwurst doesn’t have to be intimidating as long as you remember the basic steps in this article. Poach them first in a simmering liquid of your choosing, beer or a mild broth works best. Then when the internal temp of the bratwurst reaches 150 degrees Fahrenheit, it’s ready for a final searing over direct heat on all sides that will bring its final temperature to the desired 160 degrees Fahrenheit. And finally, we can’t stress enough how much easier cooking is when you have a trusty digital meat thermometer.  Good luck and happy cooking!