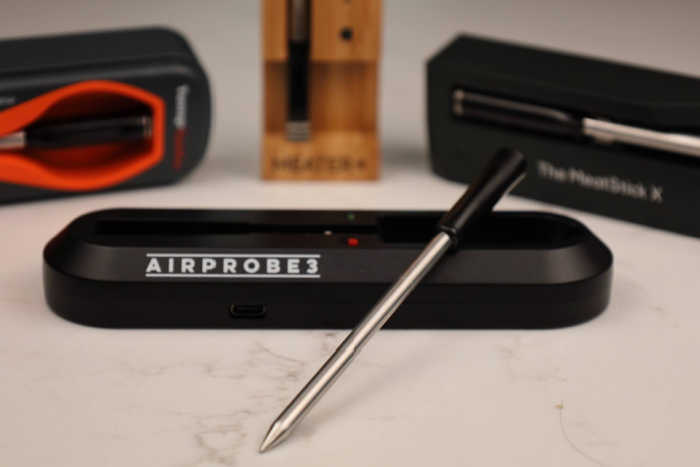 The Tappecue AirProbe3, as the name suggests, is the third generation of wireless meat probes from Tappecue.

The AirProbe3 is a dual-sensor, wireless smart meat thermometer that transmits food and cooking temperature data to your mobile device via Bluetooth.

I’ve reviewed the top wireless meat probe thermometers to determine which one has the most value for your money. 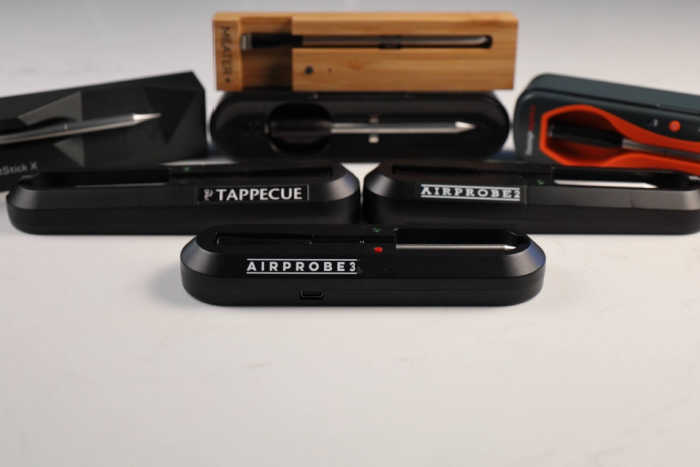 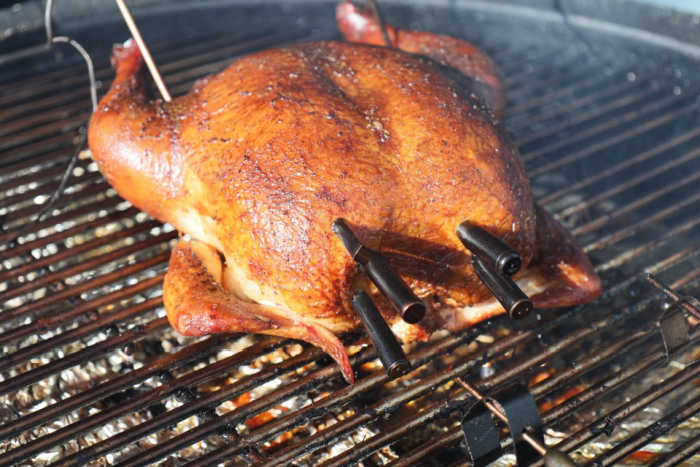 The MEATER, MeatStick X, Tappecue AirProbe3, Yummly, and ThermoPro TempSpike wireless meat probes are inserted into a whole chicken on a smoker.

In this review, I will answer that as well as examine the features, usability, accuracy, durability, and price to see if the AirProbe3 is worth your time and money.

Best Feature- Its versatility. With no internal battery and IP67 waterproof protection, the AirProbe3 can be used in many cooking environments including pressure cookers and sous vide applications.

Worst Feature- There is no wireless signal booster in the charger like other models.

Thermomeat Verdict- A consistently high performer in both food temperature and cooking temperature tests, the AirProbe3 is one of the better wireless meat probe thermometers, if not the best.

The AirProbe3 is the third generation of truly wireless meat probe thermometers developed and brought to market by Tappecue.

Tappecue is the only company that I know of that has released multiple updated versions of wireless meat probes. 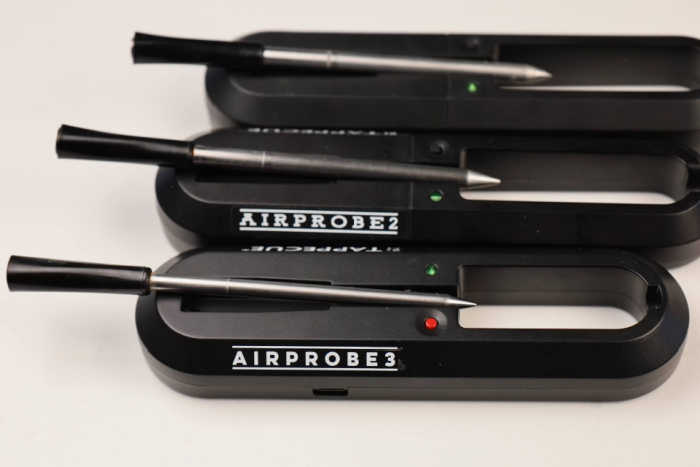 The AirProbe3 is noticeably smaller in diameter than the prior two models. This is a great upgrade and not only does the AirProbe3 leave a smaller puncture in your meat, but it is also more temperature sensitive due to its smaller size. 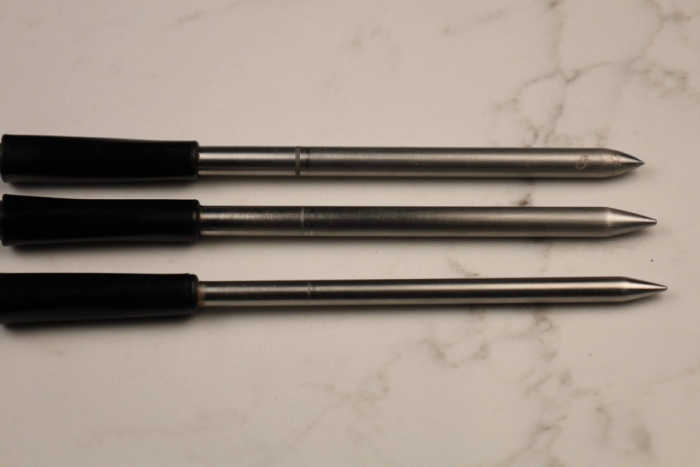 The AirProbe3 on the bottom will leave less damage behind.

I’ve witnessed this faster response time of the AirProbe3 in head-to-head temperature tests versus the AirProbe2.

What else is different? The battery charging dock now has a USB port to charge your AirProbe as well as a AAA battery compartment option.

This makes it just one of two top wireless meat probe models to feature this charging option. (The ThermoPro TempSpike is the other.)

Perhaps the biggest upgrade is the 48-hour battery life of the AirProbe3 on a full charge.

This addressed the issue with the 4 to 10 hours of battery life of the AirProbe2. You no longer have to worry about pulling your AirProbe out and recharging it during a long brisket cook.

What else does the AirProbe3 feature? 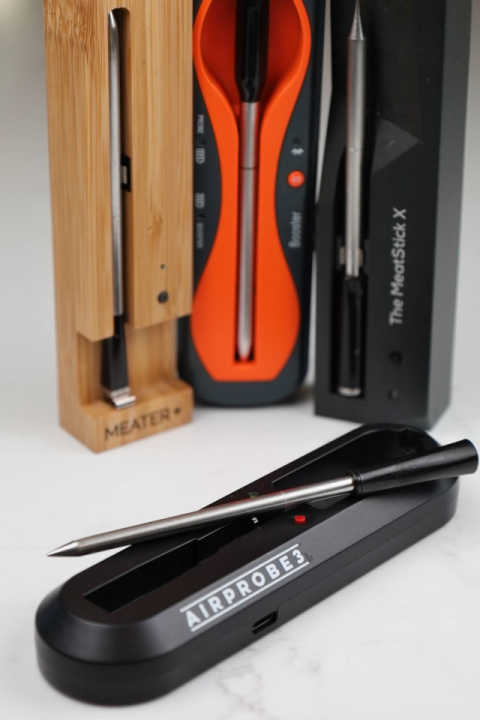 Here are all of the important specifications and features of the Tappecue AirProbe3.

The AirProbe3 can communicate directly with your smartphone via the Tappecue mobile app using a Bluetooth signal.

Once connected, the AirProbe will also start a cloud session via WiFi from which you can monitor your cooks anywhere you have an internet connection.

To begin, download the mobile app from the Apple App store or the Google Play store, remove your charged AirProbe from the charger and then press the AirProbe Direct option in the app.

You will need to make sure you’re within range of the AirProbe when you initially pair it with the mobile app.

The AirProbe should automatically connect to the mobile app, and a you will see a screen that displays both the food temperature and chamber temperature readings of the AirProbe. 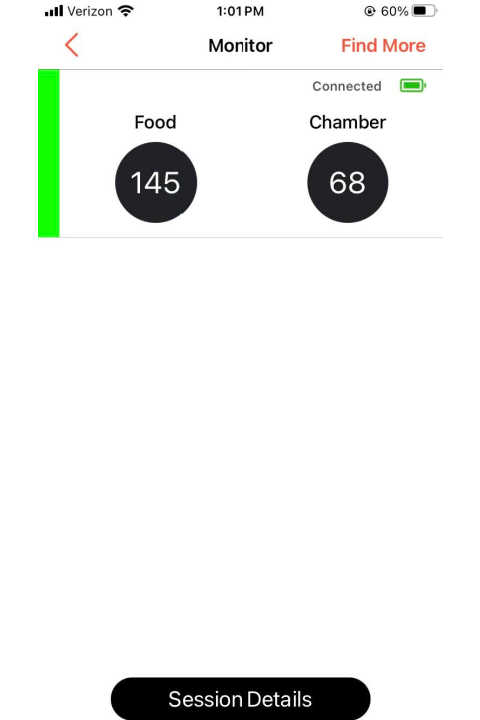 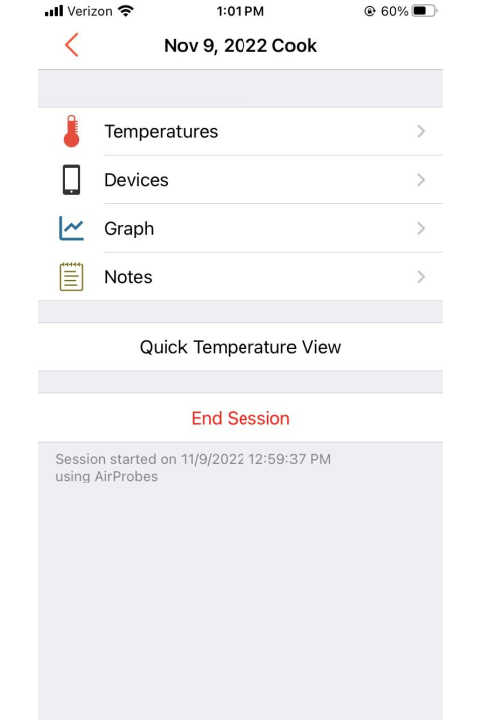 You have multiple temperature viewing options in the app. There’s the first screen we’ve already talked about and there is also a quick temperature view screen, as well as a temperature graph screen for each probe where you can set temperature alerts as well. 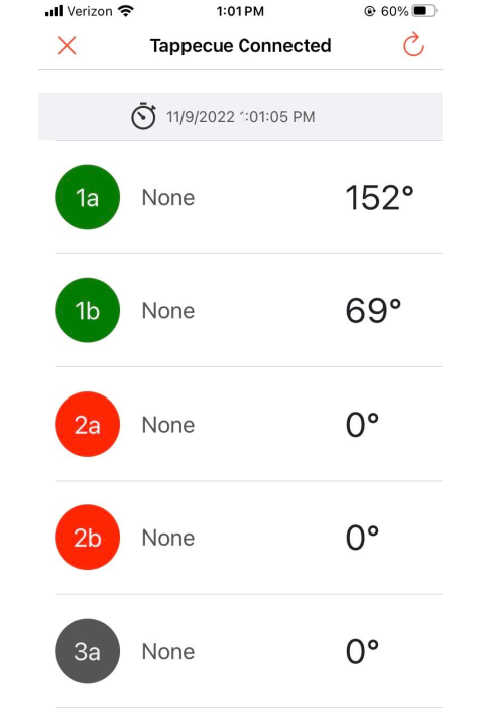 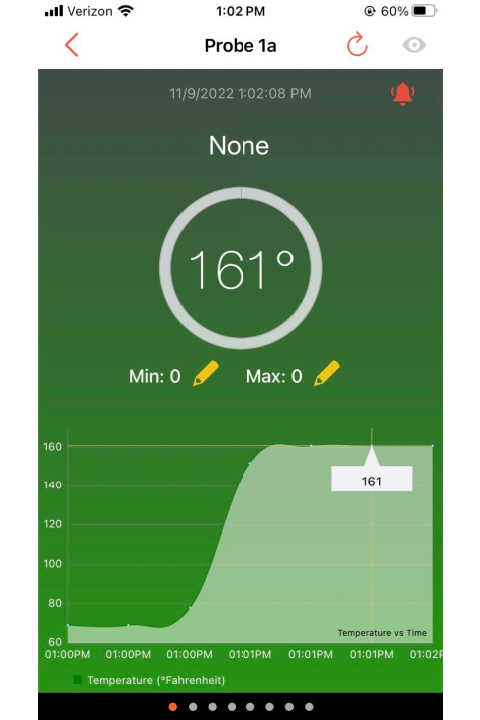 You can also view both the food temperature and cooking temperature readings on the same graph by pressing the graph button on the main screen.

The Bluetooth range and connectivity of the AirProbe3 are much improved over prior models.

While the Bluetooth range still isn’t amazing by any means, it is an upgrade.

Whereas it was difficult to connect my phone in the kitchen to the AirProbe2 while in a Kamado cooker outside, the AirProbe3 is able to achieve this easily.

Yes, the total distance is about 15 feet, but maintaining a signal through a wall and a thick ceramic cooker is still pretty decent.

The AirProbe3 also maintained a consistent wireless connection between my phone 40 feet away in an upstairs bedroom and my kitchen oven downstairs.

This brings me to one of my gripes with the AirProbe3. There still isn’t a signal booster in the charger.

This might be nitpicking considering all of the other upgrades that I’ve mentioned.

All of the AirProbe’s direct competitors; the MEATER Plus, the MeatStick X, the Yummly Smart Thermometer, and the ThermoPro TempSpike have signal boosters in their chargers.

With a signal booster, you can expect a decent amount of extra distance added to your wireless range.

It is also very helpful in situations where the probe is inside a thick steel or ceramic cooker.

However, one of the ways to combat this signal loss is by using the WiFi option inherent in the AirProbe system.

How is it inherent? The Tappecue mobile app will start a Cloud session for every cooking session you start.

You can access the AirProbe via WiFi if you have two smartphones or tablets at your disposal. I use my ten-year-old iPad to act as the WiFi liaison.

To access your AirProbe via WiFi you will need to set up your Tappecue account on both devices.

When you start a cooking session in the Tappecue mobile app, it also creates a cloud session as well.

This session is then viewable from any mobile device that is logged into your Tappecue account from anywhere in the world that has an internet signal. 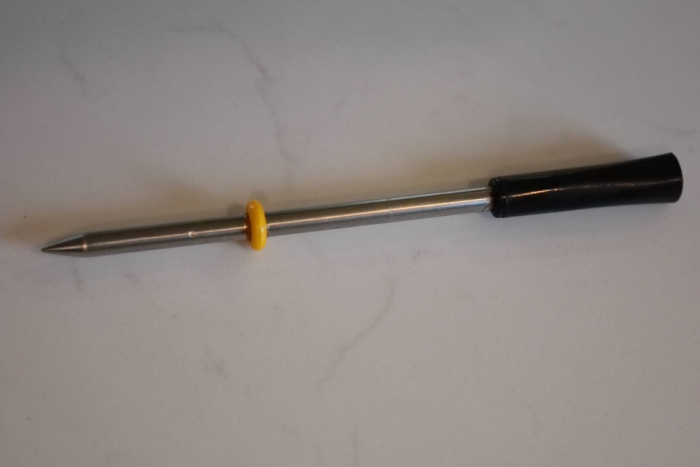 The yellow ring is where the internal food temperature sensor is located. 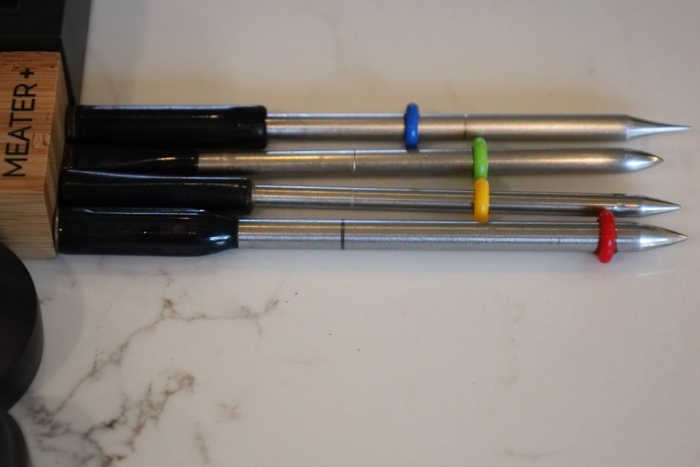 (From the top) The sensor placements of the MeatStick X, MEATER Plus, Tappecue AirProbe3, and ThermoPro TempSpike.

You want to get as close as possible to the thermal center when you are monitoring the internal temperature of a piece of meat.

It is generally easier to hit that location with the tip of your thermometer than it is to gauge how much further you need to insert or not insert your probe due to sensor placement.

As you can see in the picture above, the food temperature sensor of the AirProbe3 is in the same vicinity as that of the MEATER Plus, around 1.5 inches from the tip.

The ThermoPro TempSpike (the probe with the red ring) has its food temperature sensor closest to its tip, making it easier to hit the thermal center.

This doesn’t necessarily make the other thermometers less accurate, but it does make it more difficult to measure the true thermal center of your meat during cooks. 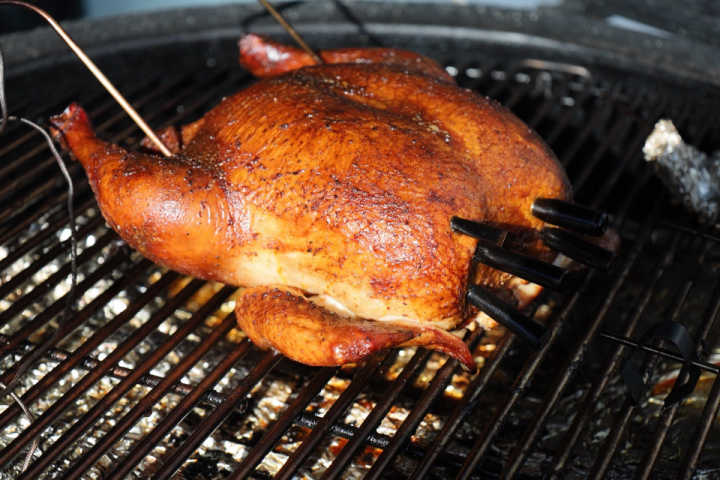 There are many variables that come into play when testing multiple meat probes together during a cook.

Some of these variables include where you place your probe in the meat and how close that area is to your heat source.

Accounting for these variables, the AirProbe3 performed well alongside other wireless meat probes over multiple cooks in terms of internal food temperature accuracy. 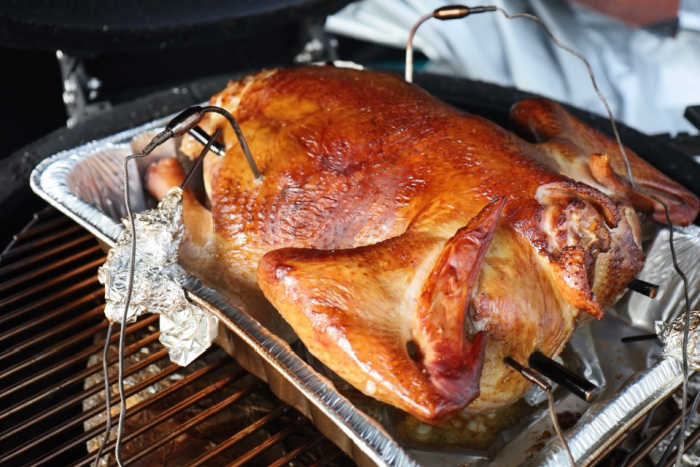 If I had to give the AirProbe3 a ranking for its internal temperature accuracy, it would probably be second place behind the ThermoPro TempSpike.

Although its sensor is in a similar location to that of the MEATER Plus, it proved to be more responsive to changes in temperature.

What about the ambient cooking temperature sensor?

I would place the ambient temperature sensor of the AirProbe3 solidly in second place out of all of the wireless meat probe thermometers I’ve tested.

I rank the MeatStick X as the best in accuracy when it comes to measuring ambient cooking temperature. 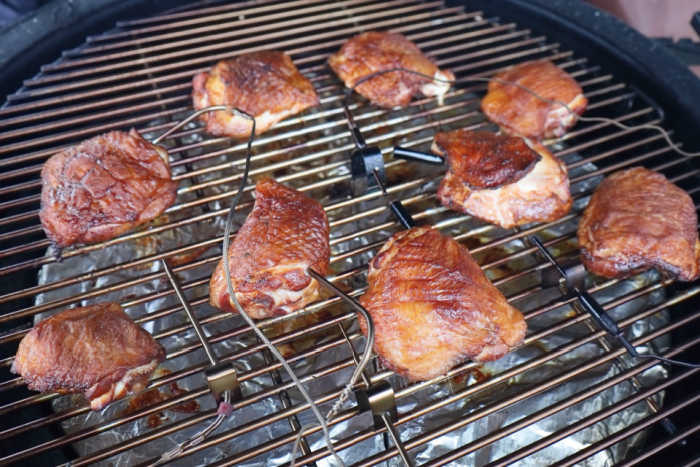 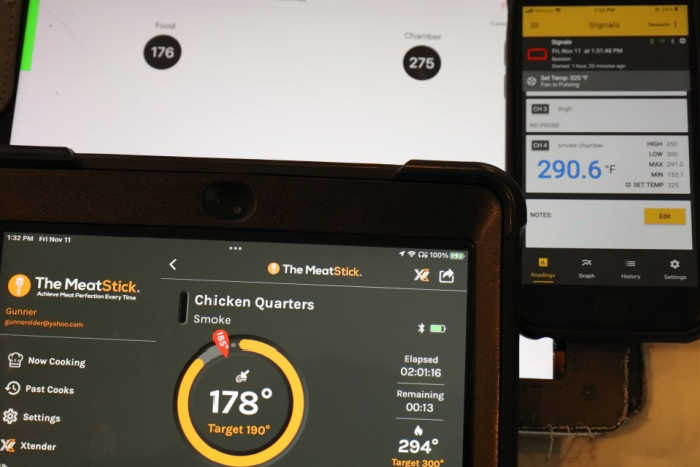 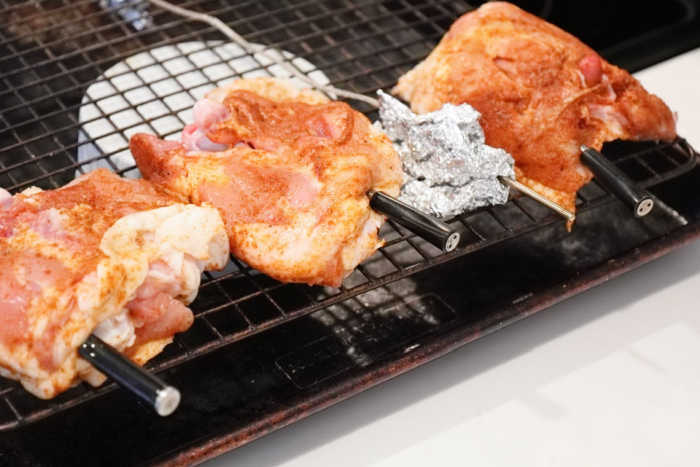 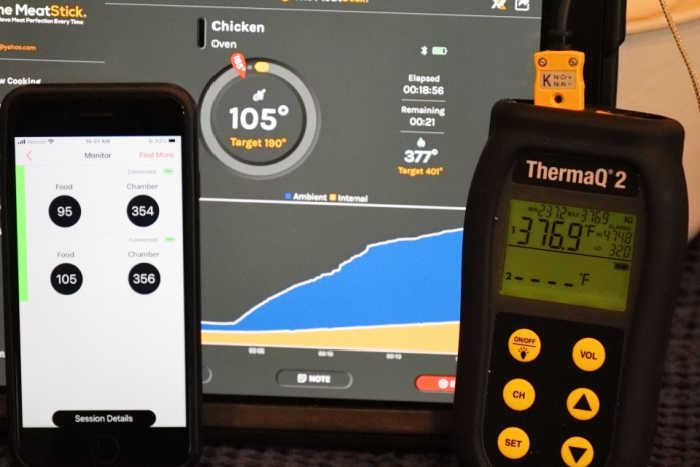 Where does this leave the AirProbe3 in terms of the overall accuracy of both its sensors?

The Tappecue AirProbe is the only wireless meat probe that doesn’t have an internal battery that you have to worry about.

It is also rated dishwasher safe and has an IP67 waterproof rating.

This durability allows you to use it in multiple cooking applications including pressure cookers, air fryers, sous vide, etc.

I’ve been using the prior AirProbe model, the AirProbe2,  for over a year and a half with no problems whatsoever.

I rate the AirProbe3 as the most durable option for a wireless meat probe because of these features.

The AirProbe3 did take a jump in price from the previous models. The current price at the time of this review is $129.

How does this compare to the competition?

Although I really like the AirProbe 3, I’m not sure the elevated price tag is warranted considering it doesn’t include a wireless signal booster like the MEATER, MeatStick, and TempSpike.

The AirProbe3 has gone on sale recently for $99, and I think this is a fair price for it. I am okay recommending it at this price.

At its current price of $129, I will need to see a better Bluetooth signal as this is the one area where its lower-priced competitors are superior.

The Tappecue AirProbe3 was the most consistent performer for both of its temperature sensors in all of my cooking and temperature tests.

Other models do well in measuring cooking temperatures but not so much when it comes to measuring food temperatures. (The MeatStick X)

The AirProbe3 is pretty good at measuring both cooking and food temperatures.

When you couple this with its 48-hour battery life, IP67 waterproof construction, cooking versatility, and nice mobile app with WiFi capabilities, the AirProbe3 has a lot to offer.

The one drawback for me is the lack of a Bluetooth signal booster in the charger. However, this is easily solved if you have a spare tablet or phone to use as a WiFi connection.

Although the current price is a little steep for me, I still rate the AirProbe3 a buy if you’re in the market for a wireless meat probe thermometer.