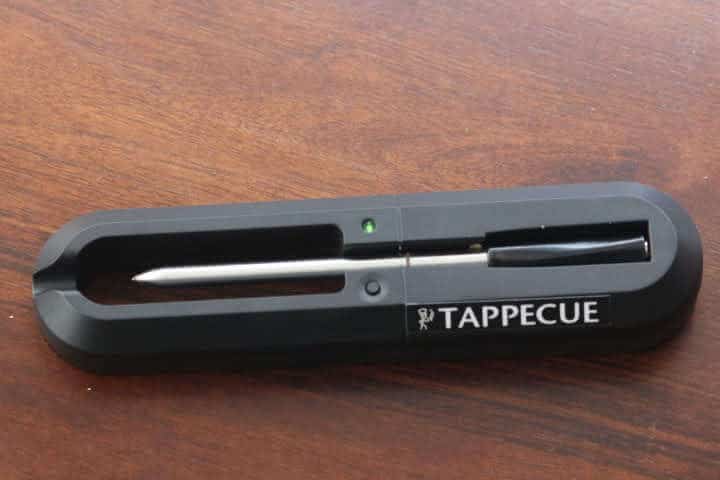 It is a nice addition to the Touch thermometer’s growing list of optional attachments like their Cruise Control system.

It is great when you can add value to an existing piece of equipment and that is why I was excited to hear that the Touch now has wireless probe capabilities.

Check out the review of the updated Tappecue AirProbe2 Wireless Meat Probe. 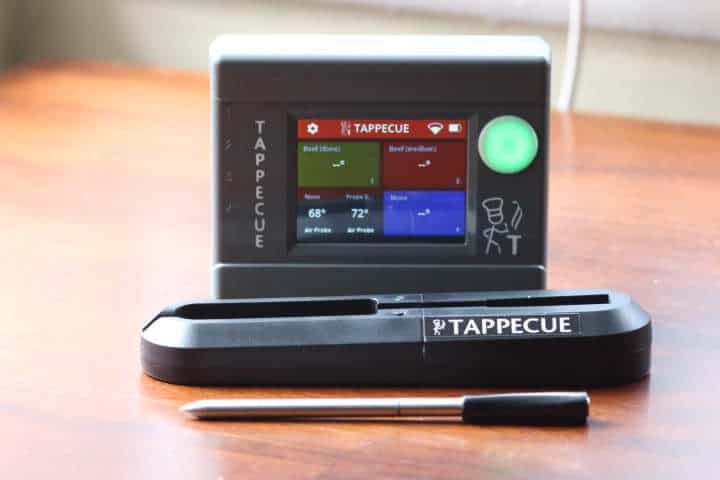 The Tappecue AirProbe connects to the Tappecue Touch WiFi meat thermometer. Notice the split-screen in section 3 for ambient and food temperatures.

The AirProbe connects to the Tappecue Touch via Bluetooth and will work for up to 10 hours before needing a charge. It only takes 5 minutes to charge the AirProbe.

Update: Now the Tappecue AirProbe works without the Tappecue Touch, just connect it to any smart device through its cloud-based app. 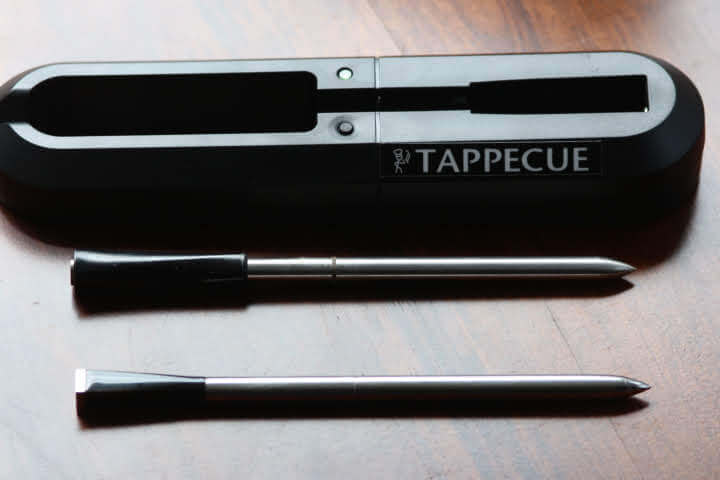 The Tappecue AirProbe comes with a charger that is powered by one AAA battery (not included). To check if the AirProbe is charged you simply press the button on the charger and if the light turns green you’re good to go.

My AirProbe came already charged which is nice. The charger also has a magnet on the back in case you want to attach it to your grill or something metal.

Unlike the MEATER Plus, the charger doesn’t double as the Bluetooth bridge for your WiFi or mobile device. It’s just a charger.

The AirProbe is BlueTooth 4.2 compatible while the MEATER Plus is Bluetooth 4.0. The AirProbe is rated waterproof Grade IP67, however, I would be leery about submerging the whole probe with the handle in liquid. 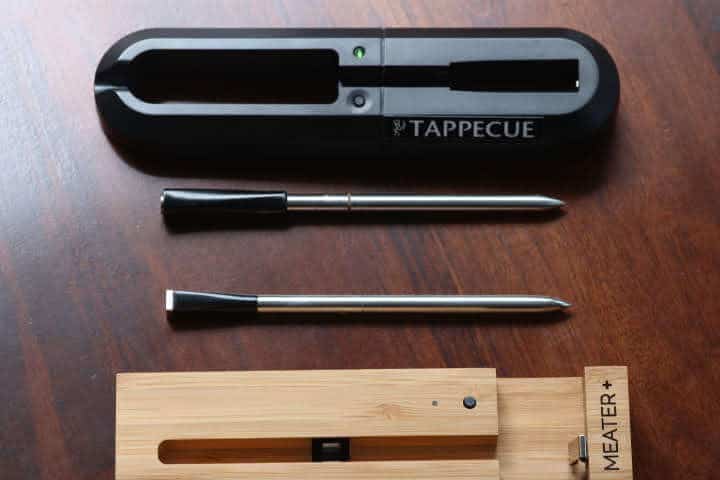 A Note on Fairness

Before I go too far in this review I want to remind the reader of a few things. Firstly, the AirTouch just debuted and is still in a beta-testing mode so this review might be a little premature.

Another thing I want to mention is that although the comparison of the AirProbe to the MEATER Plus might seem like a logical thing, it’s not necessarily fair to either thermometer.

Well, for starters, the AirProbe is an addition to an existing thermometer (the Touch) and can’t function without it.

Another thing is the price. If you added the AirProbe and the Touch together they are double the price of the MEATER Plus.

Lastly, the MEATER Plus only has to deal with itself in terms of operation while the AirProbe needs to integrate into an existing system. This makes the AirProbe a little more tedious to operate in terms of connecting and co-existing in the Touch’s system.

Okay, with those caveats in mind, let’s move on to the features of the AirProbe.

Here are all the important features for the AirProbe;

The probe is rated waterproof IP67 and 5 inches long overall with 3.5 inches of it being the stainless steel end that you put in food. The black tip where the sensor resides is 1.5 inches long. The length overall is the same as the MEATER. The sensor on the Airprobe is notably larger than the MEATER’s sensor.

The charger that comes with the AirProbe runs on one, AAA battery. You can charge the AirProbe in just five minutes. The charge will last for 10 hours.

The AirProbe has a food measuring temperature range of 0 to 212 degrees Fahrenheit/ 0 to 100 degrees Celsius.

The Accuracy of the AirProbe

To check the accuracy of the AirProbe’s temperature sensors I ran a test of it and the MEATER Plus thermometer in my oven. The Thermoworks Signals WiFi thermometer acted as the third impartial third thermometer monitoring the ambient oven temperature. 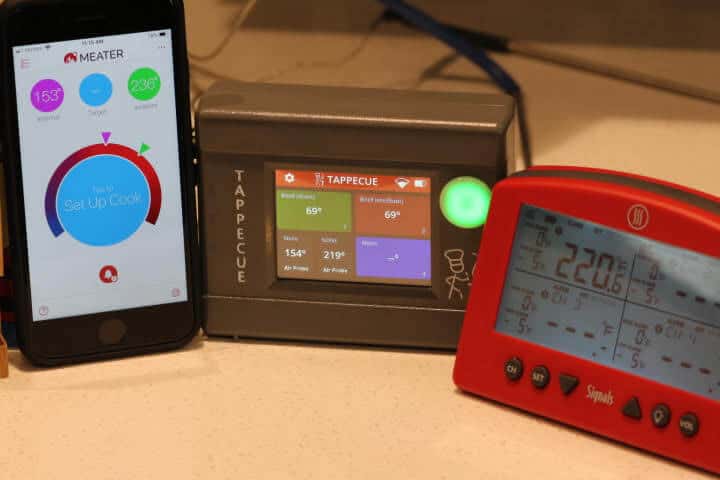 To run the test, I inserted the AirProbe and the MEATER Plus probes into two russet potatoes (hey, it’s what I had on hand). Next, I put them into the oven, which was set at 225 degrees Fahrenheit.

The AirProbe and the MEATER probes measured the internal temperatures of the potatoes similarly during the entire test.

It is the ambient sensor that differed between the two, with the MEATER measuring the oven temperature between 10 to 17 degrees higher.

Keep in mind this is just one test and it would be presumptuous to draw any definitive conclusions from this. I will say that the AirProbe’s ambient temperature sensor tracked closer to the Thermoworks Signals’ sensor during the test.

I would rate the AirProbe as pretty accurate in terms of its main sensor. The ambient sensor is accurate but I would like to run more tests under different conditions (in a smoker, on the rotisserie, etc.).

To connect the AirProbe to the Touch’s mobile app you need to specify it as a dual-sensor probe in the app settings. The mobile app itself is easy to use and has a ton of customizable features with graphing export capabilities. I go into more depth on the Tappecue Touch’s mobile app in my review. (see link at the top) 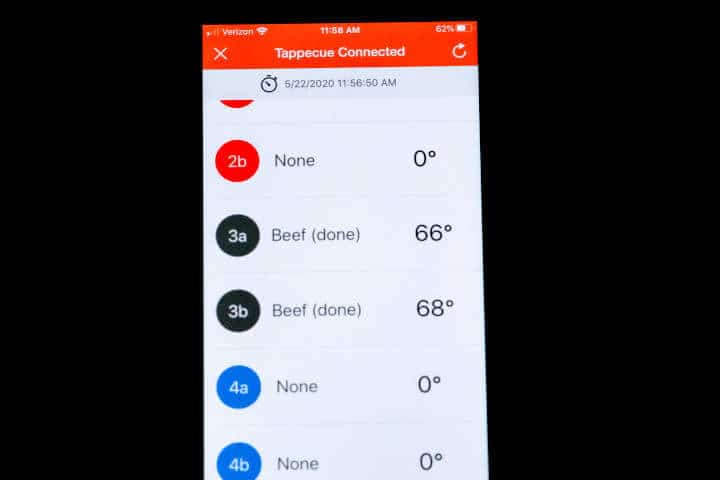 The Wireless Range of the AirProbe

In order for the AirProbe to function it needs to be within the range of the Tappecue Touch. To test the range, I put the AirProbe in my smoker on my back patio and proceeded to walk away from it with the Touch in my hands.

The signal generally would cut out after ten feet. That is the distance the MEATER cuts out as well when you move its signal repeater away from it.

This isn’t a huge deal as it is the signal range connectivity to your mobile device that you need to be concerned with.

If the Tappecue Touch is within range of your WiFi then you should have a limitless range if your mobile device is connected to the internet.

You can use the Touch in “Offline” mode as well, however, there is no dual-sensor probe functionality so the AirProbe will only display the main sensor’s temperature. 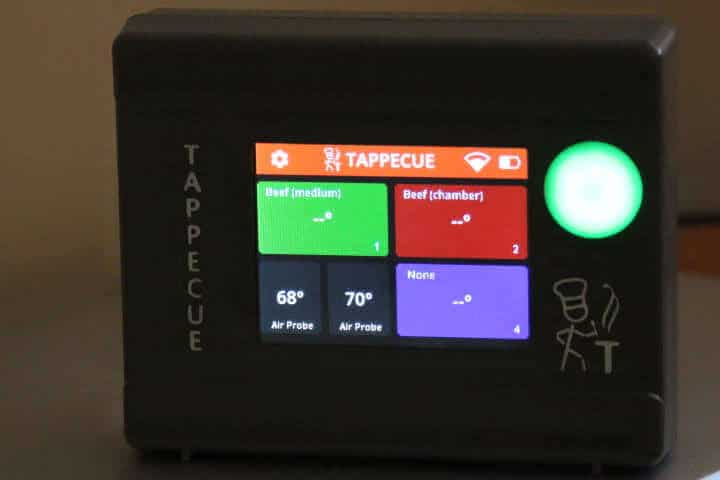 To use the Touch in offline mode, the Touch unit itself acts as its own WiFi (not connected to the internet). You then would connect your mobile device to it by finding the Tappecue’s network in your WiFi settings.

The wireless range in offline mode between my mobile device and the Touch was around 30 to 40 feet. This is taking into account multiple obstacles such as walls and is a better test in my opinion than the line-of-sight distances you will see quoted.

In terms of a winner between the AirProbe and the MEATER in the wireless range competition, I don’t think there is a clear winner. I think both thermometers are best utilized when connected to your WiFi and you don’t have to rely on the tenuous Bluetooth connection of your mobile devices.

This review will undoubtedly change over time when I’ve had more time to use the Tappecue Touch AirProbe. My initial thoughts are it definitely measures up to the MEATER Plus in terms of basic temperature monitoring.

I would like to put it through more varied tests to see how it performs on a rotisserie or during a long smoke session.

With more usage, I hope to gain a better understanding of its value. As of right now, I see it as a great addition to the Tappecue Touch’s growing arsenal of attachments.

You can check out the Touch and the AirProbe at Tappecue.com. Thanks for reading.