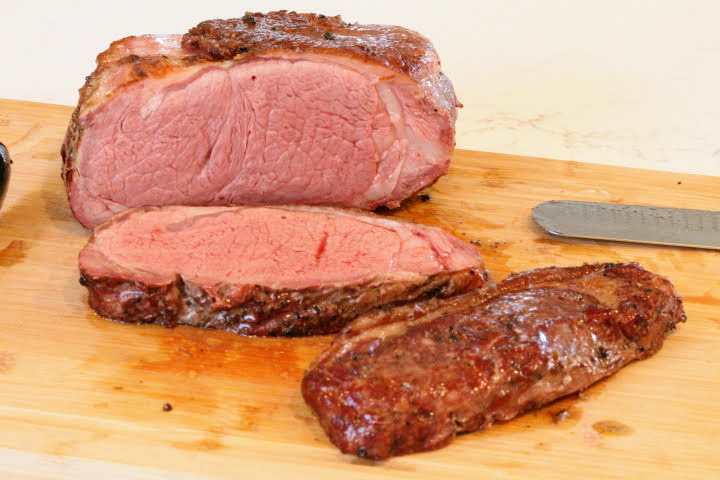 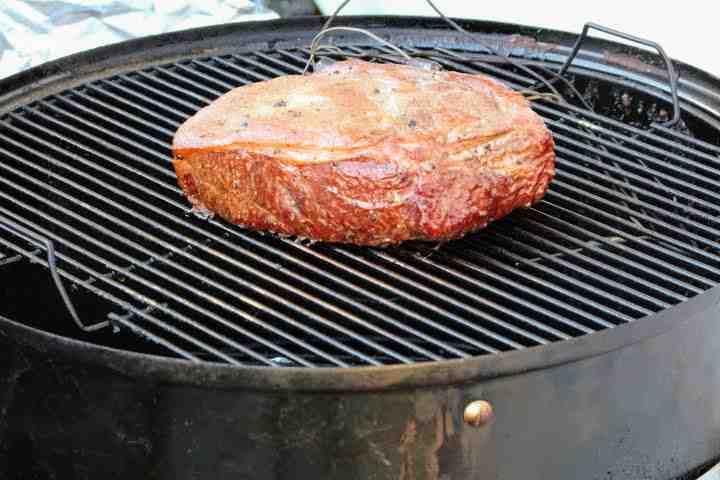 If you’ve ever had a new york strip steak, a New York Strip Roast is the larger cut of beef from which a new york steak is portioned.

It’s easy to think of this roast as just a very large new york strip steak. 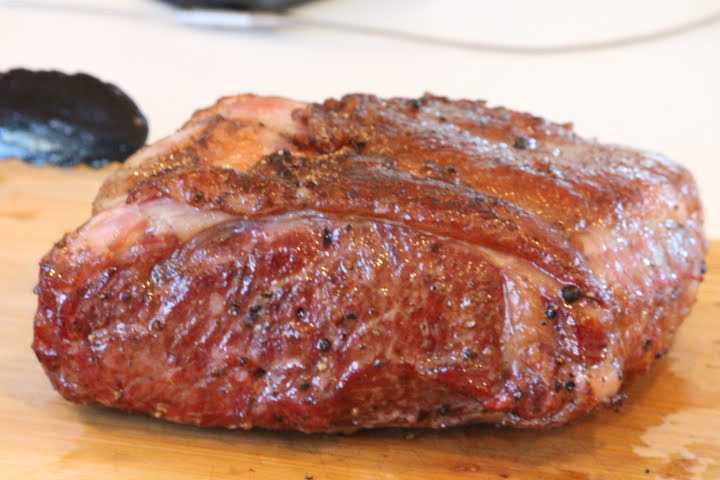 Other than a grill and some wood smoke, you’ll also need an accurate bbq thermometer to track the smoking temperature as well as the internal temp of your roast.

Product prices and availability are accurate as of the date/time indicated and are subject to change. Any price and availability information displayed on [relevant Amazon Site(s), as applicable] at the time of purchase will apply to the purchase of this product.

Prices pulled from the Amazon Product Advertising API on:

Here’s a recipe for how to smoke a New York Strip Roast. 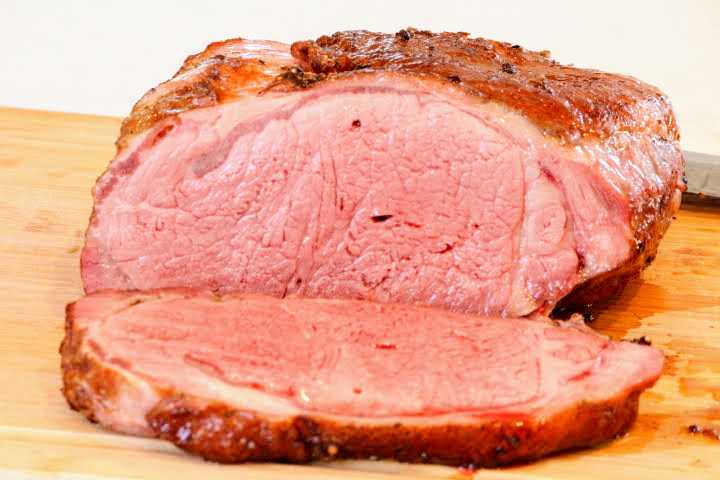 Step One: Dry Brine Your Roast

The first step to getting your New York Strip Roast ready for smoking is to salt the outside well beforehand.

The process of salting your meat and letting it rest for an extended amount of time before cooking is also known as dry brining, or salting.

The benefits of dry brining are a more evenly and deeply seasoned roast that is juicier as well. 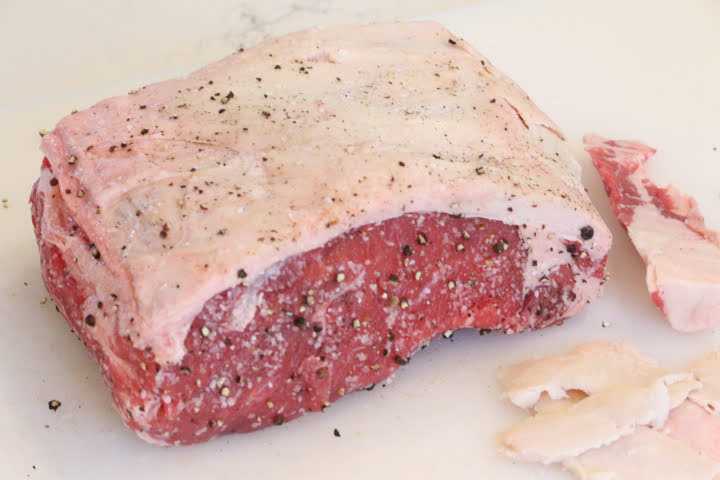 Salt and pepper are great on their own. It’s also helpful to trim off any thicker layers of fat for even cooking.

How does dry brining work?

When you salt the outside of a piece of meat, the salt will draw out moisture from the meat.

A brine is formed with the liquid of the meat and the dissolved salt.

The dissolved salt in this brine is then reabsorbed back into the meat through a process known as diffusion.

This salt will also dissolve muscle proteins, allowing your roast to absorb and retain more moisture.

If you simply season your roast right before cooking you lose out on all these benefits, the roast will only have seasoning on its surface.

How much time should you allow for dry brining your roast before smoking?

To properly season a 5 pound New York Strip Roast before cooking, allow for at least 6 hours up to 24 hours for brining.

How much salt should you use? A good rule of thumb is one teaspoon of salt per pound of meat.

For my 4-pound strip roast, I used around one and a half tablespoons of kosher salt.

Also, take this time to trim off any extra-fatty areas from the fat cap to promote even smoking. 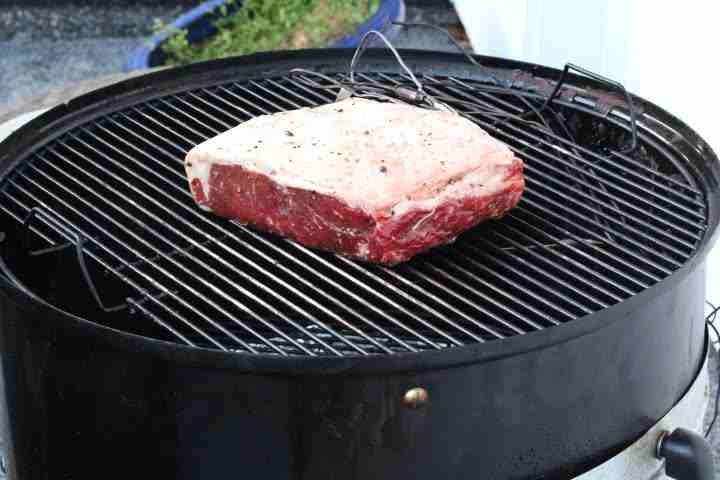 Rubs and Other Seasonings

You can use any spice rub or seasoning you prefer to flavor your strip roast.

If you’re using a pre-made spice rub with salt, then you can use that in place of the salt during the dry brining step.

I like to keep it simple with black pepper and kosher salt but you can certainly add whatever you like during the seasoning step.

Once you’ve properly seasoned your New York Strip Loin Roast, you’ll want to set up your grill or smoker for smoking.

If you’re using a traditional charcoal kettle grill or a gas grill, you’ll want to set them up for smoking with indirect heat with a hot side and cool side. (also known as a two-zone fire) 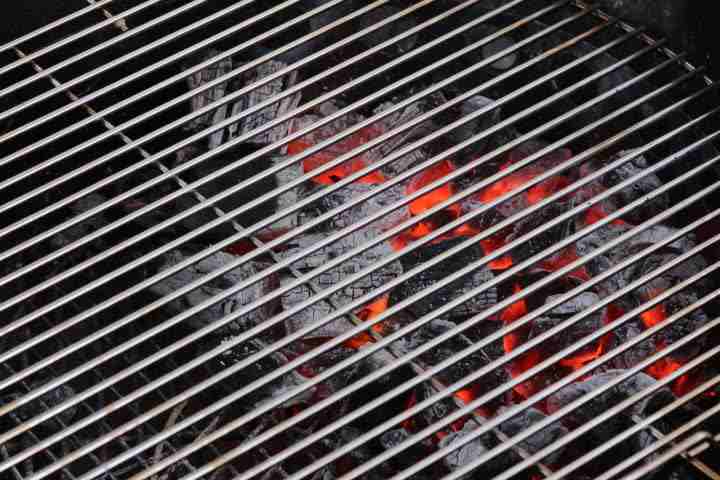 Lit charcoal on one side of the grill and the other side is empty, a two-zone fire.

Most temperature gauges in the lids of gas and charcoal grills are inaccurate.

To monitor the smoking temperature of your grill, place a temperature probe at grill grate level about two inches from where your roast will be on the cool side of the grill. 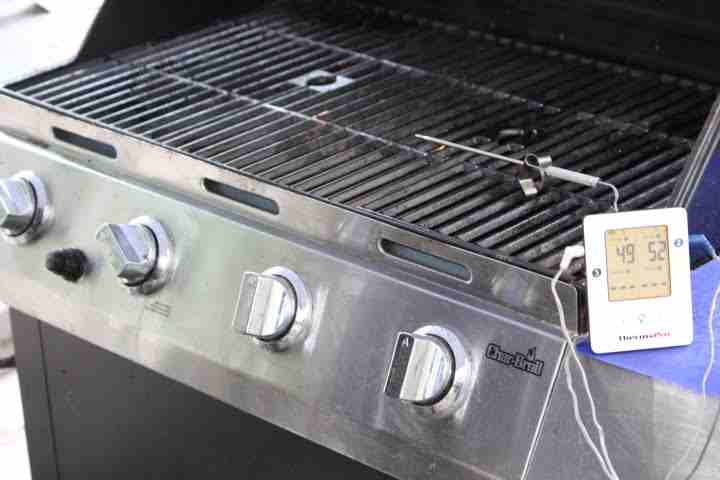 Make sure the tip of the temperature probe is in line with the edge of the roast closest to the heat.

This will give you an accurate reading of the temperature your roast is smoking at. 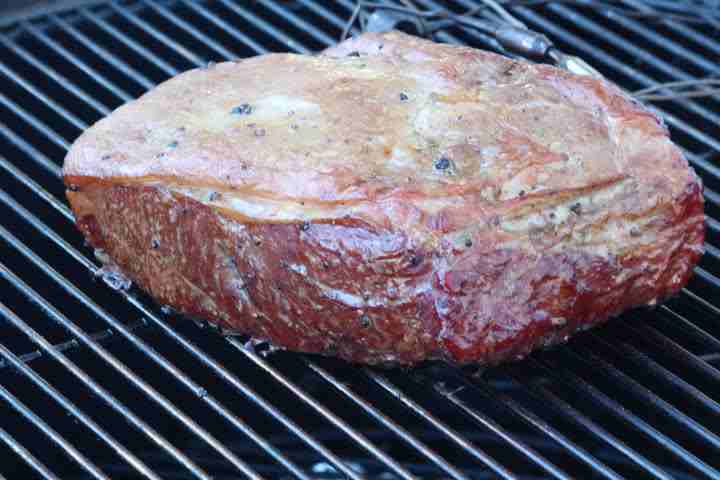 A smoking temperature of around 250 degrees Fahrenheit is a good temperature at which to smoke a New York Strip Roast.

You could smoke it at 225 degrees Fahrenheit but I find that it just adds unnecessary time to your cook.

A New York Strip Roast is a lot leaner cut of beef than a chuck roast or brisket, where a lower smoking temperature is ideal to break down their collagen.

However, you also need to be careful to not let your smoking temperature creep towards 300 degrees Fahrenheit, as you want to maintain even cooking from edge to edge.

A smoking temperature of 250 degrees Fahrenheit will result in an evenly-cooked, rosy interior from edge to edge with a nice amount of smoke. 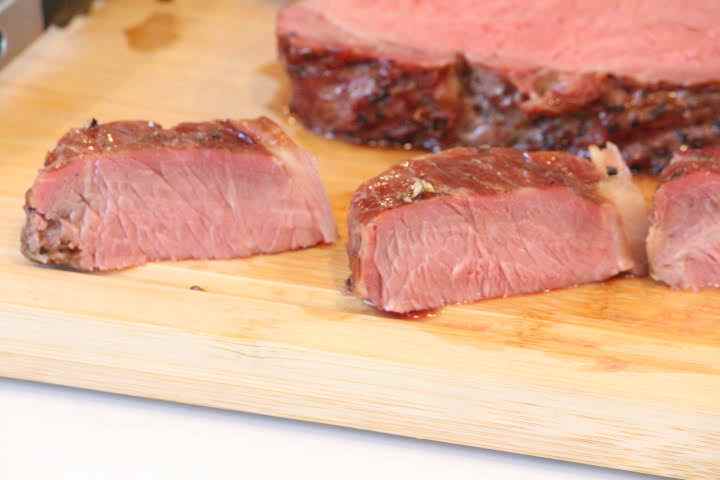 A pink smoke ring just beneath the surface of the meat.

Now that we’ve got the smoking temperature dialed in, what about the smoke?

What kind of wood should you use to prepare a Smoked New York Roast?

Oak is a great choice, mesquite is good as well.

But if all you have on hand is apple, cherry, hickory, etc. that will work as well.

The key is to not add too much smoke.

If you’re smoking on a traditional charcoal kettle grill you can add two, fist-size amounts of wood chunks (preferable) or wood chips to the edge of the lit charcoal.

If you’re using a gas grill, prepare an aluminum foil packet the size of a letter with a cup full of wood chips. 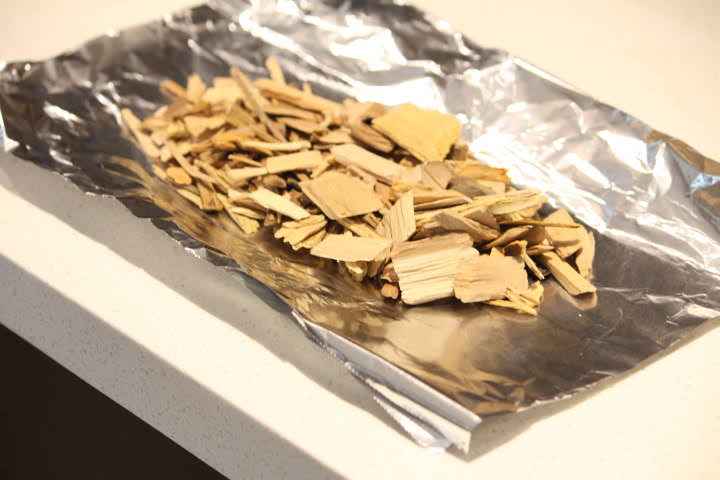 Slit two, two-inch slits in the foil packet and place it over the burners on the hot side of the grill. 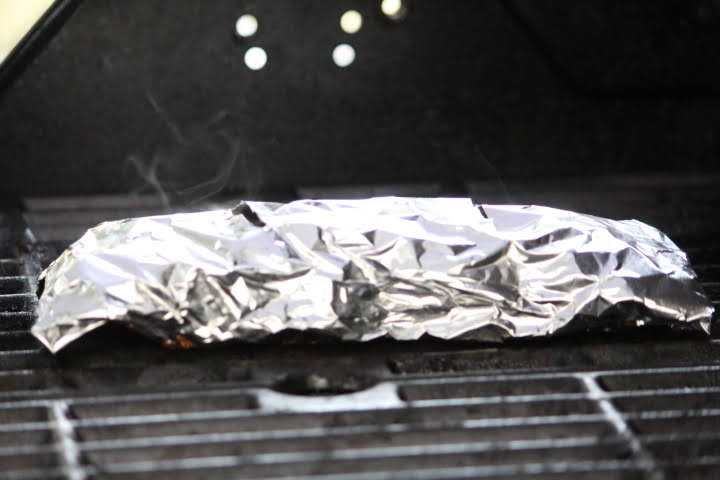 Once your grill or smoker is ready, place your New York Strip Loin Roast on the grill grate and insert a temperature probe in the middle of the meat to track its internal temp.

If your bbq thermometer has more than two probes you can also place another temperature probe on the edge of the roast to monitor the edge in conjunction with the middle. 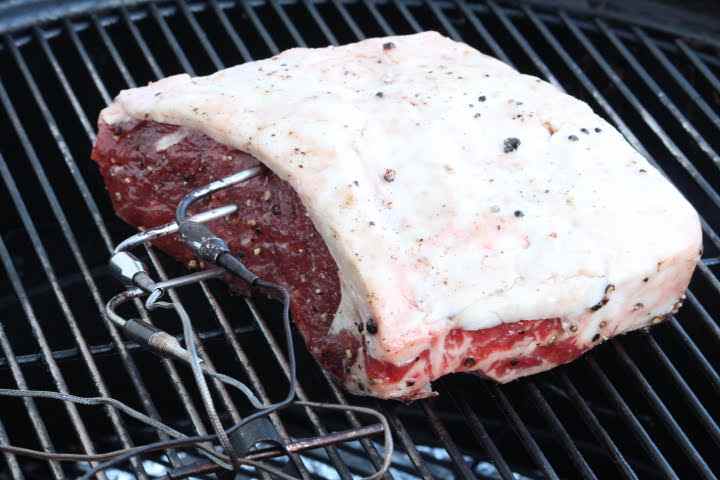 If you’re attempting to smoke a large New York Strip Roast weighing 8 to 10-pounds you will run into problems smoking it evenly from edge to edge.

It will take a lot of time for the middle to get to your desired temperature while the outside becomes overcooked.

I would suggest cutting it into two smaller roasts and smoking them separately. Less time and better results.

Smoke your roast until you reach your desired temperature. 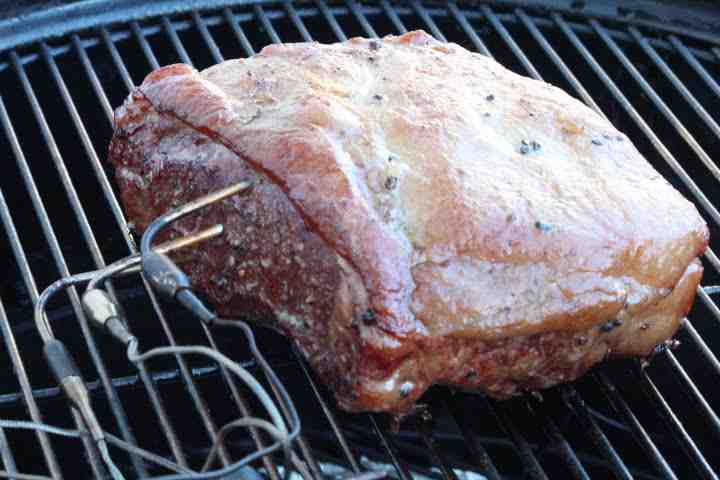 The temperature of your smoked new york strip roast comes down to personal preference.

If you want a roast that is rare from edge to edge, you’ll want to pull it off the smoker around 115 degrees Fahrenheit. 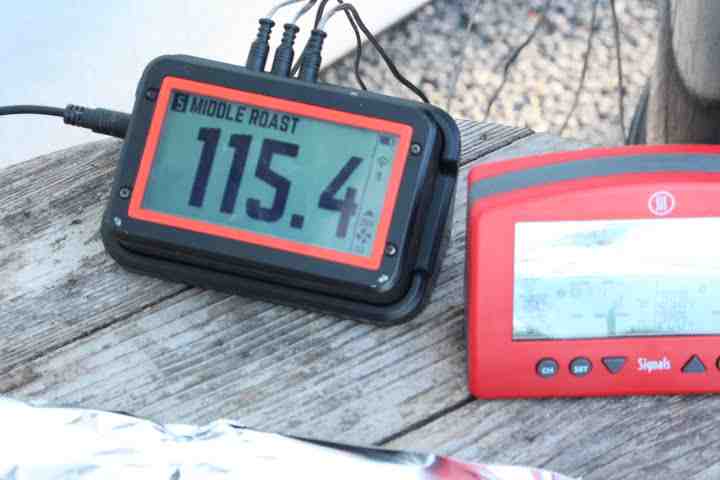 Accounting for carryover cooking of between 8 to 12 degrees, this will result in a nice rare interior.

What is a typical cook time for a 4 to 5-pound New York Strip Roast?

Step Four: Sear Your Roast and Rest It

Searing the outside of your roast once you pull it from the smoker will give you a flavorful outside crust.

For those of you worried about overcooking your roast when searing, it takes extended time and heat to raise the internal temp of it much.

The easiest way to sear the outside is to do it in a cast-iron pan over high heat with a little butter or some olive oil.

You can also sear it on a gas or charcoal grill as well. 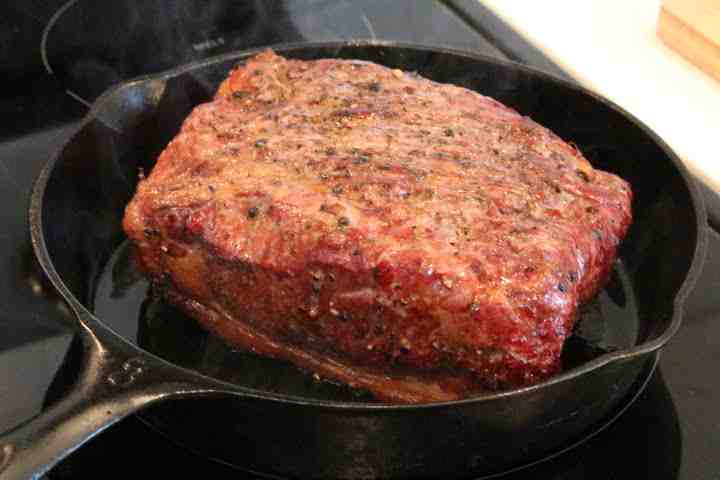 Generally, it should only take a couple of minutes to sear the outside of the roast.

Start the roast fat-side down in the cast iron pan and sear it for a minute or two, then flip it over and sear the other side for about a minute. 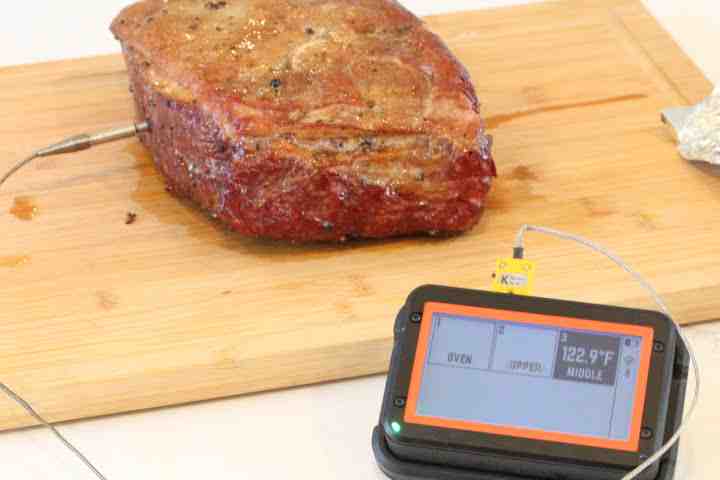 Remove the roast to a cutting board and tent it with foil.

Let it rest for 20 to 30 minutes and then slice and serve. 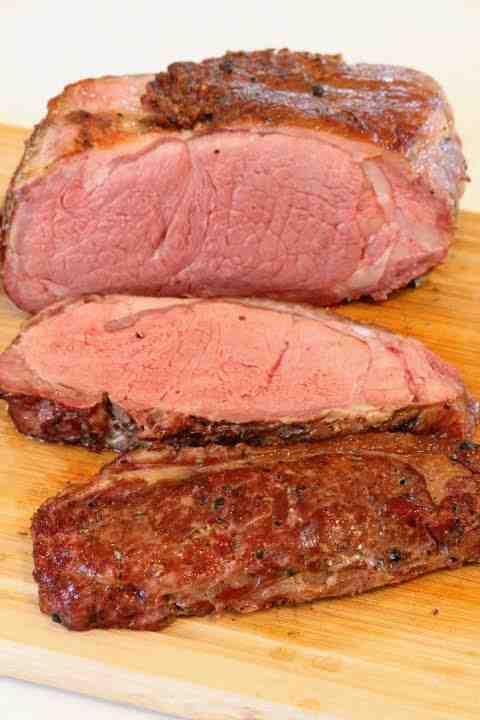 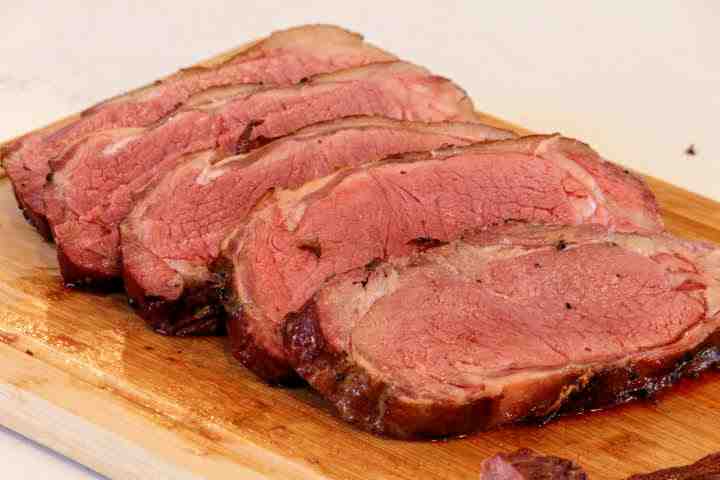 Oil or Butter for Searing

How to Smoke Turkey Thighs