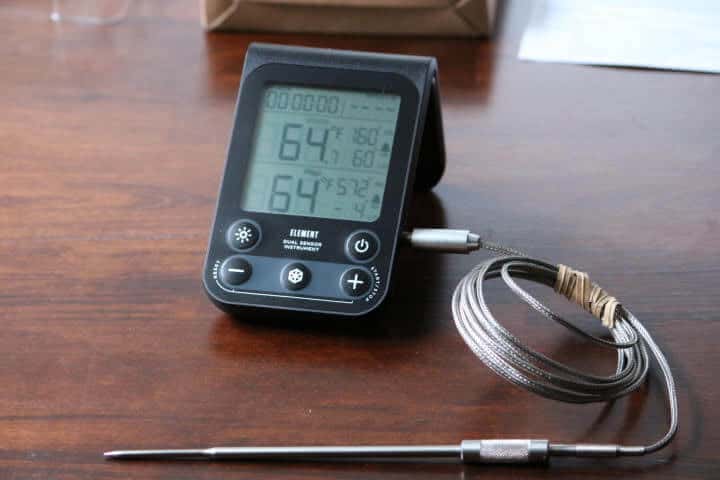 The Lavatools Element oven meat thermometer is a nice thermometer that has flown under the radar for some reason. 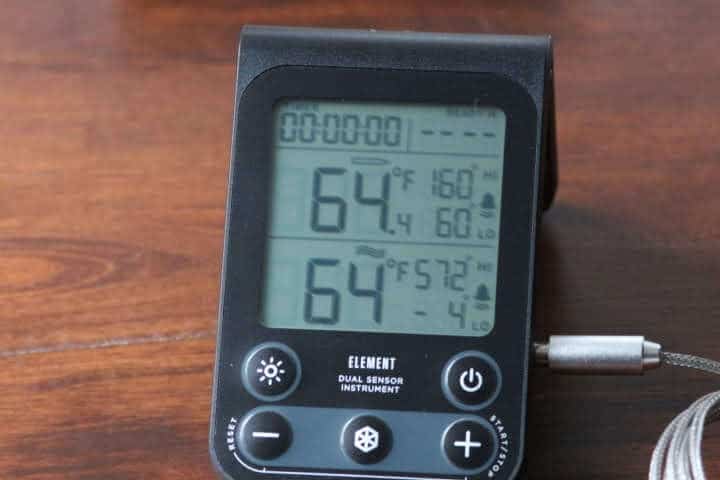 Closeup shot of the Lavatools Element screen. Notice the hi and low temperature alarms on the right.

I think a lot of people are missing out on a great meat thermometer that they can use not only in the oven but on the grill as well.  It has something the other oven meat thermometers don’t have, a dual-sensor probe.

That’s right, the Element has a probe that monitors not only food temperature but ambient cooking temperature as well.

Intrigued? Probably not as much as me and my meat thermometer proclivities, but it is still a nice device.

Let’s take a look at the Element and see how it stacks up to the popular prom dates in the category, the Thermoworks, and the ThermoPro oven meat thermometers.

According to the box, the Lavatools Element is a “gourmet wired oven thermometer.” The main feature that sets the Element apart from other oven meat thermometers is its dual-sensor probe.

The benefit of this is that you only need one probe to do two jobs at once. There is no need to set up a separate probe to monitor your oven’s or grill’s temperature.

That also means not having to worry about keeping that ambient probe off an oven rack or grill grate using a grill clip or ball of foil.

You’re probably wondering why you would need to monitor your oven’s temperature? You would be surprised how inaccurate some ovens are in temperature readings. 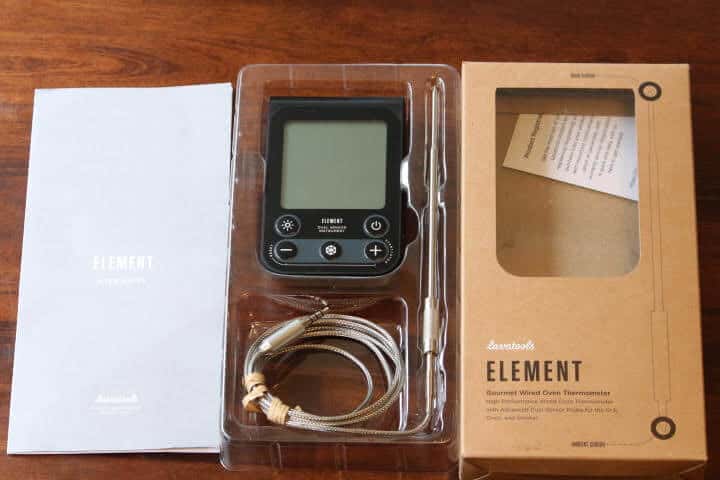 Features of the Lavatools Element

Here are all of the important features of the Lavatools Element meat thermometer.

The Element has a large temperature range capable of monitoring high-temperature cooking such as frying oil.

The Element has a backlight button that illuminates the screen for 5 seconds, making it easy to see at night by the grill. 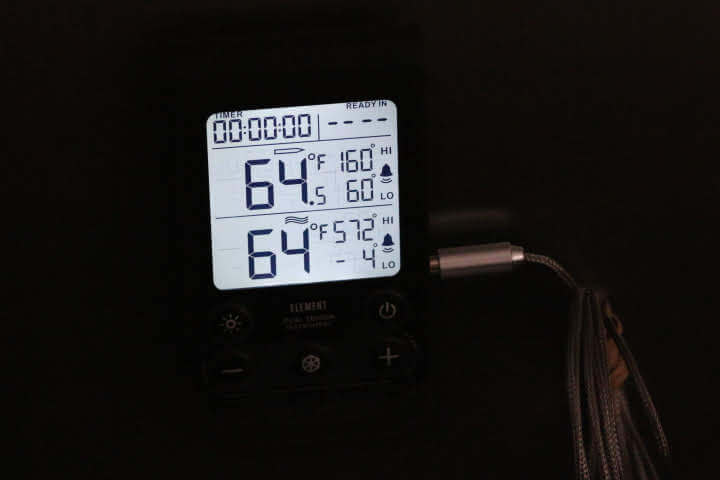 Ok, now if I could only see my pork chops on the grill.

The Element has a pull-out stand in the back as well as a magnet if you want to stick it to something metal.

You can switch between Celsius and Fahrenheit by pressing down on the on/off button for 2 seconds.

There is a timer that you can set that will alert you when it goes off. Helpful if you need help reminding you when side dishes are done.

I discussed the dual-sensor probe briefly before and I will go into more detail on it in a little bit. The probe itself is rated IPX7 waterproof. 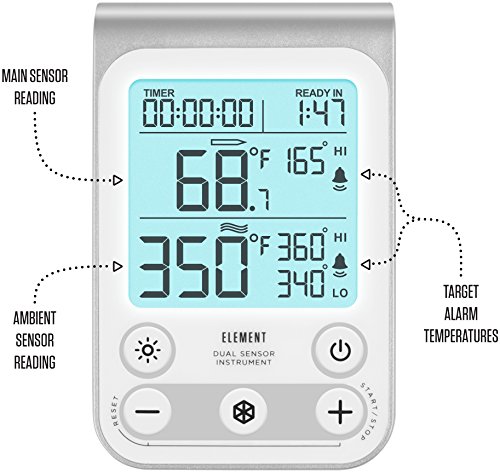 The Accuracy of the Lavatools Element

Having a probe that measures both food temperature and ambient cooking temperature is great, but how accurate is the probe?

I decided to compare the Element against the Thermoworks Signals and the ThermoPro TP-17 meat thermometers in two separate tests.

My first test involved comparing all three thermometers’ temperature readings in a 140 degree Fahrenheit sous vide water bath. This was a test of the Element’s main sensor for food in its tip.

The accuracy of my sous vide machine’s temperature is questionable but the main takeaway is that they are all reading the same water.

As you can see the Element showed similar readings to the other thermometers. 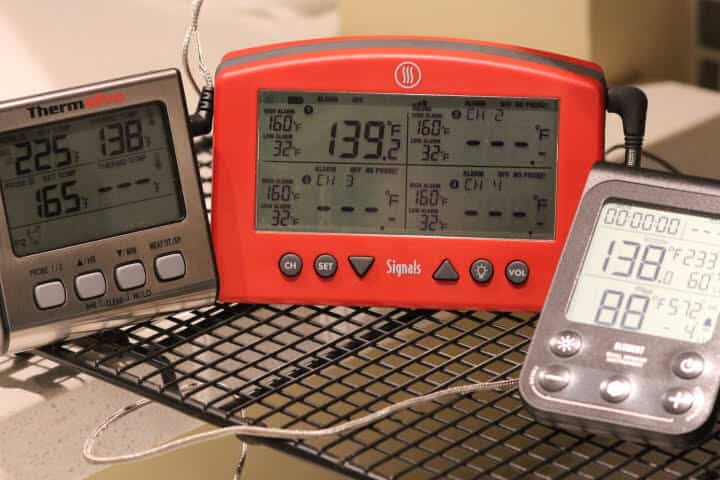 The next test was to measure the ambient temperature sensor in the Element. For this, I put all three probes in a 325-degree oven.

As I noted earlier, it is always good to double-check your oven’s temperature sometimes. My oven’s convection baking temperature at the 325-degree setting would fluctuate up or down 10 to 15 degrees.

I am going to trust the Signals thermometer to tell me the correct temperature. The Element’s ambient temperature sensor was notably slower than the other two probes but eventually got to within 5 degrees.

For right now I would rate the accuracy of the Element’s main sensor as excellent and the ambient temperature sensor as just okay. It was a lot slower at reading temperature fluctuations than the other two thermometers. 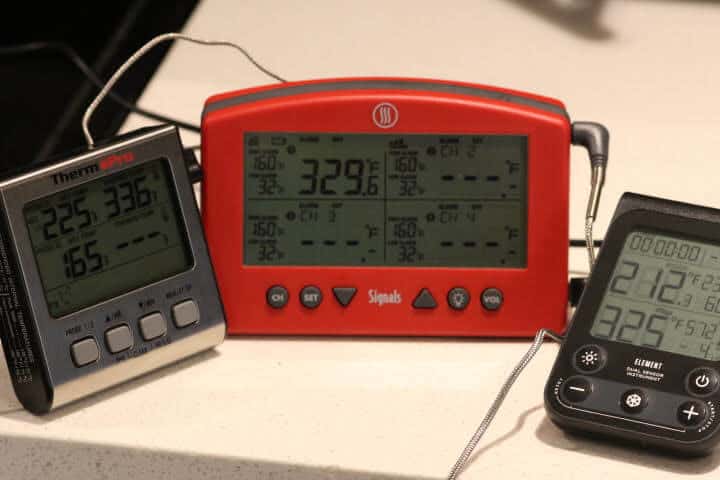 How durable is the Element thermometer? Well, that is a quality that is measured over time. I will continue to use the Element and I will report any issues as they come up.

One thing to note is the dual-sensor probe is rated IPX7 waterproof and it can be submerged in liquid. That is, you can submerge it up until the jack at the end of the probe, that isn’t waterproof. 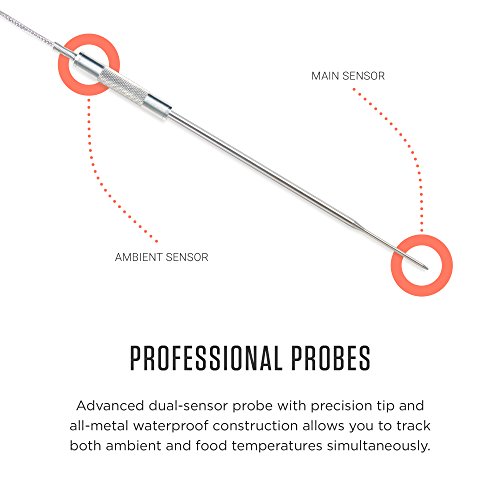 Price Relative to the Competition

How does the Element stack up against similar oven meat thermometers in terms of value for its price? The Element’s price point is a few dollars more than the TP-17 at the time of this review.

Of course, prices fluctuate throughout the year but the Element is usually 3 to $5 more.

The Element vs the ThermoPro TP-17

How does the Element stack up against them? Well, it depends on what you value more in your own cooking situation.

The TP-17 has two probes that enable it to monitor two food items or one food item and the ambient cooking temperature. The Element, although it is dual-sensor, can only monitor one food item.

I personally like only having to deal with one probe to do both jobs, but I can see the added value in having another probe to monitor another piece of meat.

The ThermoPro TP-16S only has one probe and is a good oven thermometer but I would rate the Element a better thermometer due to its dual-sensor capabilities.

Another thing I like about the Element is I find it easier to use than the ThermoPro models. Although they are solid thermometers, I find their 10 different meat presets a feature I don’t really need.

The TP-17 and TP-16s models both have user-defined alarm capabilities, it’s just that you have to scroll through all of the unnecessary meat presets to get to them.

It’s much faster if I can just set my own temperature alarms and get to other things. The Element makes it easy to set your hi/low-temperature alerts.

If you are someone looking for an oven meat thermometer that can also double as a grill thermometer, I think the Lavatools Element would be a good fit for you.

I find it easier and more straight-forward in its usability than some of the other meat thermometers I’ve encountered.

For me, the dual-sensor probe is what sets it apart from the other oven meat thermometers on the market. Although the ambient temperature sensor isn’t as reactive as a stand-alone ambient probe, it eventually gets to around the same temperature level.

I will continue to monitor the Element’s performance and give updates as needed. For now, I rate it a good oven meat thermometer that’s worth the money.