The Internal Temperature of Pork Sausage When Done 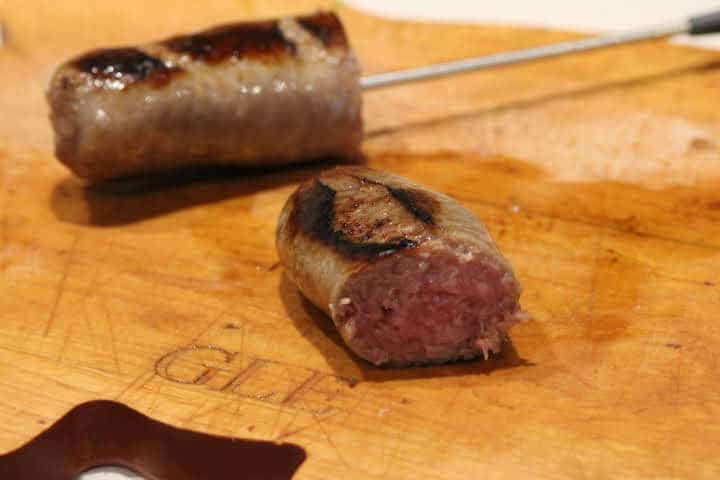 This is a higher temperature than their recommended safe-serving temperature of whole cuts of pork at 145 degrees Fahrenheit /62 degrees Celsius.

So, why is the internal temperature of pork sausage when done of 160°F higher than the 145°F required for whole cuts of pork?

It has to do with the grinding process. More about that in a bit. But for now, let’s take a look at the different types of pork sausage.

Pork sausage comes in many shapes and forms. You have traditional pork sausages in casings such as bratwurst, Italian sausage, chorizo, etc. You also have pork sausage breakfast patties and pork sausage crumbles.

No matter what shape or form pork sausage comes in, you need to make sure it is at a safe serving temperature of 160 degrees Fahrenheit. So, what is the best way to cook pork sausage resulting in a safe-to-eat, delicious end product?

Probably the easiest way to cook pork sausage is to poach or simmer them in a liquid first and then finish them on a hot grill or skillet. This brings the whole sausage up to temperature faster as the thermal conductivity of water is 23 times that of air. 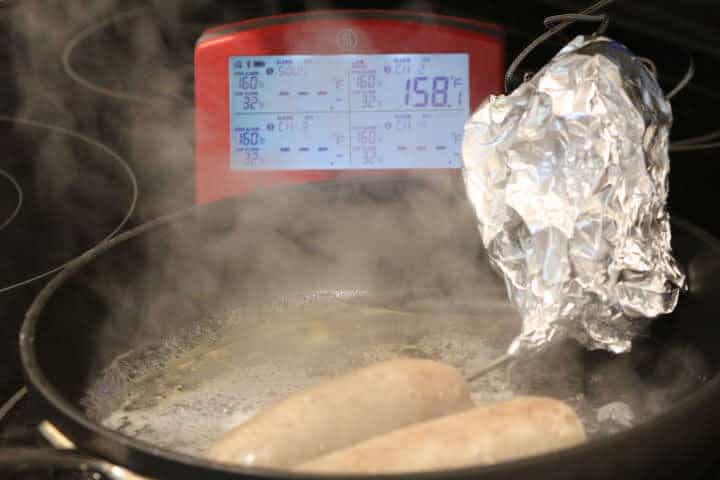 Simmering pork sausage almost done at an internal temperature of 158 degrees Fahrenheit, notice the water is almost gone in skillet.

Another method that is gaining popularity amongst chefs and grilling enthusiasts is cooking sausages first in a sous vide water bath and then finishing them on the grill or a skillet on the stovetop. This method of cooking will give you a juicy sausage on the inside with a crisp, well-browned exterior. 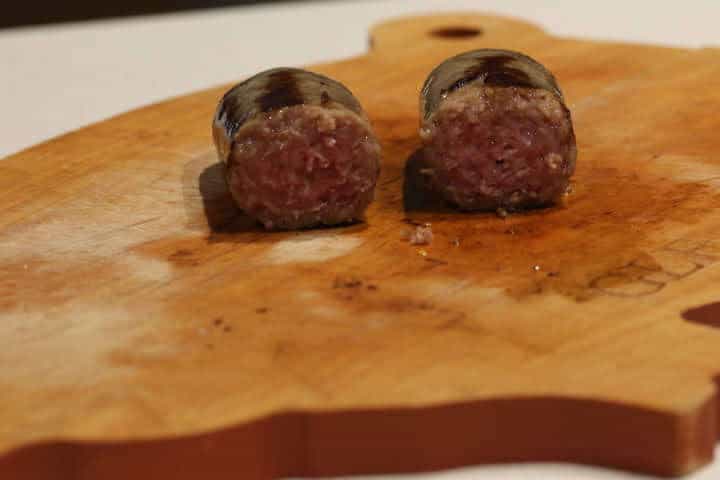 Interior of a pork sausage that was cooked sous vide first and then finished in a hot skillet.

I will discuss these two methods that are great for preparing pork sausage to an internal temperature that is not only safe but delicious and juicy as well. 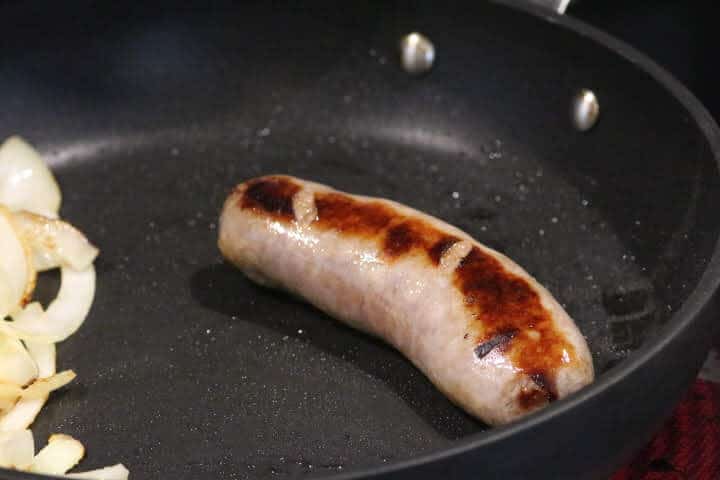 Mmmmmm, Bratwurst. Notice that the casing opened in two spots, but no juice came out. This is due to cooking it sous-vide style first. Note: This is the same bratwurst as the featured image for the article.

Why Ground Pork Must Be Cooked to 160 degrees Fahrenheit

As previously mentioned, whole cuts of pork such as pork chops or pork tenderloins are considered safe to eat at 145 degrees Fahrenheit/ 62 degrees Celsius. So why does ground pork need to be cooked to 160 degrees Fahrenheit? It all has to do with the grinding process introducing bacteria from the surface of the meat to every part of the ground meat.

This surface bacteria is the first thing killed when cooking a whole cut of pork above a certain temperature. If you were to grind up a pork shoulder, the surface bacteria on the shoulder would be dispersed throughout the grind.

This dispersal of surface bacteria pertains not only to pork but to all whole pieces of meat that are ground, such as grinding chuck roast into hamburger.

How is this possible? Let’s take a look at this pasteurization process that happens when you sous vide meat. 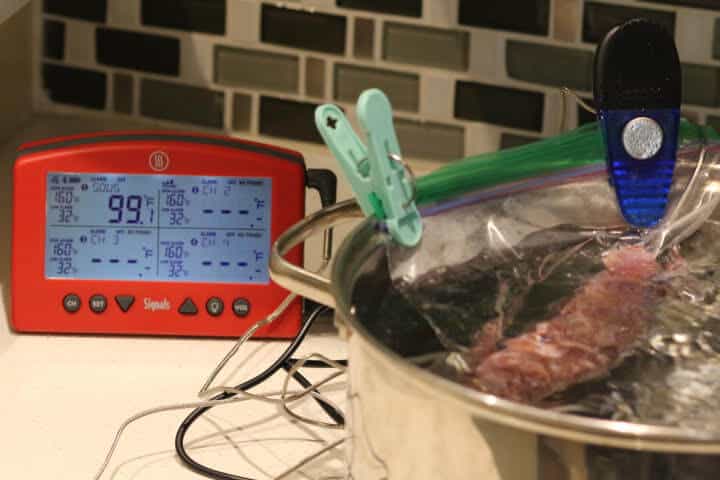 The Pasteurization of Meat: A Function of Temperature and Time

Pasteurization, according to Understanding Food Systems: Agriculture, Food Science, and Nutrition in the United States, is a mild heat treatment designed to kill the most heat-resistant vegetative pathogens.

A factor you must take into account is the thickness of your meat as well. It will take longer to pasteurize a thick steak than it will a relatively thin sausage. This size variable is taken into account in the pasteurization tables listed here.

When you cook something in a sous vide water bath you can control both the temperature and time variables it takes to kill harmful bacteria in food.

The ability to make food safer at lower temperatures has the benefit of serving food that isn’t dry and overcooked. Let’s see how this works for pork sausage. 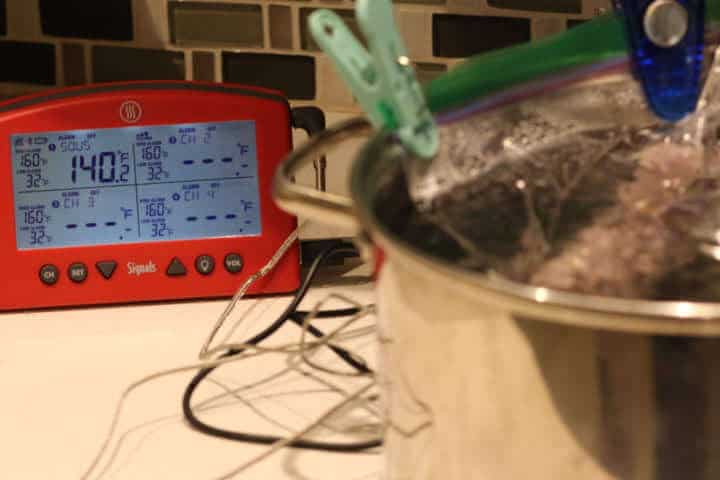 The popularity of the sous vide method of cooking has exploded in the past decade, and for good reason. It allows you to evenly heat food to a safe temperature first, then finish the cooking process on a hot surface.

A classic example where sous vide methods are helpful is cooking a thick steak.

Cooking a two-inch-thick steak to medium-rare on a grill is extremely difficult. You need to bring the middle of the steak to 130 or 135 degrees Fahrenheit without overcooking the outer part of the steak.

With the sous vide approach you can bring the whole steak to a temperature of 125 degrees Fahrenheit and then sear the outside to get a nice brown crust.

You can bring this same approach to cooking pork sausages. Using a sous vide water bath you could bring your pork sausage to an internal temperature lower than 160 degrees Fahrenheit. Let me take you through the process.

As I mentioned earlier, you can pasteurize your food and make it safe to eat at temperatures lower than the recommended USDA minimum temperatures using the sous vide cooking approach.

Most pork sausages are around 1 to 1.5 inches thick. Using the internationally-accepted meat pasteurization table guidelines, you could bring your pork sausage to a temperature of 140 degrees Fahrenheit, hold it at that temperature for 12 minutes, and it would be safe to consume.

However, the sausage is extremely pale when you pull it out of its water bath. Not to worry, you can then brown it nicely on a grill or hot skillet, and still have a juicy interior.

I did exactly that with my sous vide machine set to 141 degrees Fahrenheit, then I inserted a probe into the pork sausage from my Thermoworks Signals thermometer and tracked the progress. 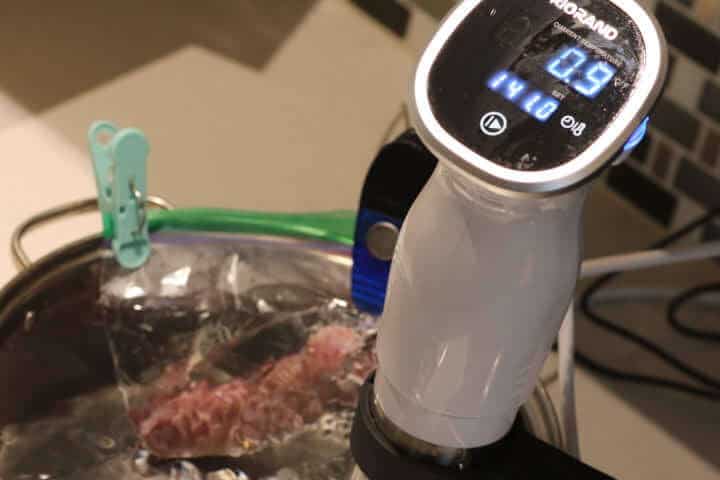 It took around 30 minutes for the pork sausage to come up to the 140-degree mark. Then, it only needed to maintain that temperature for twelve minutes to be considered pasteurized. 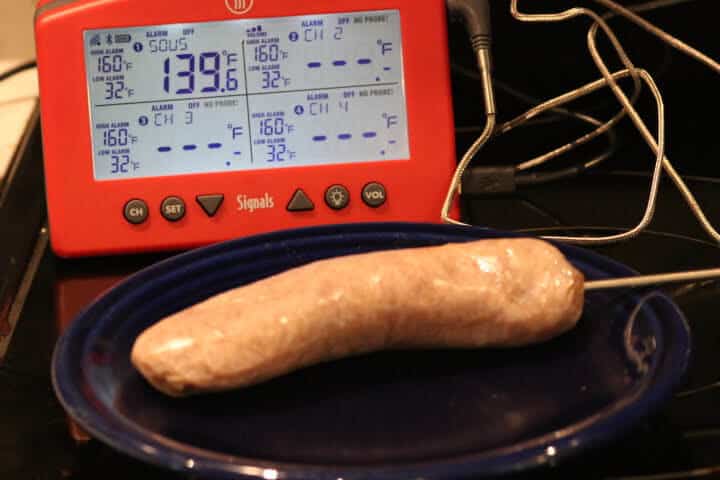 The pale color of sausage after the sous vide process. Completely pasteurized and safe to eat, but not visually appealing.

With the inside of the sausage safe, all I needed to do was brown the outside of it.

You can also achieve similar results by poaching or simmering pork sausages in a pan or skillet with some water or beer.

The benefit of cooking the sausages first in a liquid is that you can cook the sausages more evenly. It is difficult to get a crispy exterior while having the center of the sausage cooked as well without using this or the sous vide method.

You can poach or simmer sausages in beer or water in a skillet. Simply place your sausage in the skillet and fill it halfway up the sausages with whatever liquid you choose.

You can either cover the skillet or not, depending on how fast you need to cook them. This should take 15 to 20 minutes. Once the water is gone the sausages will then brown to finish in the skillet. 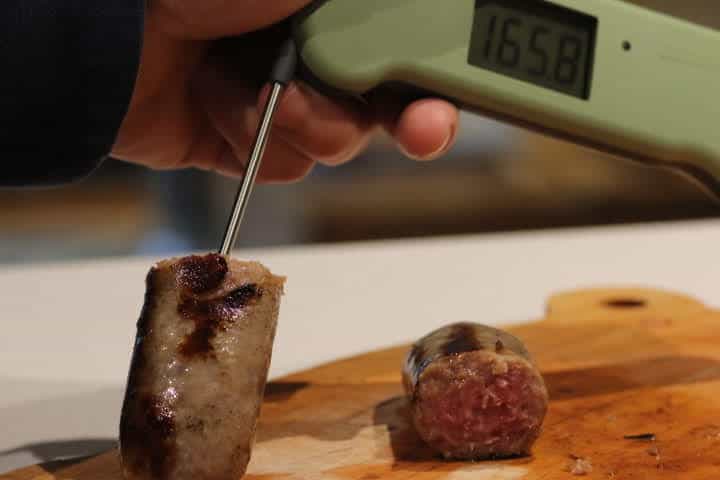 A bratwurst reading 165 degrees after simmering and grilling.

When you cook a pork sausage patty in a pan or on a griddle you run the risk of overcooking them by quite a bit. Well, you can use our old friend water again for cooking sausage patties as well.

When cooking sausage patties in a skillet just put in enough water to cover the bottom of the pan. This water will give the interiors of the sausage patties a jump start on coming up to temperature with the outsides that are in direct contact with the skillet.

I’ve found the best temperature on a stovetop to be around medium to medium-low. If you are using a gas stovetop you might need to go a little lower in heat. Here’s the sequence:

As far as cooking sausage crumbles, you can add a little bit of water to the skillet to expedite the cooking process as well, probably not more than a quarter cup should work.

Sometimes it is hard to tell when pork sausage crumbles such as chorizo are cooked through completely. A way to tell if they are done cooking is to grab a spoon and scoop up some crumbles. Then take your meat thermometer and test the temperature of the crumbles in the spoon.

Is a Little Pink in Sausage Okay?

Yes. In fact, it is impossible to tell if your pork sausage is done without the use of an accurate meat thermometer.

Although the internal temperature of a bratwurst when it’s done is 160°F, you wouldn’t know it by just looking at the inside of the sausage pictured below.

It is showing a bratwurst with a lot of visible pinkness in the middle with an internal temperature of 167 degrees Fahrenheit. 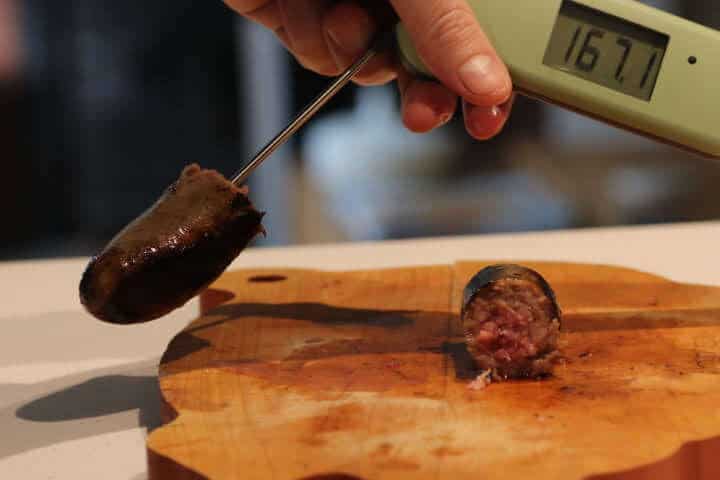 A bratwurst temping at 167 degrees Fahrenheit while having a pink middle at the same time.

I know what you’re thinking. More sous vide trickery, right? Nope. I cooked that bratwurst carefully in a skillet, with no water, over medium-low heat. I did turn it over to make sure all sides got nice and browned.

My whole point is if I didn’t have a meat thermometer, how would I know if that bratwurst was safe to eat? I’ve seen it happen so many times at barbecues when people overcook their sausages to get the pink out of them. I don’t blame them, they’re just being safe.

However, all it would take is a poke of the thermometer (off the heat) to see where they’re at temperature-wise. Yes, that one sausage might spurt a little fat juice out, but it’s either that or overcook all of them.

That’s why par-cooking the sausages first in liquid either by simmering or sous-vide methods makes grilling them so much easier. You immediately take away the risk factor of undercooked food and the cases aren’t going to burst open when they hit the high heat of the grill.

As you can see, there are more than a few ways to cook pork sausage to a safe internal temperature of 160 degrees Fahrenheit. Using a sous vide approach will allow you to go lower than that temperature through the process of pasteurization.

But you can still cook up a delicious sausage by just using a skillet and some water as well. This is the easiest way to evenly cook and then brown the outside of the sausage in as little as 20 minutes.

For more tips and information on how to cook and serve meat at the proper temperatures just check out the menu above, thanks for reading.