The Internal Temperature of a Pork Chop When Done 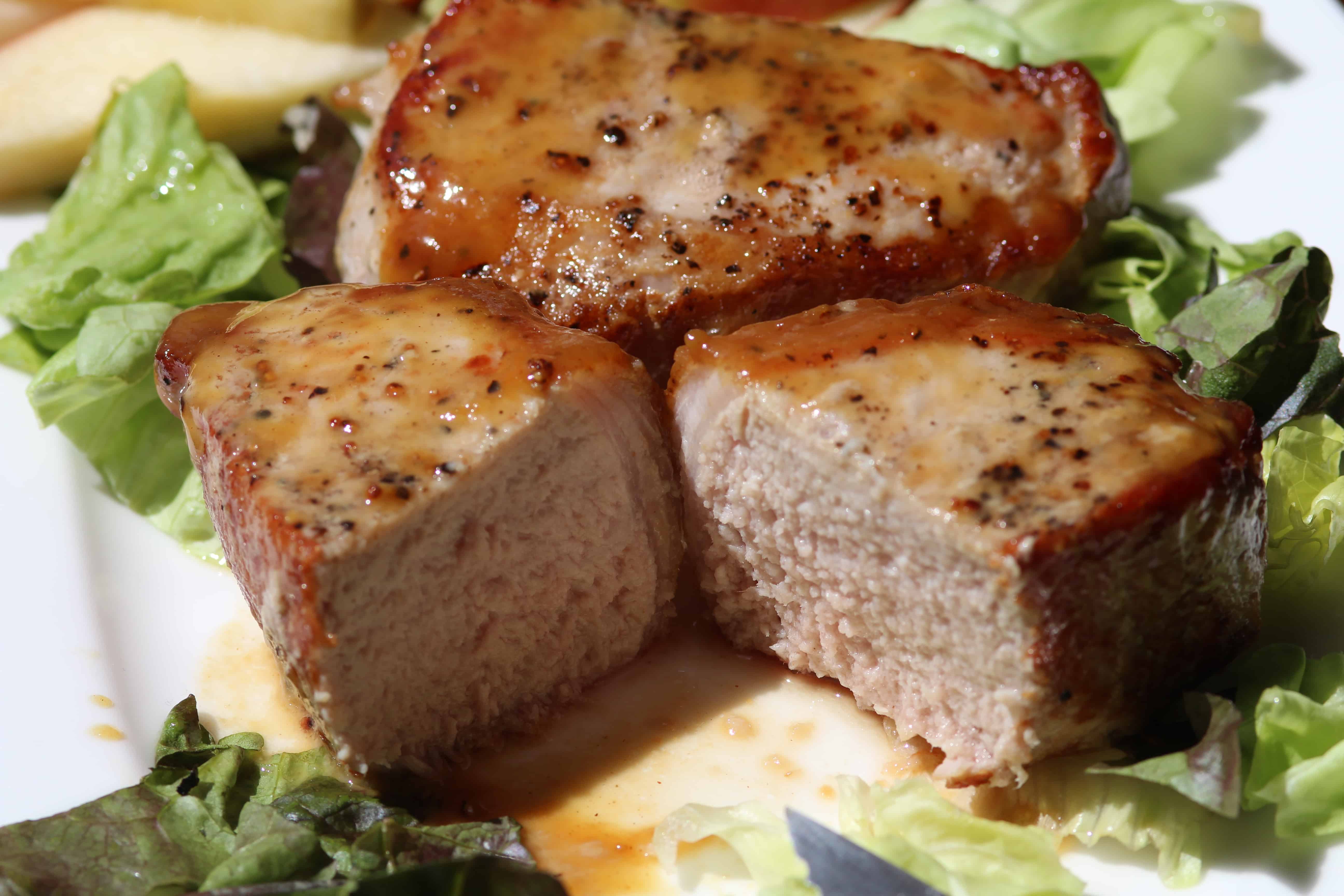 The fast answer to what temperature is a pork chop done is 145 degrees Fahrenheit ( 62.7° Celsius) with a three-minute resting period according to the USDA. This is the USDA’s guideline, https://www.pork.org/news/new-usda-guidelines-lower-pork-cooking-temperature/

With that being said, the fast answer isn’t typically the best answer. How much you want your pork chop cooked is a personal preference. If you notice the picture above, that is an 8-ounce boneless pork chop registering 146 degrees Fahrenheit with a little visible pinkness. 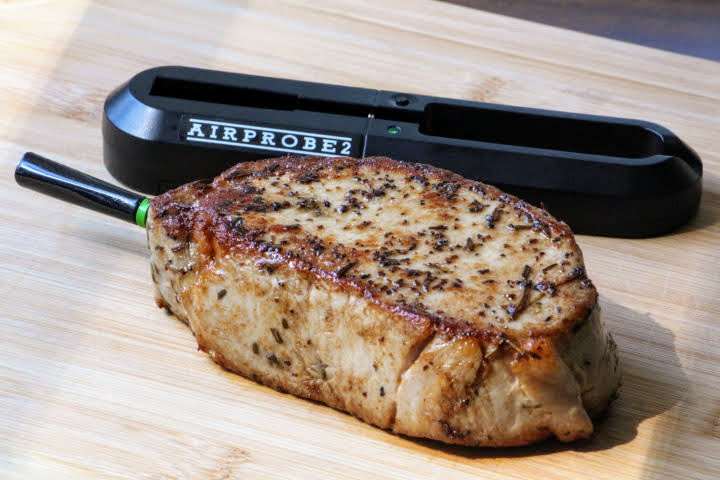 You could stop cooking the pork chops when they reach 130 to 135 degrees. Let them rest for 5 to 10 minutes.  The residual heat will raise the pork chop internal temp another 5 to 10 degrees depending on the thickness of the pork chop. This should result in a safe and juicy pork chop.

And before we get started, the absolute number one tool you need to cook and serve an amazing pork chop is a trustworthy meat thermometer. A good meat thermometer will help you with determining the proper pork temperature.

In this article, I will show you how to attain the best pork chop internal temperature by using various cooking methods.

Whether on the grill, stovetop, oven, or even sous vide, I’ll show you how to achieve a proper pork chop done temperature that is flavorful and juicy. 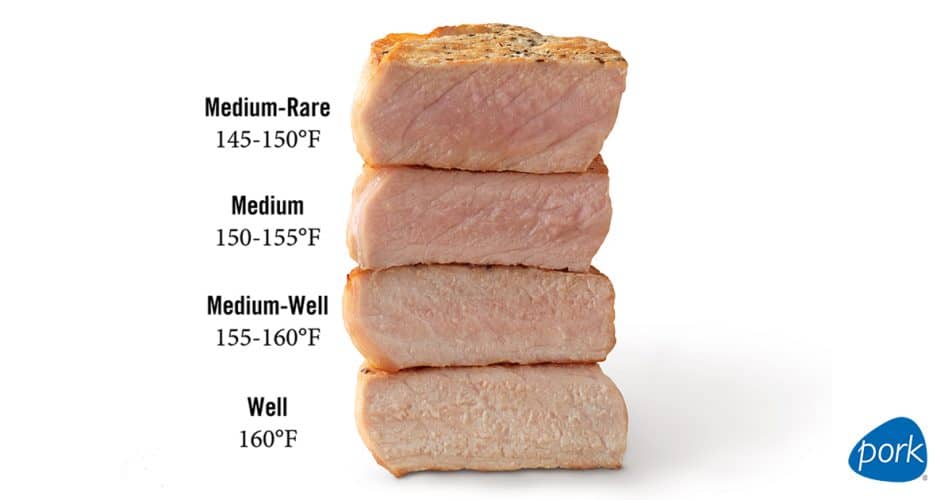 What temperature you cook your pork chop at depends on a few factors. Factors such as the type of cooking instrument, weight, thickness, and bone-in or boneless cut of pork. The following guidelines will vary due to the factors mentioned.

On a charcoal grill

Light a chimney starter with a large number of briquettes till most are turning ash color. Build a two-zone fire by moving 3/4 of the briquettes to one side.

Why the discrepancy between the temperatures in the boneless and bone-in techniques? I suggest pulling it at 140 degrees because the boneless cut will dry out faster. Once it rests, the residual heat of the chop will go up to the required 145 degrees.

For the bone-in pork chop, the bone will act as a heat shield. This means the meat closer to the bone will be rarer than the meat in the middle of the chop. Pulling it at 145 degrees will give you a moist and flavorful bone-in chop. The resting time will also raise the temperature 5 or so degrees to alleviate any concerns.

On a propane grill

The same cooking techniques as the charcoal grill. Get the grill hot with all burners turned to medium-high 400-450 degrees. After heating for 5 minutes turn all the burners except one to low (assuming you have multiple burners). 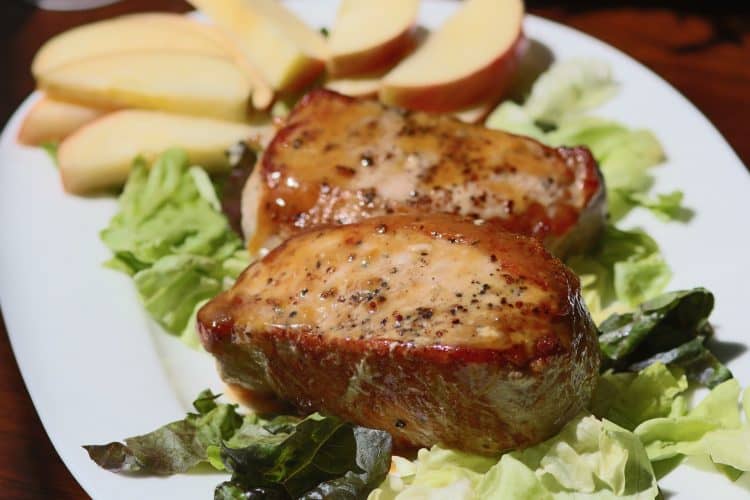 Place a rimmed baking sheet in an oven. Preheat the oven to 450 degrees. Meanwhile, heat a frying pan with a tablespoon or two of vegetable oil over medium-high heat, then cook each side a few minutes until browned. Transfer the pork chops to the baking sheet and cook them for 8 minutes, then flip them and cook them until they reach 140 degrees Fahrenheit, another 5 to 10 minutes. Then rest 5 to 10 minutes.

On the Stove Top

This technique works great for 6 to 8-ounce boneless pork chops. Heat oil in a skillet over medium-high heat until the oil is shimmering. Add the chops and cook them 4 to 6 minutes, then flip and cook another 4 to 6 minutes or until they reach 140 degrees.

Let them rest for 5 minutes.

This technique will work for all sizes of pork chops as well as pork tenderloins. Preheat your Sous Vide water to 136 degrees Fahrenheit. Place your pork chops in freezer-safe ziplock bags and lower them into the water when the temperature reads 136 degrees Fahrenheit. Cook them for one hour and remove them from the bags to a plate lined with paper towels. Pat the chops dry and heat a pan over medium-high heat with a tablespoon or two of vegetable oil.  When the oil is shimmering, brown the pork chops for 1 to 2 minutes on each side. Let them rest 5 minutes, then serve.

Check out the post on How to Cook Boneless Pork Chops in an Air Fryer.

Using the Tappecue AirProbe2 wireless meat probe, I was able to monitor the temperature of pork chops of varying degrees of thickness cooking in an air fryer.

Here are the cooking times for pork chops of different sizes in a 375°F air fryer:

How to cook a thick pork chop

On the grill (charcoal or propane)

Cook each side for 4 to 6 minutes over high heat. Then transfer to a cooler area and cook for 8 minutes, and then flip over. When the meat registers 125 degrees, take off the heat, then let them rest for 5 to 10 minutes.

On the stovetop and in the oven

For cooking a thick pork chop on the stovetop, first, preheat an oven to 450 degrees. Then, heat a skillet over medium-high heat with two tablespoons of vegetable oil. When the oil is shimmering, cook the thick pork chops for 4 to 6 minutes on each side, transfer them to the oven. Cook for 8 minutes, then flip them over and cook for another 8 minutes or until they register 140 degrees.  Let them rest for 5 to 10 minutes. A quick note, if you like your pork pinker and juicier, you can pull them off the heat at 135 degrees and still be safe.

Same technique as mentioned in the previous Sous Vide section. The Sous Vide process makes cooking larger pork chops even easier. Why?  Because you can set the cooking temperature to around 135 degrees and allow a large amount of meat to all come to the same temperature. Then,  just before you’re ready to serve, brown them on each side for a nice exterior in color and flavor.

Knowing the best internal temperatures to serve meat will make you a better cook. Pork chops are a great example of this. They are tastier and juicier when cooked to a lower temperature than the recommended 145 degrees Fahrenheit.

This involves a little attention and a good meat thermometer.  The different techniques and cooking times will vary a little from the grill to the oven or stovetop.   Just remember to stop the cooking process when the pork chop reaches 140 to 145 degrees Fahrenheit.  If you like it rarer you can cook till 135 degrees and let it rest for 5 to 10 minutes, the residual heat will raise the temperature into the safe zone.