The Internal Temperature of Leg of Lamb When Done 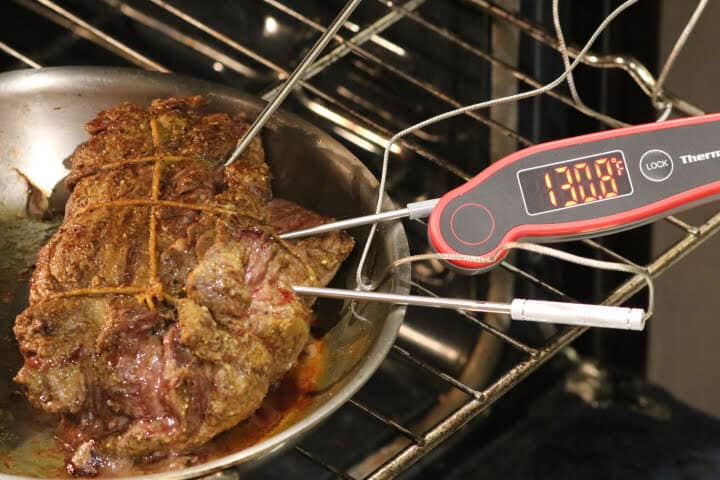 Great you say. What’s the best way to prepare a leg of lamb? You can cook a leg of lamb in many ways. You can roast it in the oven, grill it, sous vide it, or microwave it (just making sure you’re paying attention, no, don’t do this).

Cooking a leg of lamb doesn’t need to be a daunting task. In this article, I will show you some of the best ways to cook a leg of lamb to a proper internal temperature of between 130 and 140 degrees Fahrenheit. Let’s take a look at some of these tried-and-true cooking methods. 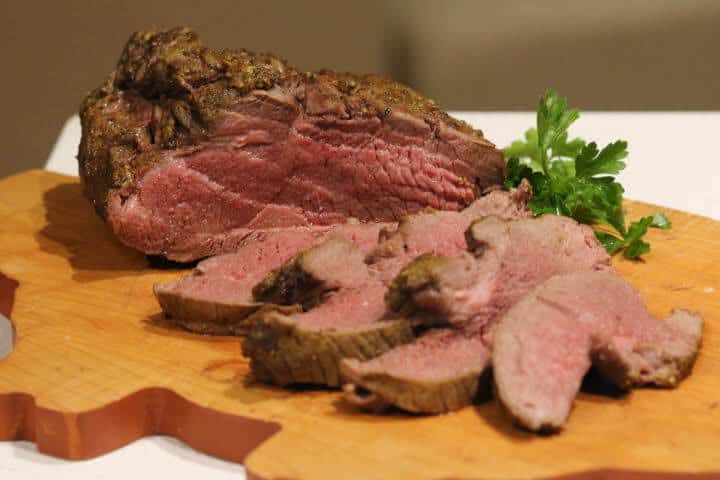 Cooking a Leg of Lamb: Bone-In or Boneless?

When purchasing a leg of lamb you are faced with a few choices. Do you leave the bone in? Do you buy a leg of lamb with the bone already removed (boneless)? Is it more economical to buy a bone-in leg of lamb and debone it yourself?

If you are new to cooking lamb I would suggest going with a boneless leg of lamb. It’s just less of a hassle unless you are confident in your butchering skills. It will cost a little more, but you aren’t paying for the bone and all the fat and gristle you would need to remove with a bone-in leg of lamb. 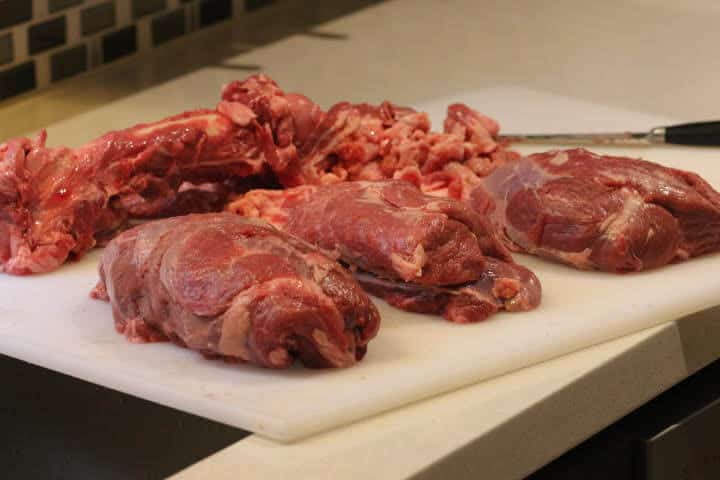 A boned-out leg of lamb divided into 3 pieces. Not an easy task, another reason to go boneless.

Helpful tip: You’ll sometimes find plenty of leftover legs of lamb on discount at your grocery store after holidays such as Easter and Christmas. If you don’t need it right away you can freeze it for later.

Don’t get me wrong, walking to the dinner table with a whole, bone-in leg of lamb is still a show-stopper, there just are some issues you might run into.

Carving a whole leg of lamb takes some practice as you will find yourself running into a lot of sinew and fat as you carve. Another thing to consider is that a lot of the musky flavor or gaminess of a leg of lamb comes from the amount of fat left on the roast.

The Benefits of Choosing Boneless over Bone-In Leg of Lamb

One of the benefits of buying a boneless leg of lamb is that a lot of the fat is removed, as well as any musk glands.

If you are new to lamb or prefer a milder taste, then you’ll want this fat removed as this is where a lot of the lamb’s “lamby” flavor is stored.

This is simply a taste preference. Here’s a more in-depth explanation of why the fat on the lamb imparts a lot of these mutton-like flavors.

Again, this all comes down to personal preference. There’s nothing wrong with the bone-in variety, it just has a stronger lamb flavor and takes a little longer to cook.

How to Cook a Boneless Leg of Lamb

I purchased a bone-in leg of lamb weighing around 6 pounds and then broke it down into smaller pieces. 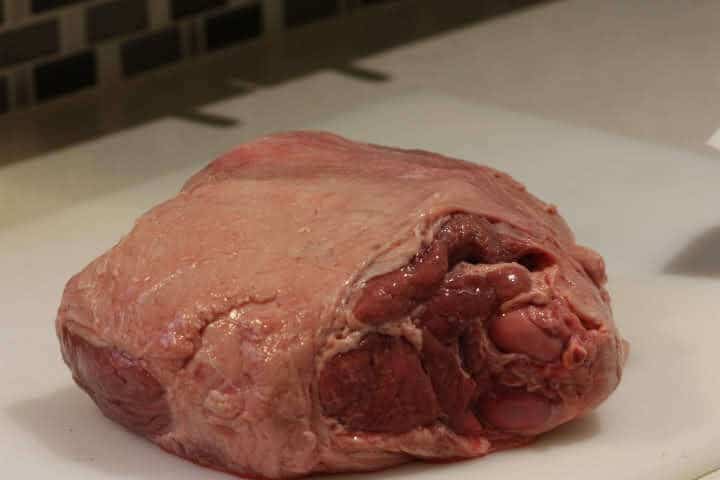 A 6-Pound Bone-In Leg of Lamb……not quite done yet. How do I cook this thing?

I’m not a butcher, so I’ll let this guy show you how.

Yeah, that’s totally how I did it. (My video would’ve been 20 minutes long, filled with expletives.) 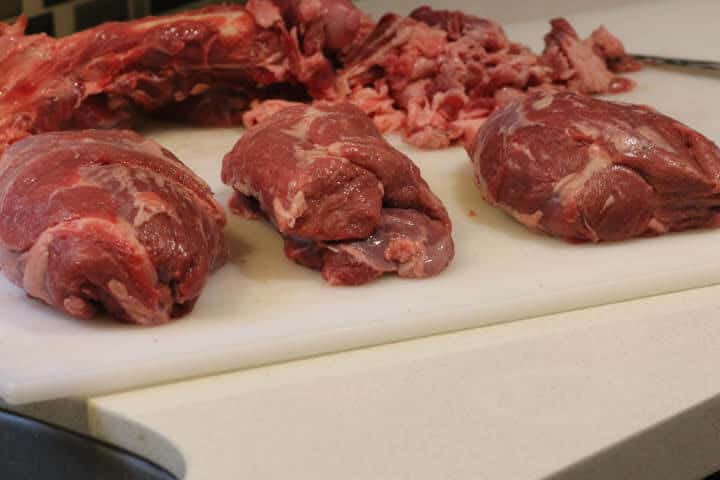 Once you’ve got your 3 smaller roasts you can either tie them up or keep them flat and pound them a little thinner to cook them butterfly-style (see the grilled butterfly technique below).

After tying up the boneless lamb leg you have a few options. You can either marinate the meat, brine it, or apply a dry rub with spices of your choosing and cook it straight-away.

A quick brine of sugar and garlic cloves is an easy way to impart flavor if you’re in a hurry. Dissolve a quarter cup of sugar into a couple of quarts of water along with slightly smashed garlic cloves from a bulb of garlic.

Submerge the lamb in the brine for a few hours (don’t go longer than 4). Pull it out of the brine and pat dry, it’s ready to roast.

Leg of lamb is also a great cut to marinate. A marinade of greek yogurt, garlic and Indian spices like Garam masala is a classic flavor combo. The yogurt marinade will also lessen a pungent lamb flavor.

In the pictures below, I just did a quick dry rub of whatever spices I had on hand. 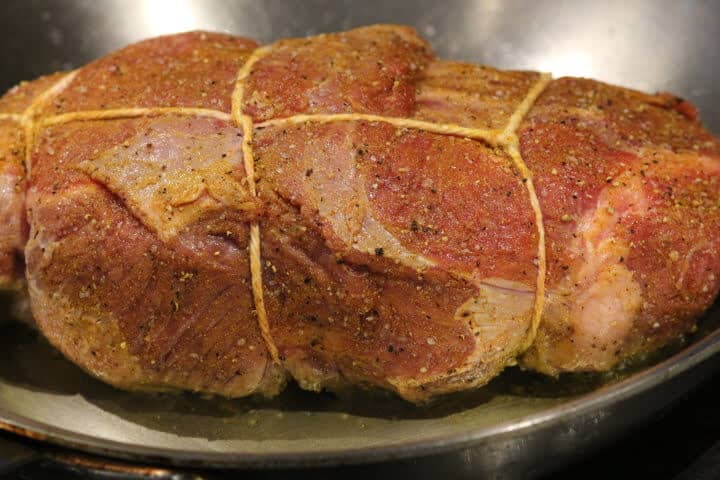 I used a dry rub of salt, pepper, coriander, turmeric, and a pinch of curry.

First, get your oven ready by preheating it to 400 degrees Fahrenheit/204 degrees Celsius.

Next, I heated a skillet over medium-high heat with a tablespoon or 2 of olive oil. When the oil was hot I carefully added the lamb roast to the pan.

Searing a leg of lamb on all sides in a skillet. Make sure each side has nice browning before rotating to the next side.

Leave it in the pan for 2 minutes. After two minutes use tongs to rotate the lamb around, making sure each side gets a nice brown crust on it.

Place the skillet with the leg of lamb in your oven on the middle rack. I like to stick a couple of oven meat thermometer probes to track the internal temperature of the lamb as it cooks.

Or, if you’ve got other things to do and need to monitor your lamb from farther away, a Bluetooth thermometer with a 500-foot wireless signal range like the ThermoPro TP-25H2 is always handy. 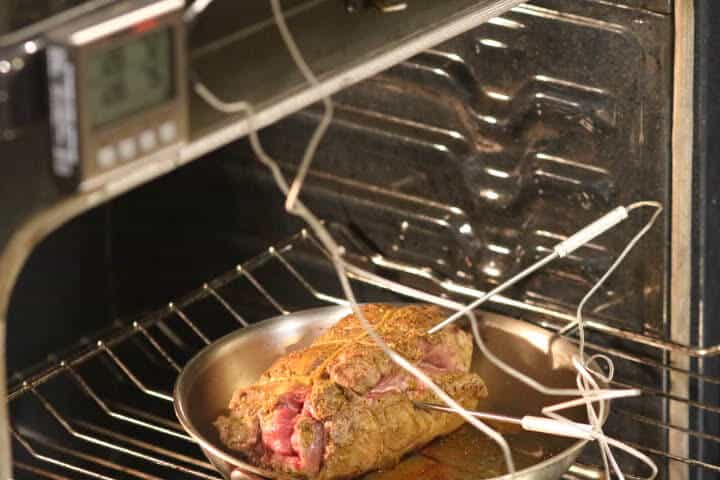 Tracking the internal temperature of a leg of lamb in the oven with the ThermoPro Tp 17 oven meat thermometer. 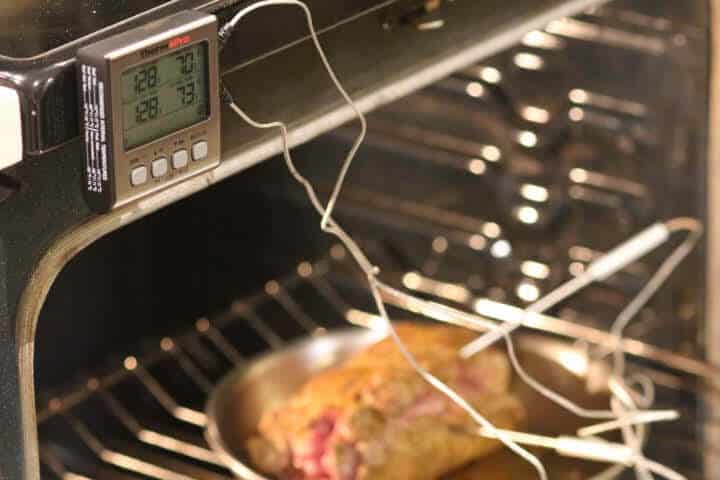 The internal temperature of the leg of lamb is 128 degrees, time to pull it out of the oven and let it rest for ten minutes.

Once the leg of lamb reaches 128 to 130 degrees Fahrenheit/53 to 54 degrees Celsius, pull it out of the oven, tent it with foil and let it rest for 10 minutes. 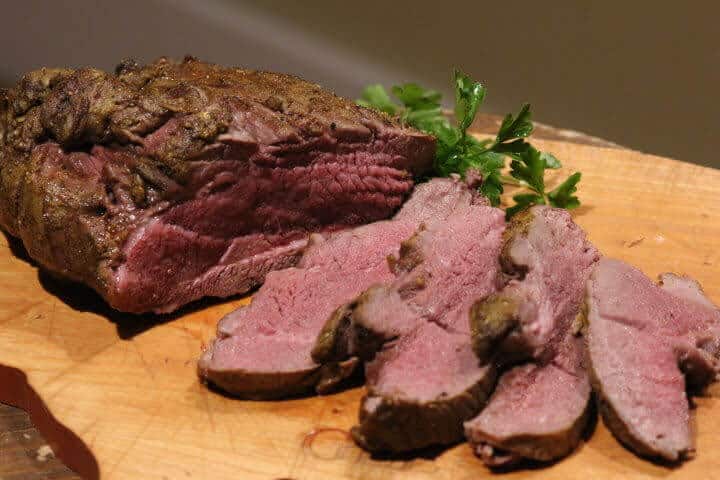 A different angle of the shot from before, stylish garnish still there.

Instead of cooking a tied-up boneless leg of lamb, you can keep the meat flat and pound it thinner to grill it on the bbq.

This is the best time to marinate your leg of lamb in whatever you desire. Make sure there isn’t too much sugar in your marinade as that has a tendency to burn on the grill. A tablespoon of sugar or honey should do the trick in your marinade.

Marinate your lamb at least 4 hours but probably no longer than 12 hours. Your lamb will become mushy at a certain point from over-marinating too long.

Set up your grill for direct grilling, you want it hot, but not too intense as to burn the marinated meat, think medium-high heat.

Grill the lamb on each side around 10 minutes per side. Pull the lamb off the grill when it reaches an internal temperature of 130 degrees Fahrenheit. Let it rest for 10 minutes and slice it across the grain. You’re ready to eat! 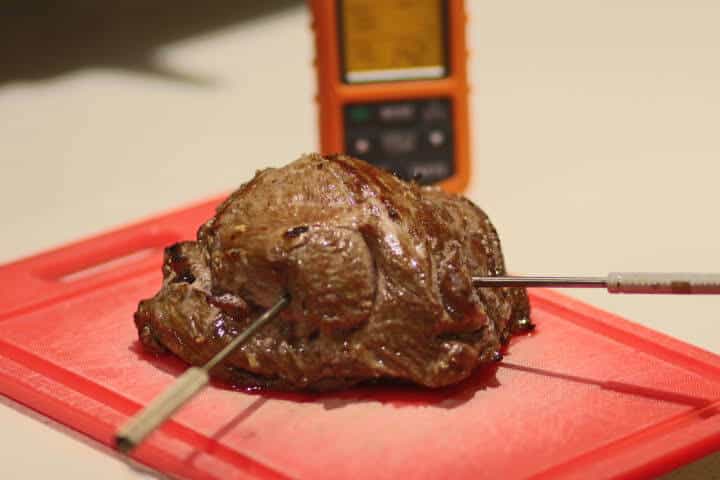 Oven-Roasted leg of lamb resting on cutting board before serving, the internal temperature is at 142 degrees Fahrenheit. 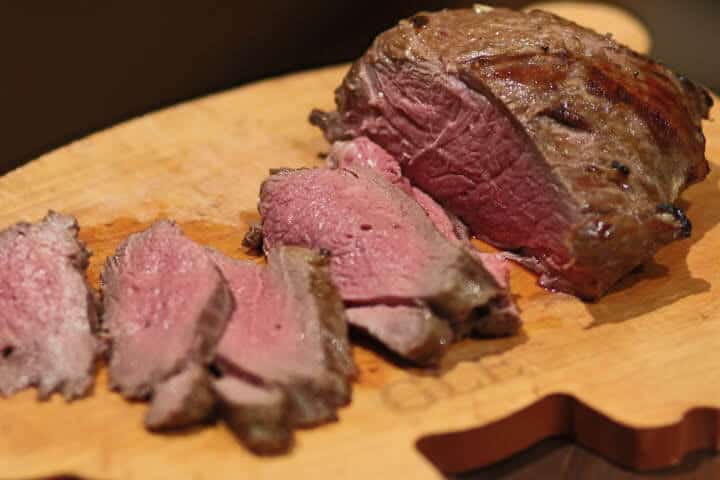 Ah yes, the traditional way to cook a leg of lamb. First, preheat your oven to 450 degrees Fahrenheit.

Rub olive oil over the lamb as well as rosemary (3 or 4 twigs worth). Salt and pepper the outside as well.

Next, take a sharp knife and make some incisions in the meat around an inch deep.

Place the leg of lamb in the oven for 20 minutes. At the twenty-minute mark, turn the oven down to 325 degrees and continue to roast until the internal temperature in the coldest part of the meat reaches 125 to 130 degrees Fahrenheit.

Pull the lamb out of the oven, tent it with foil, and let it rest for 15 minutes. Slice meat across the grain to serve, making sure to cut around and discard any sinewy bits.

Cooking a leg of lamb doesn’t have to be complicated. If you are cooking lamb for the first time it is advisable to go with a boneless leg of lamb. It doesn’t have as much of the fat that can give lamb its pungent flavor and it cuts down the overall cooking time as well.

Lamb is also great when it’s brined or marinated beforehand and it is versatile in a variety of cuisines from Greek to Indian food. If you haven’t ventured into the world of lamb, there’s a recipe for every taste bud.

For more cooking tips and information on the best cooking and serving temperatures of your favorite foods, check out the menu above. Now go cook some lamb!