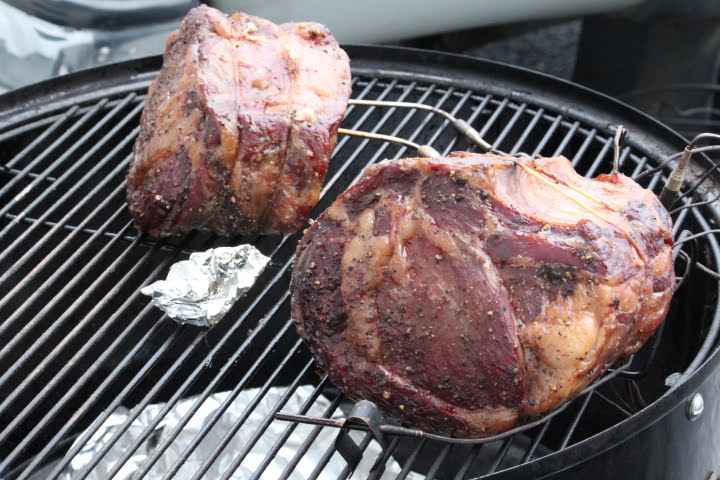 Finding the right smoking temperature is the key to how to smoke a prime rib roast.

When cooking a prime rib roast, whether in the oven or the smoker, your main goal is to evenly cook your roast from edge to edge. 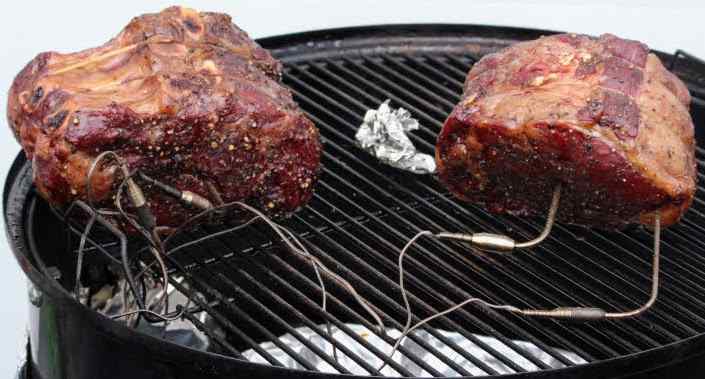 Smoking a bone-in and a boneless prime rib roast.

A smoking temperature anywhere between 200 and 225 degrees Fahrenheit is the perfect temperature to ensure that your smoked prime rib roast is evenly cooked with no grey band of meat around the outside.

What is the best way to smoke a prime rib roast? Bone-in or boneless?

You can do it either way.

A boneless and bone-in prime rib roast will both turn out great as long as you maintain a gentle smoking temperature of between 200°F and 225°F. 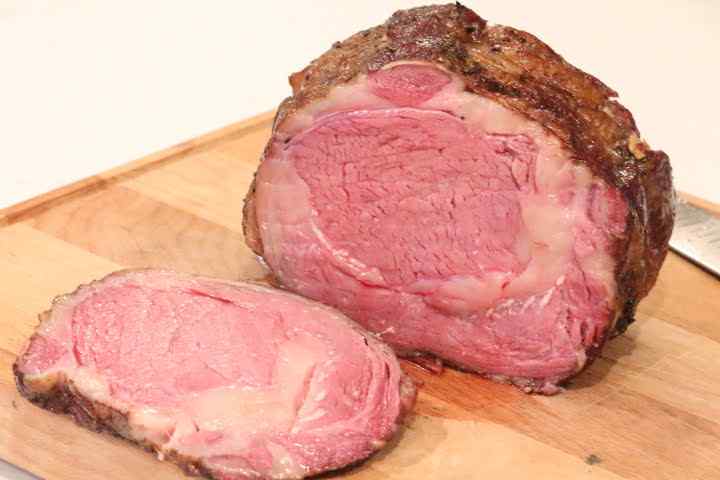 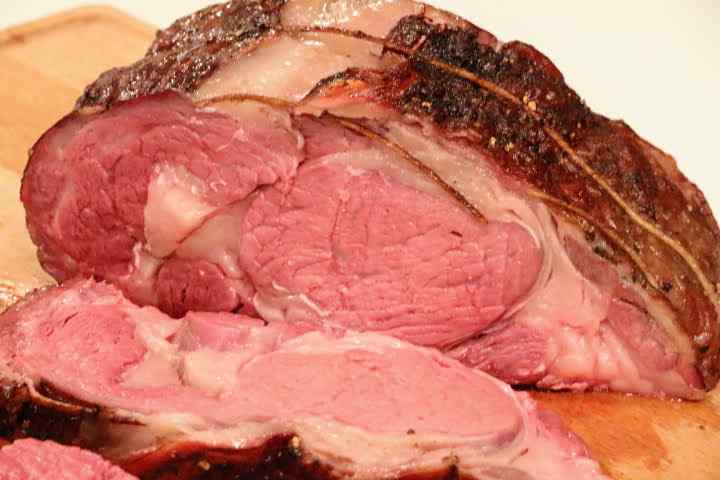 A bone-in smoked prime rib roast with the bones cut away. (Chuck end of the ribeye displayed.)

Here is how to smoke a prime rib roast with an evenly cooked, juicy interior with a flavorful exterior crust. A condensed, step-by-step recipe is at the end.

What is a Prime Rib Roast?

The reason it is called a “prime” rib roast is that butchers consider it the best part (or prime part) of a steer.

Near the center of the roast there is a section known as the eye (longissimus dorsi), hence the name ribeye roast. 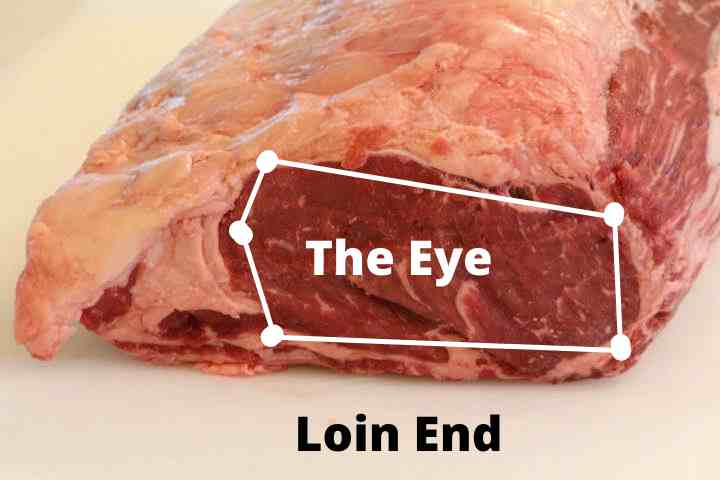 There is more of the tender eye section toward the loin in a prime rib roast.

The eye is a much sought-after center-cut of beef known for its meatiness and exquisite marbling.

This prized eye section starts out small in the chuck section and gets progressively larger towards the loin end before terminating around the hip section of a steer. 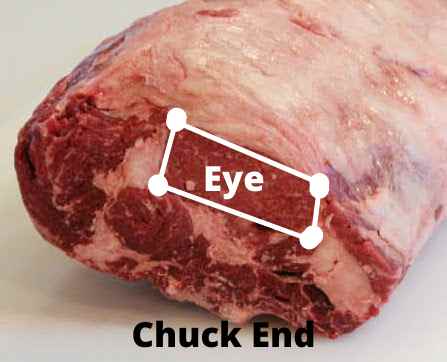 The eye section is dramatically smaller towards the chuck end of a ribeye roast.

This “eye” muscle runs down the back of a steer outside the ribs and through the chuck, rib, short loin, and sirloin primal cuts. 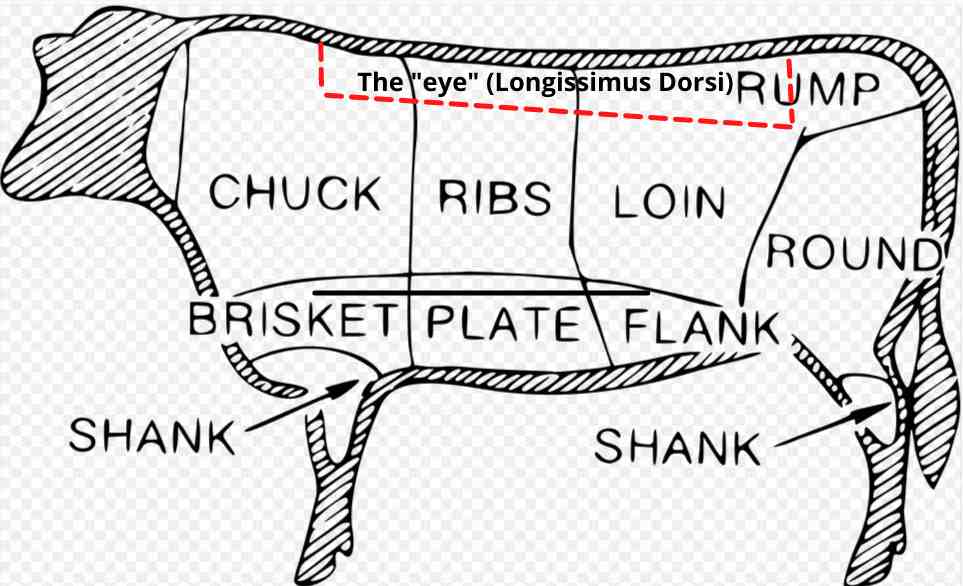 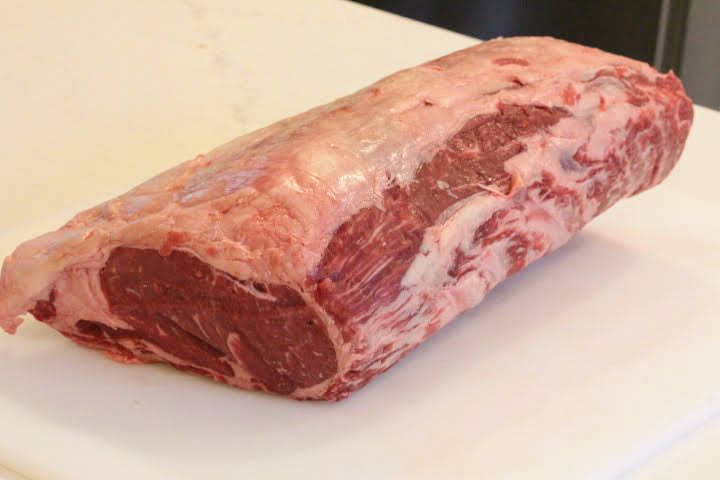 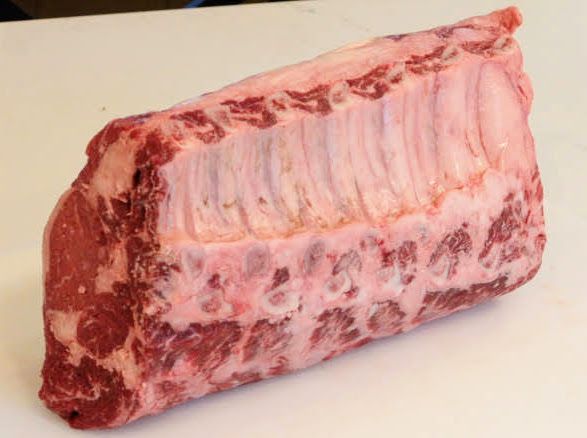 A whole bone-in prime rib roast has seven ribs and weighs on average around 15 to 20 pounds.

It is also known as a standing rib roast because it stands on its ribs as it roasts as the rib bones keep the meat elevated off the pan.

Butchers will often cut the whole rib roast into two distinct cuts, known as the first cut and second cut. 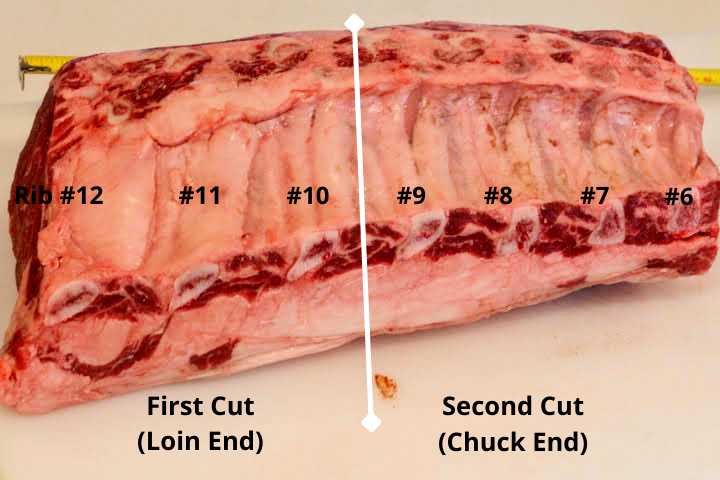 The first cut consists of ribs 12 through 10 and is prized for its larger eye section of meat.

A second cut consists of ribs 6 through 9 and the eye section gets progressively smaller the closer you get to the chuck end. 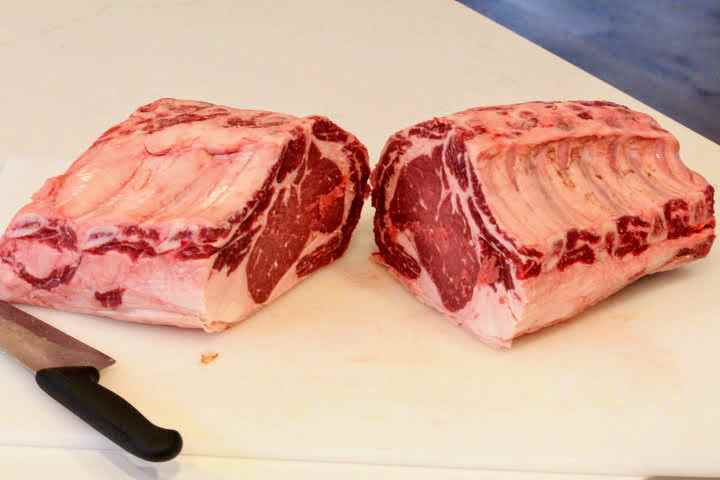 A whole roast can also be sectioned off into even smaller roasts consisting of just two bones.

Are there benefits to leaving the rib bones on prior to smoking a prime rib roast? There can be.

Do the bones add extra flavor? No, they don’t.

If left on, the ribs can act as an insulator against heat if your rib roast is placed properly in your smoker

To see if there were any benefits to leaving the ribs on versus removing them prior to smoking I decided to smoke both a boneless prime rib roast and a bone-in prime rib roast.

To do this, I portioned the 10-pound, four-bone, second-cut rib roast from the photos above into two, 5-pound roasts. 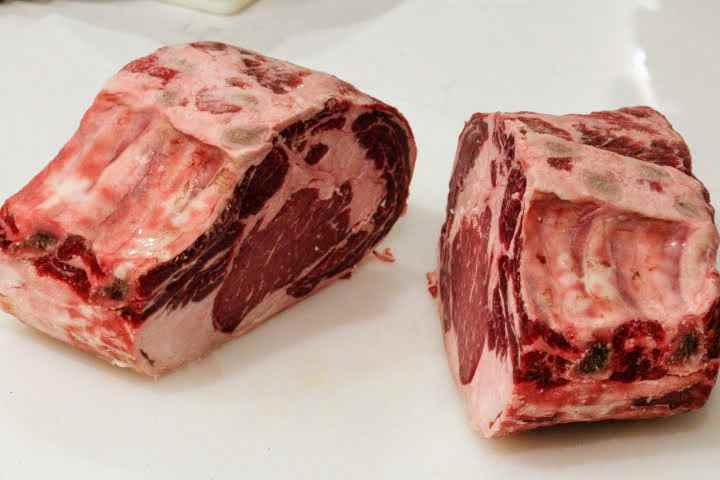 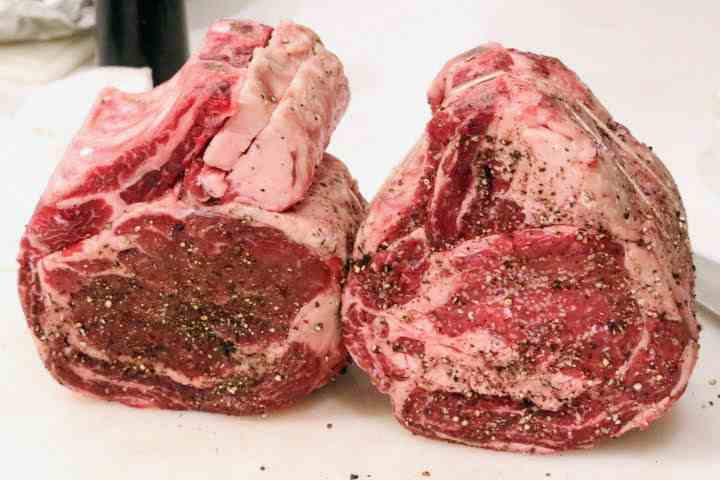 Next, I removed the ribs and some of the fat cap on one of the roasts. 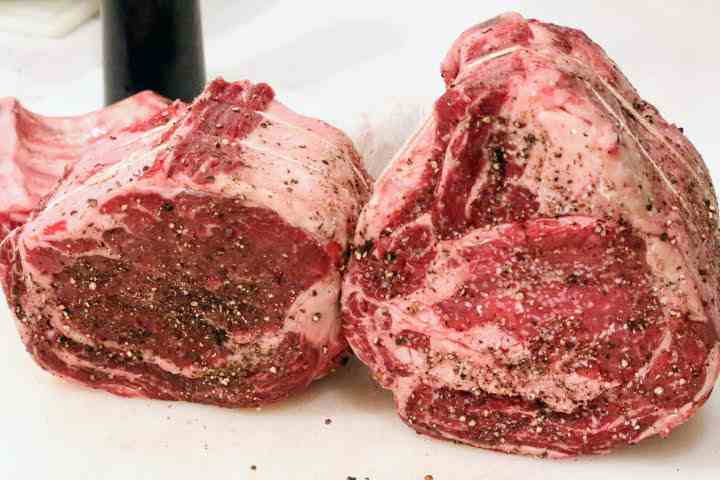 I then tied the outside of the boneless rib roast with butcher’s twine into a more circular form for even cooking.

I also tied the bone-in rib roast to keep the shape of its meat somewhat in proportion with the boneless roast as well.

Both roasts were seasoned with salt and pepper and allowed to rest uncovered overnight on a rack over a pan or plate in the refrigerator.

Why is it a good idea to season your rib roast well in advance of cooking? Here’s why.

It’s a good idea to salt your prime rib roast with kosher salt well in advance. Also known as dry brining, salting your meat ahead of cooking and allowing it to rest has many benefits.

These benefits include a more deeply and evenly seasoned roast as well as a juicier roast due to better moisture retention.

A more in-depth explanation of dry brining can be found in the post: How to Smoke a New York Strip Roast.

How much kosher salt should you use to season your rib roast and how long should you let it rest?

A general rule of thumb is a half teaspoon per pound of meat. You can go more or less depending on your personal preferences.

On a five-pound rib roast that equates to 5 1/2 teaspoons or 1.8 tablespoons of kosher salt (you can round up to 2 tablespoons).

To get the benefits of dry brining you will want to let your roast rest after salting for at least six hours, but preferably overnight up to 24 hours ahead of time. 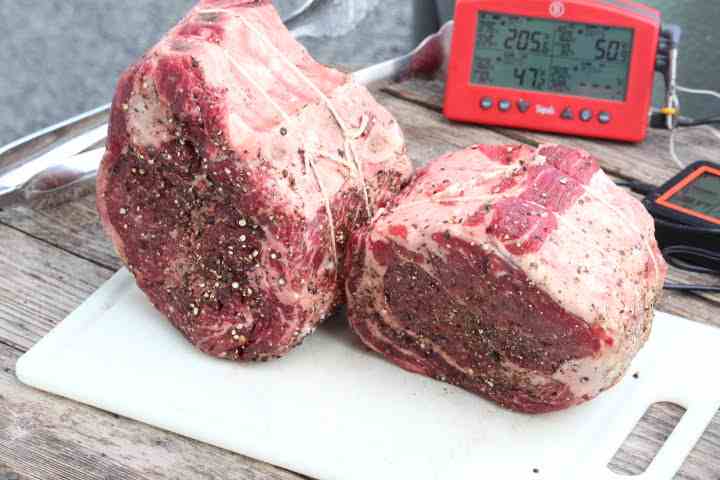 Ready for the smoker.

The Best Temperature to Smoke a Prime Rib Roast

An evenly-cooked, rosy-pink interior is the goal when smoking a prime rib. A low smoking temperature is necessary to achieve even cooking throughout the roast.

A low smoking temperature of anywhere between 200°F to 225°F will allow the entire roast to come up to temperature slowly and evenly. 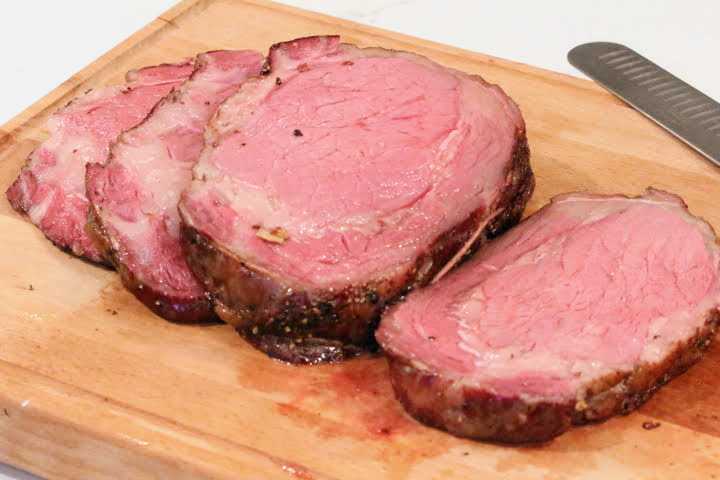 If you’re cooking a four-bone, 10-pound prime rib roast it is also a good idea to portion it into two sections as it is difficult to get such a large piece of meat to cook evenly from edge to edge.

You will get better results cooking two smaller roasts, with more of the meat exposed to smoke as well as less overall cooking time.

Setting Up Your Smoker and Amount of Wood

You know your smoker better than I do. You’ll need to get your smoker ready for a 3 to 4-hour cook at a relatively low temperature of 200°F to 225°F.

Using a thermometer with an ambient temperature probe at the grill grate level is the best way to track your smoker’s temperature.

The best way to ensure you maintain this temperature is to give yourself plenty of time beforehand.

I like to light my charcoal starter at least an hour before a cook, and then give my smoker between 30 to 40 minutes to get a consistent temperature.

Give yourself even more time if you’re unsure about getting your smoker to a consistent temperature.

Trust me, there’s nothing worse than having to wrangle the temperature down while you’re smoking. It’s better to get it locked in before you start.

How much wood and what type of wood? I prefer to use wood chunks over chips, but you can use what you have on hand.

Wood chunks don’t ignite and burn up right away like wood chips. I like to place the chunks near the edge of the hot coals where they will slowly start smoking.

Oak, mesquite, and pecan are good choices but any smoking wood will work.

I like to use two fist-sized amounts of wood chunks over the entirety of the smoke, one fist at the beginning and one at around the two-hour mark.

How long does it take to smoke a prime rib roast? It depends on the size of the roast and the smoking temperature.

Smoking a prime rib roast at 225°F will generally cook at a rate of 35 minutes per pound to get to an internal temperature of 120°F.

The time of cooking rate will go up if you smoke at a lower temperature. I smoked both the boneless and bone-in prime rib roasts around 200°F and they both cooked at a rate of 45 minutes per pound to get to an internal temperature of 120°F. 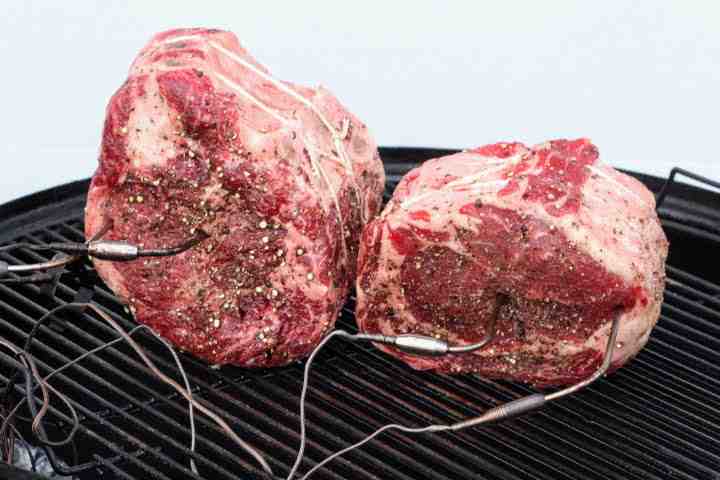 Tracking the internal temp of both the bone-in and boneless prime rib roasts on a Weber Smokey Mountain Smoker.

Both rib roasts weighed around 5 pounds the previous day before the removal of the bones on one making it a boneless roast.

The boneless prime rib roast weighed a little under 4 pounds after removing its bones. How did this affect the cooking time? 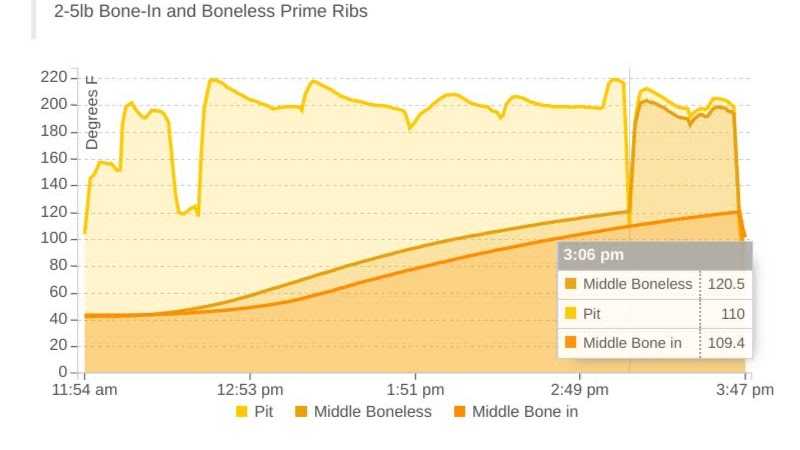 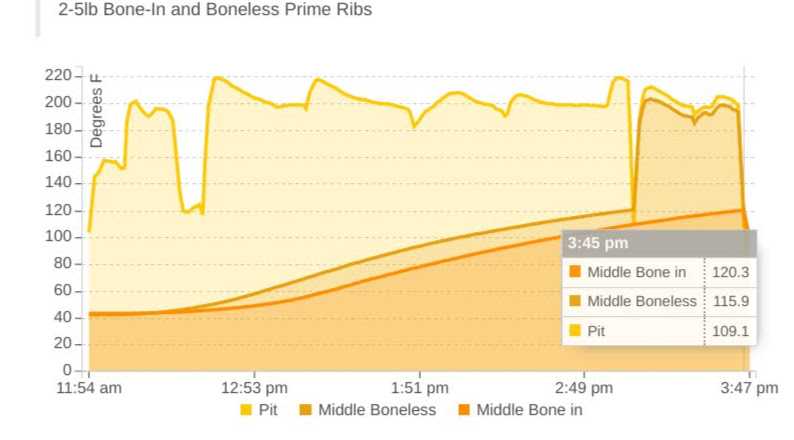 The 5-pound bone-in prime rib took around 3 hours and 50 minutes to reach an internal temp of 120 degrees Fahrenheit.

That isn’t much difference in terms of the rate of cooking per pound but the bones did add an extra 40 minutes to the cook.

Did the bones add anything in terms of extra flavor or quality of the meat? Not really. 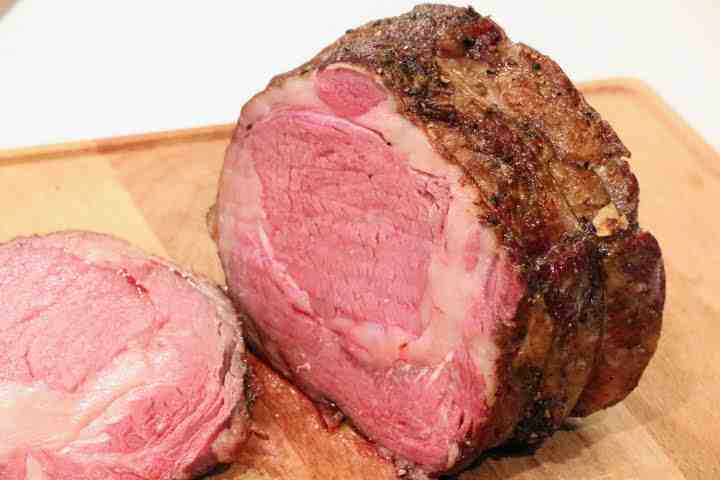 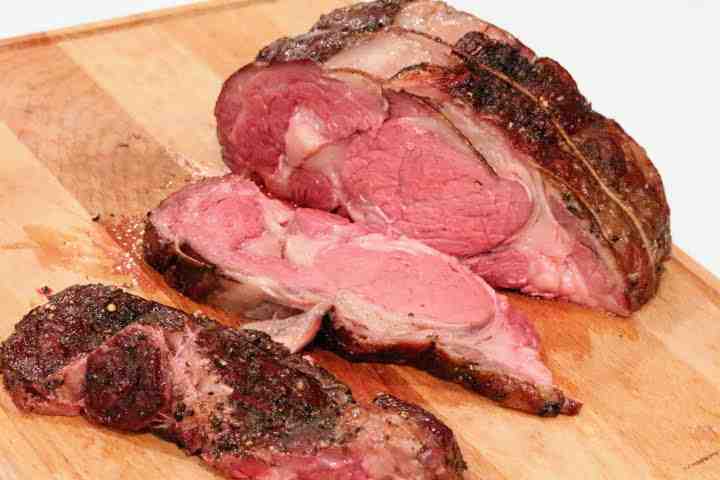 What is the takeaway from this then?

The key point is that it is very hard to overcook your smoked prime rib, whether it is bone-in or boneless, as long as you maintain a low smoking temperature of between 200°F and 225°F.

You can leave the bones in if you want, but it will add more cooking time and not much else to the finished product.

There are people that consider cooking a prime rib to an internal temperature of 120ºF as overcooking it.

If cooked conventionally at a higher temperature I might agree with them.

The reasoning is that there will be the obligatory extra 10 degrees (or more) of carryover cooking after you pull your prime rib from the heat.

However, the amount of carryover cooking is less significant when cooking or smoking a prime rib at lower temperatures, such as 200ºF. 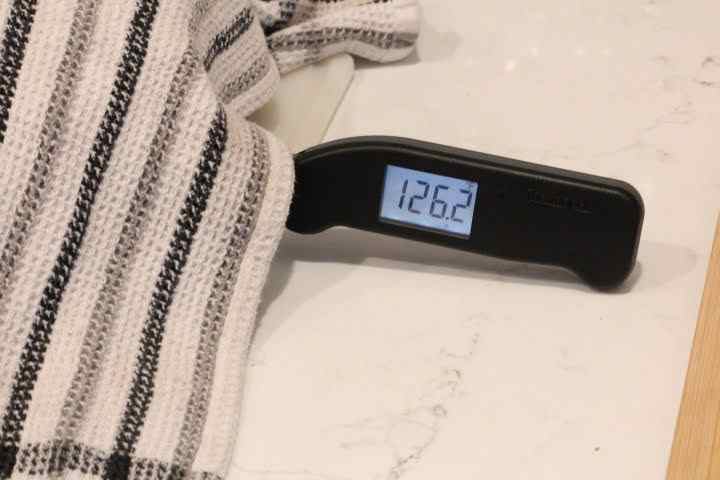 A smoked prime rib roast tented after smoking and displaying an internal temp of 126.2 degrees Fahrenheit after 30 minutes of resting on a Thermapen ONE thermometer.

Smoking a prime rib at a temperature of 200ºF to an internal temperature of 120°F will give you a nice rare to medium-rare doneness from 125ºF to 128ºF.

There are many schools of thought about what is considered rare, medium-rare, etc.

There is usually an overlap of 5ºF in each category, some temperature charts are higher, some lower.

You can certainly just smoke your prime rib, let it rest, then carve and serve it, but searing it over high heat at the end gives it a nice flavorful crust. 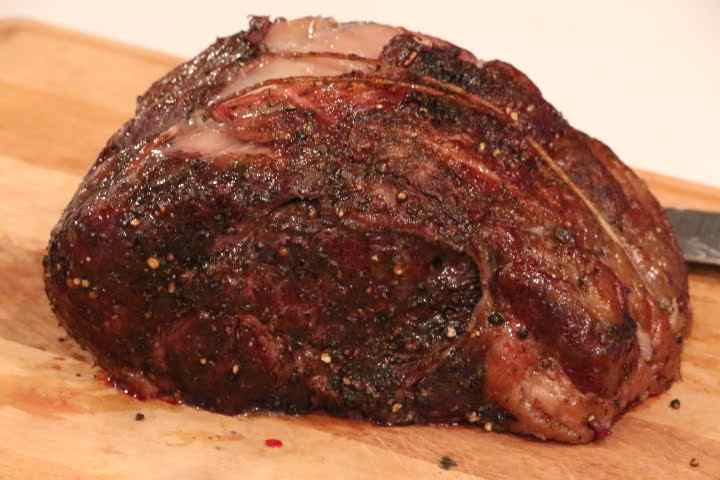 Should you rest the prime rib first before searing it or sear it after you pull it from the smoker?

I’ve done it both ways and have found little difference between the two methods.

Whether before or after searing, you still need to rest your prime rib before slicing into it.

Allow for 30 to 40 minutes of resting if you do decide to rest the prime rib whether before or after searing.

How long should you sear it for? All it takes is one to two minutes a side over high heat.

The sear can be accomplished in a large pan with some olive oil or butter, or on a grill, both methods work well.

Once you’ve achieved the desired outside appearance and allocated enough time for resting you’re ready to eat!

Oh, and one more thing. If you found this article helpful could you please give the recipe below a rating by clicking on the stars below the photo? Thank you, it is appreciated, and enjoy your prime rib.

Fat for Searing Step (either or, not both)

How to Smoke Turkey Thighs