And unlike many remote meat thermometers, it is also rated IP66 waterproof, meaning that it is protected from powerful jets of water.

You most likely won’t shoot powerful jets of water at your thermometer, but I think this thermometer should be able to withstand some rain. The ChefsTemp Quad XPro Remote Meat thermometer transmitter is on the left and the receiver is on the right.

A thermometer that is protected from moisture is critical if you live in a rainy climate as I do.

With three food temperature probes and one ambient temperature probe, the Quad XPro is a compelling option if you’re looking for a remote meat thermometer to monitor multiple items on your grill or smoker from afar.

In this review of the ChefsTemp Quad XPro Remote Meat Thermometer, I will examine its features, usability, accuracy, durability, and price to determine where it ranks amongst the other remote wireless meat thermometers on the market. 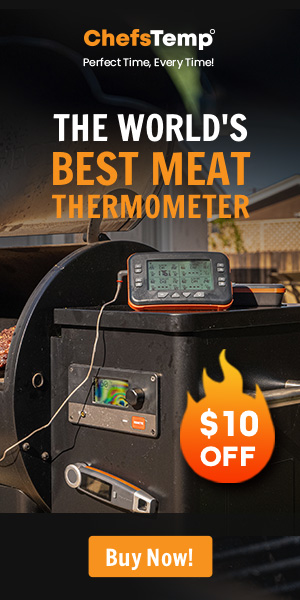 The Quad XPro Remote Thermometer is the only multiple probe meat thermometer that ChefsTemp produces so far. If you’re unfamiliar with ChefsTemp, they are a brand of Leadtek Inc., based in California.

Leadtek Inc is a company that is focused on designing intelligent electronic home and kitchen products. Their technical support, researchers, designers, and operations teams are based across the US, while product assembly is done in Asia.

ChefsTemp has actually been around for quite a while. Here is what a company spokesperson communicated to me,

“With decades of experience and history in thermometer technology, from initial analog thermometers to digital thermometers, we are always striving to take the lead in the industry and provide the perfect combination of technology and kitchen life to our customers.”

The Quad XPro is a testament to this expertise and experience.

With four probes, an IP66 waterproof rating, and a strong wireless signal range, the Quad XPro has all of the necessary features that you’re looking for in a remote meat thermometer for grilling or smoking.

Let’s look at everything that comes in the box. 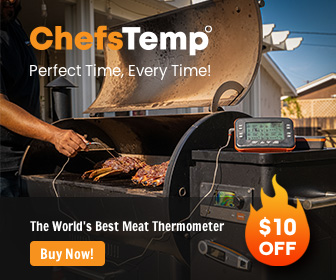 Features and Components of the Quad XPro

Here are the components and features included with the Quad XPro Remote Meat Thermometer. The transmitter has a display that’s 3.66 inches long and 2.09 inches tall with 4 separate channels displayed on the screen. Each channel displays the High Alarm, Low Alarm, Alarm on or off, Current Temperature, and the Maximum and Minimum Temperatures for that probe channel.

There is also a low battery indicator, the volume level of the alarm, and the transmission signal indicator as well.

There are set alarm buttons as well as an alarm on/off button for each probe channel as well.

Pressing the backlight button on the bottom will illuminate the display for twenty seconds. The back of the transmitter has a power button, a Celsius/Fahrenheit selector, a calibration button, and a transmission signal button.

There is also a USB-C port on the side of the transmitter that you can use for power in lieu of the 2 AA batteries that are required to run the unit. Be mindful that this thermometer doesn’t come with a USB cable or charger and mainly runs on batteries, which aren’t included either. The receiver displays all of the same information as the transmitter, minus the minimum and maximum temperatures reached for each channel. The receiver has just two buttons for power/backlight and volume.

There is also a fold-out stand in the back as well as a clip on the top to attach a lanyard to wear around your neck if that’s your thing.

The stainless steel probes are 7 inches long with probe cables that are 50 inches long. To minimize confusion about which probe is in what meat on the grill, there are yellow, green, red, and blue silicon rings to put around the probe handles and port plugs.

A grate clip is included to keep the ambient temperature probe off the hot grill grate.

Usability of the Quad XPro

Operating the Quad XPro is straightforward with all of the main control functions located on the larger transmitter device. To set a temperature alarm for any of the probe channels you will press the set button. The high alarm digits will begin flashing. You will then use the + or – buttons on the front to adjust the temperature up or down. Press “Set” again to confirm.

The low-temperature alarm digits will then begin flashing. You will then use the + or – buttons to adjust that temperature and then press the set button again to confirm.

That’s all you need to know about setting the temperature alarms for each probe channel. Pretty easy.

The volume button controls the volume and the backlight button illuminates the display screen for 20 seconds.

The wireless signal range is legitimate. I was able to consistently receive a signal 400 feet away down the street from the transmitter located in my kitchen.

The wireless signal is also strong enough to go through multiple walls.

Accuracy of the ChefsTemp Quad XPro

Having used this thermometer for over a month on various cooks and temperature tests, I can attest to its accuracy. Monitoring the internal temp of bratwurst.

Tracking the temp of pork tenderloin as well as the grill temp. The ChefsTemp Quad XPro measures the water temp of a sous vide bath with other highly accurate thermometers.

The Quad XPro was responsive and accurate in all of the cooks and tests I subjected it to.

The bodies of both the transmitter and receiver are well-made with the previously mentioned IP66 waterproof-rated moisture protection.

There is also a rubber gasket seal around the outside of both the transmitter and receiver for further protection against foreign particle infiltration. As I’ve stated many times before in previous reviews, durability is a trait measured over time. It is too soon to definitively state the durability of this thermometer.

What I can say is that its waterproof rating and overall build quality have put it in a good position to be one of the more durable thermometers I’ve tested.

How does the ChefsTemp Quad XPro compare to the other remote wireless meat thermometers on the market?

Get 15% off the Quad XPro by following the link below, and using the code, chefstemp2022
Cook like a pitmaster now at ChefsTemp

The two main competitors in the remote wireless meat thermometer market are Thermoworks and ThermoPro. They both produce quality products.

Thermoworks is the undisputed leader in the thermometer arena with unrivaled accuracy and waterproof capabilities while ThermoPro also produces many highly rated thermometer products as well.

The Quad XPros’s price tag of between $110 and $120 is above many of the remote thermometers produced by ThermoPro, but also below some of the models from Thermoworks. The competition in the remote meat thermometer category has increased in the last few years, and so have the wireless signal range capabilities of the newer models.

The Thermoworks Smoke X4 is easily the outright winner in terms of signal transmission with a reported 6,562-foot wireless signal range. This is the best-case scenario if there are no obstacles in the way. The Quad XPro and the Thermoworks Smoke X4 monitor the temperature of a sous vide bath.

With four-probe capabilities and unsurpassed accuracy, it is the best remote meat thermometer you can buy. The Thermoworks Smoke has a more modest 300-foot signal range but is very accurate and has the aforementioned IP66 waterproof rating. It comes with just two probes, one of which is an ambient temperature probe and one food probe.

The ThermoPro TP829 boasts a 1000-foot wireless signal range and has four probes as well as an IPX4 waterproof rating. The ThermoPro TP826 is a dual-probe remote thermometer with a 500-foot wireless signal range.

The ThermoPro TP28 is another dual probe remote meat thermometer with a 500-foot wireless signal range and rated IPX4 waterproof.

With four probes, an IPX4 waterproof rating, and a 500-foot wireless signal range, the  ThermoPro TP27 is very similar to the TP829, albeit with a shorter signal range.

Product prices and availability are accurate as of the date/time indicated and are subject to change. Any price and availability information displayed on [relevant Amazon Site(s), as applicable] at the time of purchase will apply to the purchase of this product.

Prices pulled from the Amazon Product Advertising API on:

I give it high marks for usability, accuracy, and durability.

None of the lower-priced remote meat thermometers feature the same waterproof capabilities as the Quad XPro. If you do a lot of grilling and smoking outside uncovered then this is a feature that you will value greatly.

At its current price point, I consider it a good value and a nice addition to any griller or smoker’s toolkit.

Get 15% off the Quad XPro by following the link below, and using the code, chefstemp2022
Cook like a pitmaster now at ChefsTemp